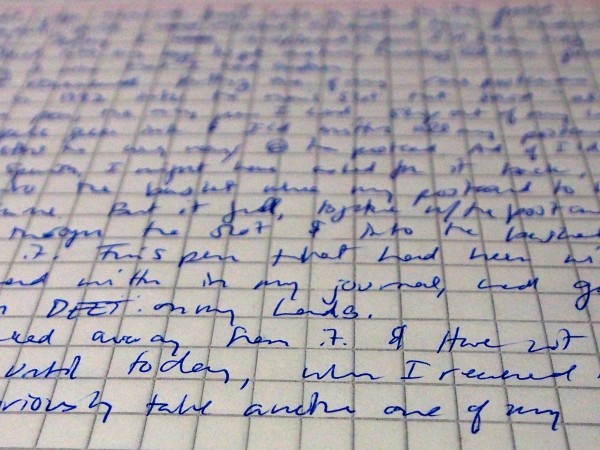 What jogs memories free? Like money in the pocket of a jacket you’ve checked a hundred times for change, and found nothing, until one day, there it is, small, yet important. Today I misplaced a pen I’d been using, and reached into my bag to get another, and thought about how good a thing it was that I had another pen.

And I remembered mailing one of the rare postcards I sent when I was traveling around Central America in the 90s, this time from Guatemala. The mail slot in the post office in Guatemala City was a few fingers wide, and had a sign above it that said “al extranjero.” I wanted to make sure to put my postcard in the right place, lest it make the rounds of Guatemala endlessly, unable to get home. As I chose where to put it, and slid the card through, I felt my pen, the only pen I had, slip out of my hand. It had pale green ink and I’d written all my postcards with it, in tiny letters the wrong way across the card to fit more text, and in my journal, too, in all caps when I was feeling confident but staid, and scrawly when I was annoyed, or unsure or lonely.

If I’d had a better command of Spanish at the time, I might have asked for it back, asked someone to go through the basket where my postcard to home had landed to please get my pen for me. But it fell, together with the postcard it had written, through the slot and into the basket and I felt nostalgia for it. This pen that had been with me for eight weeks already, writing big messages in small letters. I’m ok! I dry my underwear by looping it on the spinning fan! Today we saw an overturned bus! I am so sick of being sick! The pen had gotten tacky to the touch with the use of high-concentration DEET in some humid town, and now it was gone.

But I walked away from it and I must have gotten another, and have not thought about it again until today, when I reached into my backpack, and I suppose, into my brain, and pulled it out, the pen and the memory, one of which I suspected I had and the other one I had no present day consciousness of.

A memory jostled, unpacked from wherever it was hiding by the simplest task. Part of me wonders what else will get jogged or jostled or loosened in the coming days, and if it will be from the same geologic time, the same memory strata, or perhaps from some other era, entirely.

* Yes, that is really my handwriting (and this piece). I actually wrote this longhand. You know, with a pen.