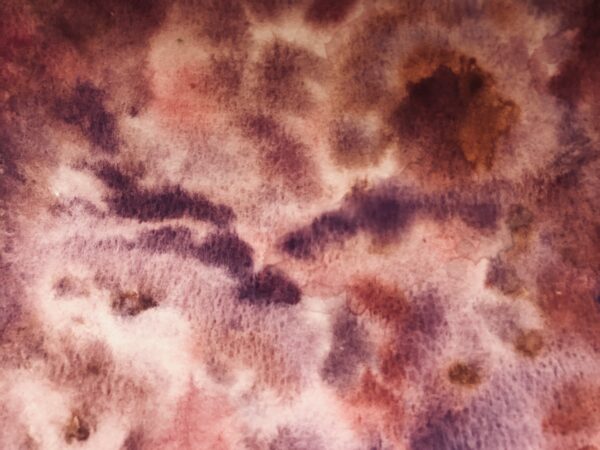 This is what my brain looks like on fever.

Laying in bed in a feverish haze, thank you science, my overreactive immune system (and a 3rd Pfizer shot), I snuggled deeper into a pile of blankets and duvets in the warm Chilean summer temperatures that would normally have me using just a sheet or at most, a single blanket. In my freezing mind, I was surrounded by this amazing colored mist, a diaphanous swirl of maroony brownish hues, that settled into a solid, cozy sense of a color somewhere in the #854b5b Pantone family and kept me warm. Above you will see it rendered (badly?) in watercolor, which I have recently picked up in a post-Covid fueled pursuit of finally putting down on paper what I see in my brain.

Some years ago, I figured out, with help from my sister, that not everyone sees colors in sensations and foods that they eat. Historically I have not liked the sound of the violin at its highest pitch because it tastes like copper pennies in my mouth, and the pinching pain in my shoulder earlier in the pandemic looked like the cold, tinny light an arc welder gives off, and tasted something like static electricity. These sensations are roughly related to synesthesia, a sort of crossing of the senses where sometimes letters have colors and colors have tastes and so on. I didn’t know for the first 30 years of my life that this was not a widespread ability? excess? skill? and that only some of us were wired that way.

Perhaps similarly, we all learned the word aphantasia in the mid 2000-teens (or you’re about to learn it now). Aphantasia is the inability to picture things in your mind. What happens when you think of a green apple, for example? Do you see a green apple somewhere in there? Most of us do. But if you are someone who does not, you might have aphantasia. Another split in the wider world, those of us who see things in our minds, and those of us who do not.

After many months, nay years of me not having a massage, re: Covid, a person I have gotten massages from before started seeing clients again. I decided I would go see her, both because yay massages, and also because lingering shoulder pain (of arc-welding pain), which I suspected could be partially due to tightness in one of the teres muscles, which I don’t really have the flexibility or strength to release on my own.  During the massage, which was great, I started to have a very particular visualization. This is not uncommon for me, as anytime I get any kind of bodywork, and also often when I meditate, I see specific things. Shapes, colors, shades, shifting, sometimes kaleidoscopic and in motion, sometimes a single hue, strangely the color of Lago General Carrera. This time it was a carnation-pink background with a large, benevolent 8-legged creature hanging in midair.

I left the massage thinking about how it was too bad that though when i have thoughts, I can leave myself a voice message or take notes, and in this way remember them or have references to trigger my memory later. But when the thing to remember is an image words often don’t exactly fit the situation, and if the image is in my head, a camera won’t work. And then I remembered drawing. For which I have no talent (spoiler). And also I remembered a friend who had recently shown me how watercolor pencils work. Basically you draw, you wet, you drag. I had never tried, but it looked glorious. I rode home from the massage via an art supply store and bought some lápices acuarelables, and quickly got home and started sketching and painting. What I drew was childlike, really bad. I also didn’t quite understand how to use the pencils and water. But it held. I took a thing from inside my brain and put in on paper to remember, and didn’t use any words. It was strangely marvelous.

Given my recent weird block with the creativity which I mentioned here, I’ve kind of missed being expressive. This thing with the pencils, (and later watercolors) opened up a part of my brain I’d never really thought about before. I bought some more paper, dedicated some jars. Opened a paper supermarket bag to use as a blotter. And I set to painting. 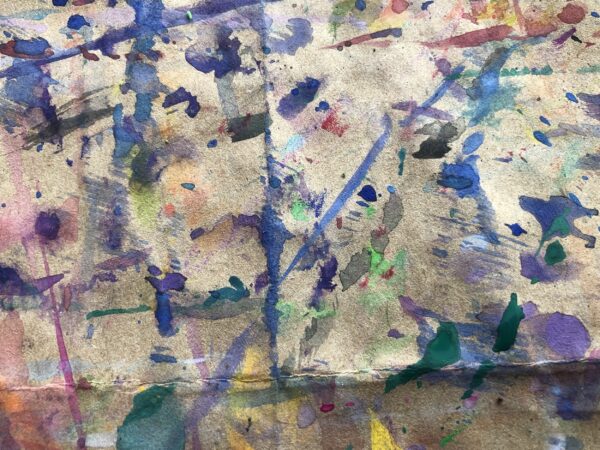 This is not a painting, it is the grocery bag. Though really it is probably not worse than some of the paintings.

Playing with the colors was relaxing, strange, hypnotic, magnetic. I have not picked up a paintbrush since I was 8 years old, having newly skipped a grade to end up in Mrs. Marks 3rd grade classroom where about once a month you could sit out of all of the classwork and paint tempera paints while wearing an adult’s button down shirt backwards as a smock.

In the last few weeks, I paint and paint and paint. Mostly in the morning, sometimes right before it gets dark. Always in natural light. A little bit facing the Río Toltén on a recent trip to the south of Chile. A lot of the time things that mean nothing, and sometimes things that look like things my brain has woven out of daytime experiences, synesthesia and whatever else makes these colors and patterns flow.

I showed some of the earlier paintings to the watercolor pencil friend, and she was particularly taken by the ones I told her were based on these things I had seen inside my head. It doesn’t matter if anyone is taken by them, largely they are garbage, just doodles, but I wanted her to see what she’d inspired. I also started painting the skyline from my old apartment, which I miss, even though everything about my current apartment (except that view) is much better. I have painted it four times and I might paint it a hundred more. I don’t know why, it’s just an itch that’s in there, and it feels some how like if I get it right, I’ll be cured.

I have several friends who are quite talented, they paint things that are beautiful, realistic, artistic. I am not one of these people, and for now, I’m not going to be showing off what’s going on in the house of a million paintings (I just counted, there are more than 60). But I am sharing this one above which is the very representation of that fever dream, that visualization of the inside of my Pfizer fever, of wrapping myself in blankets and being ensconced in that spooled and unspooled skein of light.

Even as my paintings are terrible, I am fascinated at this new facet, this fixation with color (or black and white), this saying of things without words (though now I’m ruining it by adding words), and the ability to “write down” these things I see in my head. Some say that these visions might be synesthesia, but since I can get to them through meditation, in which there is almost no physical sensation, I went down a different path to look for a name. The closest description I have for this kind of visualizations is hypnagogic hallucinations, which assumes that they occur somewhere between wakefulness and REM sleep. Since I’m kind of always just a few seconds from falling asleep (I fall asleep very easily for reasons unknown), this might be more correct?  So now I have two possible explanations or at least descriptions for what I’m seeing, but for now I still can’t explain my newfound attraction to painting badly.