Availability of goods in Chile re: workarounds, or yes, I really did make pomegranate molasses

At the risk of pulling rank, I will not entertain you with tales of times of yore, or as we like to call them antaño, from when you couldn’t get cheddar cheese in Chile to save your life, tortilla chips were something special, and you had to eat local junk food like Tu y Yo or Super 8 or some Tritón cookies (which always sounds like trembling to me, but that’s tiritón). I won’t do that, because we get Waitrose (no idea what that even is), and Lider was bought by the store that sounds like All Cart now carries American ice cream, which I don’t buy because my freezer kind of stinks, and also, I don’t really need ice cream most of the time.

While I won’t regale you with that, I will regale you of the searchy searchy tale of gringos looking for their foodstuffs. When they are raw ingredients, I kind of get it. It is pesky that most of the brown sugar we get here is slightly coarser than what we get at home, and is also dry. But mix a drop of honey or molasses (or reasonable equivalent, of which I’ve found two, Peruvian algarrobina, or Chilean arrope de chañar), and you’d be hard-pressed to know the difference. There are other things that people want that you legitimately can’t get, and either there are no substitutes for, or I don’t know what they might be. Fresh fenugreek leaves, for example. Or anything not super popular out of season.

But what baffles me is when people are looking for things that either there is a good substitution for, or something that you can easily make at home. Chocolate chips! My god, what the hell with the chocolate chips? They are not even good chocolate. Buy a chocolate bar and cut it into pieces, and call them chocolate chunk cookies (though then add more flour and maybe more leavening, because the butter here clearly has more water in it than what we get at home). I specifically recommend a brand called Karina, German, which, for reasons unknown to me, lives at the supermarket in the gringo and freakish food products (see: Nutella, sometimes pretzels), and not with the chocolate. 2.5 bars is plenty, mix and match dark and milk as you like.

And then there are other easily-made things, and things you can make better home-made. They want flavored cream cheese (en serio?) steel cut oats (just whir whole oats in the coffee grinder), biscuit mix, ranch dressing (now available), graham crackers for smore’s or crumb crusts, packaged dinners with chicken cordon bleu, I don’t know, they want all kinds of things. And it’s fine to want.

But much as I never applied for the job, it has come to my attention that I am the bailiwick of things that one cannot get here, but can easily make. Two weeks ago it was ricotta, before that, paneer. Which is my way of announcing that though I’d never even tried commercial pomegranate molasses, I decided I had to have some. A friend suggested I could order some over the internet. But why involve fruit going from the farm to the deseeding plant, to the cooking place, to the bottling plant, to the United States, to the warehouse, to the transportation, bus, plane, boat or whatever), finally ending here with my postman bringing it to my building on bike. (If it ever got here, there is a long story about items being lost in space and me having to go to the post office office to get them for failure to have left a tip in the past). But digress. I also figured I could probably just make some, with a bit of elbow grease (de-seeding), and reducing, how long could it take?

Here’s what that looked like. First you must go to the feria. I went to the Vega, whereupon I bought about 4 kilos (8 massive fruits, 700 per kilo) of pomegranates from some vendors who were not Chilean. This happens more and more lately, and together with my Venezuelan friend, we decided that we think they are Dominican. The people, not the fruit. Anyway, so, eight monsters, like this: 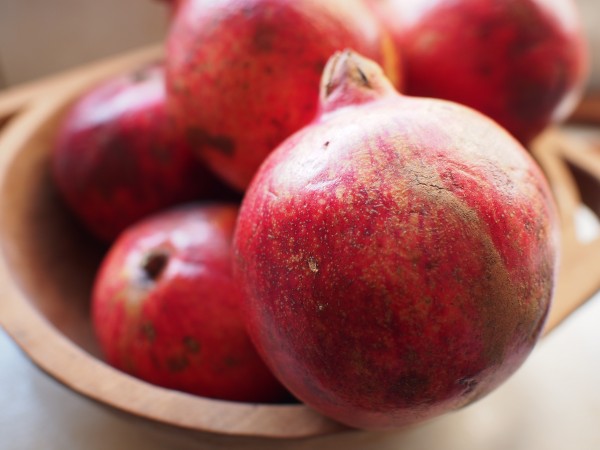 But how to get at the delicious seeds? First you must cut off a hat. You might make the hat larger if you hit a whole bunch of pith like I did. Cut it on an angle, like you’re carving a jack-o-lantern, and you want the hat to sit on top when you are done, not fall through. 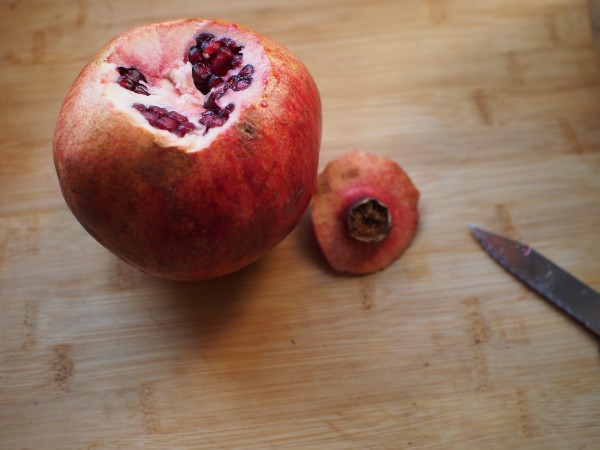 Then score down the skin, straight down along the outsides, and pull it apart. 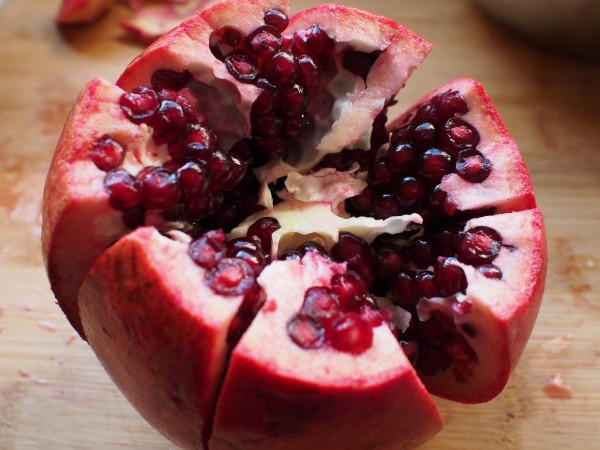 Dislodge the seeds, and eventually you will end up with a bowl about this big full of seeds and some pith. Fill the bowl with water, and scoop out the pith, which floats. 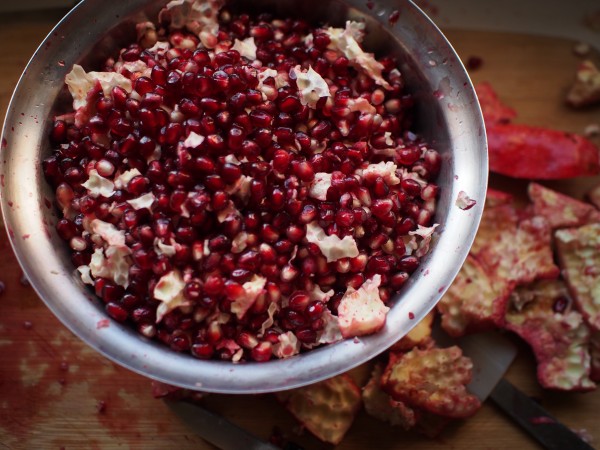 Seeds into blender (I did this by about 2 cup measures). Don’t whir too much, they say! You will get cloudy juice they say! I don’t know, I blended until they seemed blended, but the seed interiors were still intact. Then I strained them. I got about 8.5 cups of juice, or about a cup of juice out of each fruit. Which I set to boiling, together with a tiny bit of lemon juice and some sugar, as instructed in this fine recipe by Alton Brown, who I trust with such things. 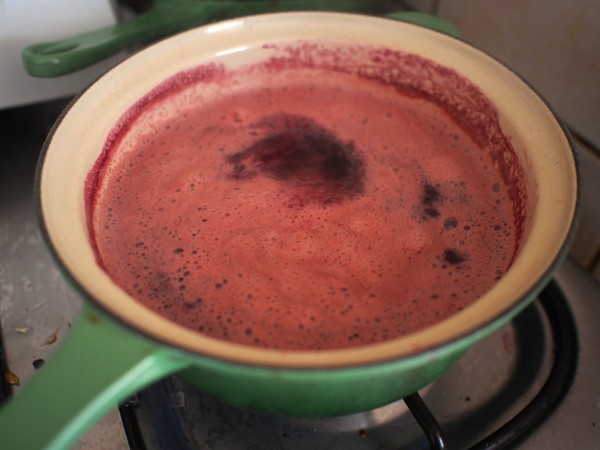 There was a whole lot of boiling. About 75 minutes worth, during which time I also made coconut dulce de leche out of coconut milk, because while you’re boiling one thing, you may as well boil another. 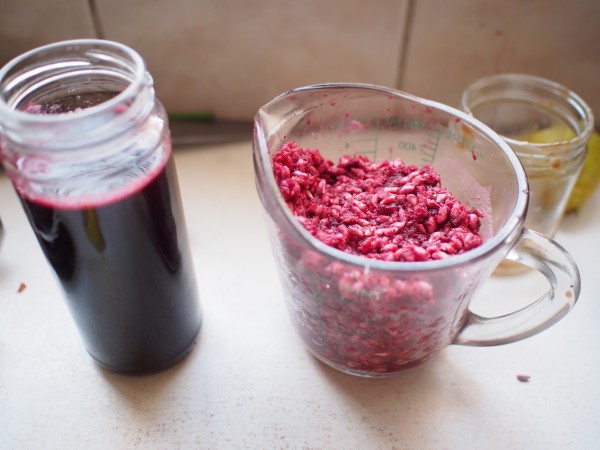 The result is not a lot of pomegranate molasses, about 1.5 cups. The seeds I ate a couple of, but robbed of their juicy exteriors, it seemed like I was eating animal fodder, so I stopped. I have no idea what I need this molasses for. They say Yotam Ottolenghi will want me to use some in some of his dishes (I have a couple of his cookbooks), but yesterday I put it over “greek yogurt” (regular plain yogurt that I strained myself, because actual strained (as opposed to thickened) yogurt costs $7.50 (and no that is not a typo) for 500 ml, and they only sell it at Jumbo, and only sometimes (that’s about 2x what you pay in the states, fwiw). It was incredible, tangy, umami-filled. I don’t know if it was order-it-from-the-US wonderful, and it was way more expensive to make it than buying it would be if I were in a place where it was sold, the internet tells me. But I am not in a place where it is sold, and so like many things, if I want them badly enough, and they take more time than finesse or materials I don’t have, I will make them. If I wanted chocolate chips badly enough (and they ARE available, just not always, or the brands people crave), I might melt down the chocolate and pipe them out on a baking sheet. But you know, chunks. And mixing and making things yourself. I swear this is something I do not understand.

Disclaimer: working parenty folks with kids and house and job and no help and all, I get why you don’t want to make everything from scratch, but I still think there’s always room for a bit of innovation (or traditionalism), plus making new traditions.

Caveat (different from disclaimer): when you want something that doesn’t actually taste like food, like Doritos, I totally get why you want them, and I might even ask you for one. Or seven. To accompany my diet coke, which is poison. That’s why I need the pomegranate molasses. Antioxidants, don’tcha know.

I have already put together a list of tostadurias (dry goods shops) where you can get many a peculiar ingredient. One day I will make a list of other types of shops that sell theoretically hard-to-find items.