The thing you can’t find in a guidebook. That thing is you. 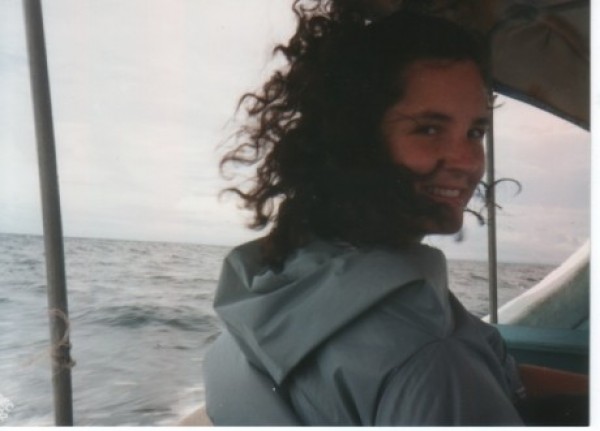 At the risk of waxing too personal (but not that kind of waxing), I want to tell you about the person you see in this picture.

She is terrified. She is uninformed, ill-prepared, and, not speaking the language, practically mute. And in this picture, she is taking a boat from the town of Livingston, Guatemala through the Bahía de Amatique, to Punta Gorda, Belize in November of 1992. It’s a small boat, and there are five of them, the captain, a friend of his, a guy going with his and his wife’s passports to get them stamped, the woman you see in the picture, and a friend of hers who she traveled with for several weeks. And later in the journey, out of view of land, the waves are sometimes taller than the boat, and they pull across the troughs of grey water, she thinks, “does anyone even know we’re out here?”

She was my first travel-Eileen incarnation, the first time she ever said, “there’s something more, and I want to see it.” She was 21, and she bought a ticket (for $199, and that’s not a typo) round trip from JFK to Mexico City. In between these flights, there were six months of–judging by her journal–absolute blather, self-doubt, boy-craziness, and intestinal woe. There were also moments of who-gives-a-shit, and I-can-do-this, in between the wonder about where to sleep next, and, on one occasion, lamenting having managed to take a bus six hours to the wrong place by transposing a syllable in one of the indigenous Honduran place names.

She went to Central America because an ex had gone on archeological dig in Honduras. Because Central America was there. Because it was close, and cheaper than the summer-in-Europe trips a few of her wealthier friends’ parents financed for them between college and the rest of life. She would pay her own way, and Central America seemed it would be more interesting, more unexpected, more audacious. Certainly she would not be writing about a picture of herself in front of the Louvre. She did not know she would ever blog.

And so she got a bunch of vaccinations, and pored over boots and insect repellent and backpacks in a bricks-and-mortar store, and read this guidebook you see here on the train to her mother’s house, and men on the platform would ask what she was reading, and when she told them, they would scoff, and she would hold her ground, and say, “you’ve never been, so what do you know?” and they’d tell her horror stories made up of late-night movies and free association, and even her boss at the software company would tell her she was going to get “jungle foot rot.” 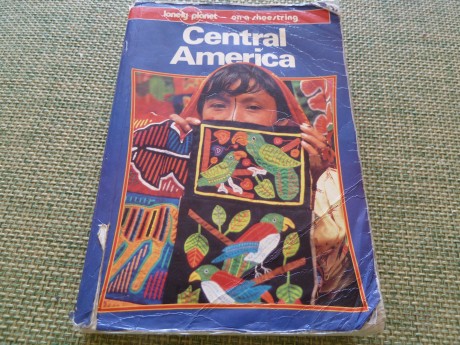 And then, despite all of this, she would take off, because it seemed like the right idea at the time.

And six months later, full of the pomp and hubris that only a 22-year-old “world traveler” could have, she returned, thin beyond her wildest imagination, the product of illness and subsequent fear of food and, at times, feeling crushingly alone. And she returned to a life unchanged, people who had about 20 minutes of tolerance for stories about Central America, and men too old to look at her commenting on her tanned, muscular legs on the subway, and the strange sadness that comes with having said goodbye to a place forever and marching forward.

I know I will not find this place again. There have been twenty years of change, and (I understand), there are now many multi-storied buildings in Managua, which, minus one hotel and the Sandino outline, were absent when I was there. Every place will have morphed, though I have written down (and photocopied) information about where I went, and might revisit some of them. I hold a hope that I might glimpse an angle, get a whiff of a smell I haven’t smelled in 20 years, and figure out the parts of the story that I didn’t write in the journal, because in 1992, I was (I tell myself now), age appropriately, self-obsessed.

But in actual fact, I know I will not find these places, because not only have the places changed, but my vision has changed. In Spanish we talk about the prism through which you see the world, as opposed to the lens. I like this image, because though lenses can change your focus, prisms break up the stream of light and turn them into something else. They take a whole, and strain it into pieces that help you see the parts that comprise it.

I know I won’t find the place I once was. But I can’t help hoping that one of those pieces is that incarnation that you see above. And that I just might meet her.