I’ve had a weird couple of weeks, way more out than in, in the sense of being out of Santiago. First I cycled around Lago Llanquihue, which was spectacular in every way, except for the part where I took a spill that bruised a bone which left me very limpy, but still able to bike, thank goodness. Then I went to a wedding in Villarrica of two friends who are ridiculously well suited to be married to each other, and who I couldn’t be happier for. Then I flew home from there and immediately (literally 17 hours on the ground) turned around and flew to what I like to call the “ass end” of Chile. Farrrrr south, and wayyyyy off the grid. This was for work, and there will be more details, but I have a few other things to say first. One, it is possible to travel far and wide and even on a bike, car, boat, etc. with limited food choices. Cooler temps are easier than summer because you can bring semi-perishable “fresh” foods like carrot sticks and gluten free bread stand-ins without too much trouble. Another is that I am so ridiculously happy to be home in my apartment, alone, not totally bundled up against rain and Patagonian winds, and also, there is nothing like sleeping in your own bed.

But another huge perk of being back in Santiago is the feria. It’s only been a few weeks since I was there, but I was just so excited to bike over, panniers at the ready for whatever this week’s bounty would be. And it was this. 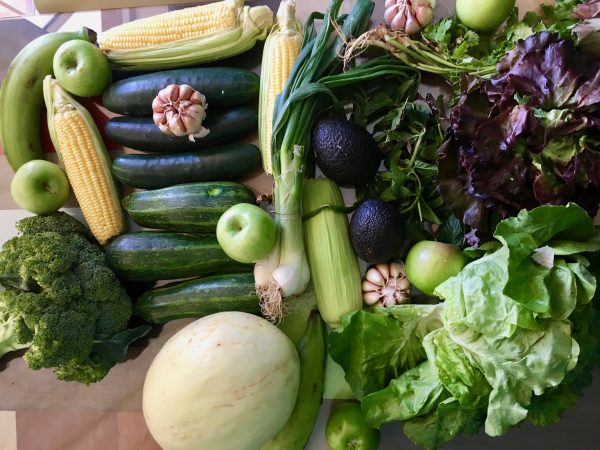 For those of you concerned about the mostly green nature of this haul, worry not, as I have carrots and red cabbage that survived my absence. I have a lot more to say about food and shopping, such as the fact that with the addition of the stomach snafu into my life, I no longer really crave much food, which makes it a more intellectual as opposed to sensorial experience to shop. However, having said that, I ended up buying the spearmint by smell, because I smelled it, and it smelled amazing, so I had to have it. This is what impulse purchases look like on histamine intolerance. I get the feeling that my dopamine situation is turned way down, and that’s why cravings are low, but I will have to do more research before I officially believe my own tentative hypothesis.

In other news, my egg guy has started braiding his semi-mohawk back into kind of a french braid and it is adorable. His mother has been MIA for weeks and I’m pretty worried about her health, but have stopped asking specifics, after the last time he said she was doing very poorly. I just, just send generalized greetings to the whole family when I see him. Ah yes, I also bought eggs, a dozen large brown eggs for 2,000 clp. Last time I cracked one I got a double yolk. Also, children who carry stuffed animals and dolls with them every where they go? Still adorable.

Hope your food shopping is bountiful and bed comfortable, wherever you may roam.