I give you: the beansnake, or the midweek Vega report 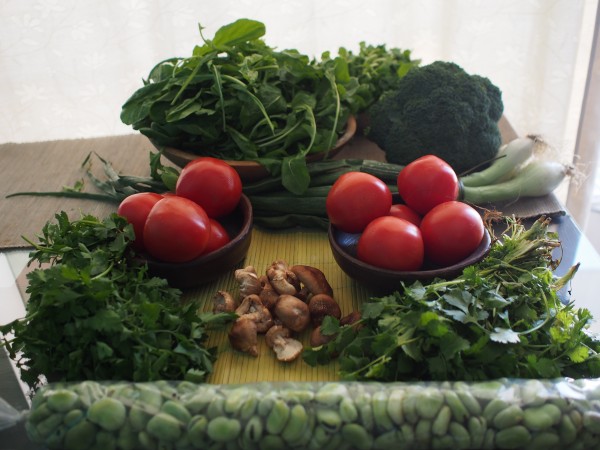 I was on my way home from the doctor today, for the long-fought asthmapalooza extravaganza, and decided to pop into the Vega. Bought a bunch of stuff, as I am wont to do, and rejoiced at the price of overripe tomatoes, because I am constitutionally incapable of staying away from this homemade tomato soup that I love. I also bought a bunch of the usual, because it’s the usual, seen above, with prices below.

But what I really want to talk to you is about the beansnake. There are certain ways certain things come packaged. In Chile, for example, many foreigners have trouble finding tomato paste because the can is like can-of-peaches shaped, not Redbull-shaped. (it’s also called concentrado de tomates, not pasta de tomates, but I digress). We are used to seeing certain foods in certain formats. And there is a very specific way that habas, or fava beans are sold in Chile. In a bag, a little taller than it is wide, tied at the top. Peas are sold the very same way.

How they are not sold is in a long snake. As they were today. In fact, I didn’t even really want habas (except actually I do, because they are so delicious and proteiny), but could not resist their allure in this ridiculously snakey, draft-catching format. I posed with them as a stole, or necklace for a bit, before putting them in my bag, imagining that someone had bought the wrong shaped bags, and then thought to himself “qué tanto?” (what’s the big deal). And I wonder what else they could have made me buy if only they’d packaged it strangely. Alas, everything else was standard, except for the fact that I was at the Vega on a Tuesday. And the seldom-seen shitakes (see below) were sold loose.

Not pictured, tip given to the boys laying down airflares and freezes like it was 1982 at at Roll-a-Palace. Breakdancing reference. Also a Brooklyn reference.