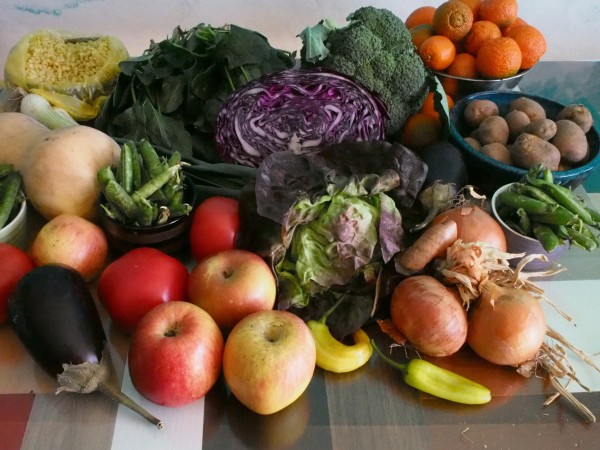 There is so much more to this feria report than vegetables. Like the fact that this is the first time I’ve ridden to the feria on Martinez de Rozas (about a mile from my house) in more than two months. I have been going to the Vega, because it’s easier to get there by metro, and I got sidelined by a bruised (not broken) scaphoid bone, one of the 8 bones that comprise the wrist. Most common way this thing is injured? Extended arm fall, often from a bike. Mine? Yeah, that. Pedestrians in the bike lane, much to my slammed to the ground disgruntlement.

And the fact that there is something wrong with my wall, as you can see by the white plaster over the pretty teal colored paint. There is a long story about cultural differences in plumbing and being neighborly, but that will have to wait. In the meantime, I have been inconvenienced, and they took my kitchen apart for way too long, and there was vile greasy water spilling into my kitchen from upstairs, and it occurs to me that every kitchen should have a tiny dam at the threshold, to keep the water inside the kitchen. Just saying.

But things are mostly back to normal and me dieron de alta (was freed from medical care) yesterday on the wrist, and so bike I did (though tentatively) down to the market. I did not buy any avocados, as the drought priced veggies are hard to stomach, and I didn’t really need avocado anyway. Though here is a very funny photo from a recent trip to the Vega. The sign means roughly, for the untamed classist snob, and ‘why you so angry?’ (sic). This is because everyone is all OMG over the price of the paltas haas, which are somewhere between 1.5 and 2.5 times as expensive as this time in previous years, and these people purchasing at the market often take it out on the people at the feria, whose fault it is not, they are just passing on the drought-inflated prices. 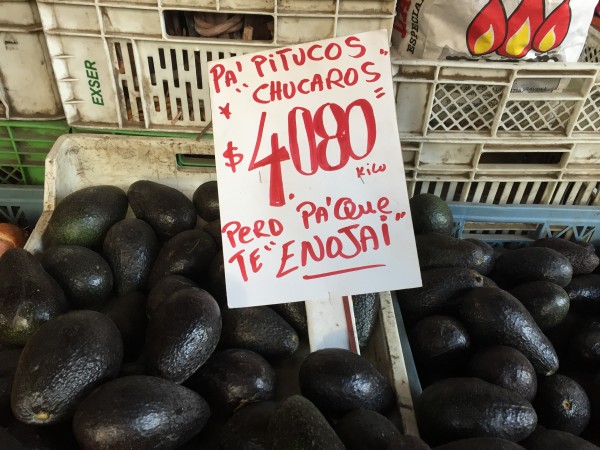 The mote is a cooked grain (wheat) that I bought as convenience food. It is normally eaten in a very sweet dessert/drink that I have talked about before, called mote con huesillo, but I also like it as sort of a pilaf, with fresh peas and scallions, which I am eating right now, as I type this. Convenience because I have it dry in my house, but it takes a while to cook, and I have plans in the immediate future, so this was easier. I assume that most people at home put it into mote con huesillo and don’t cook it again, but I actually have no idea. See what you learned? 1. I did not break my wrist 2. Plumbing problems abound 3. class issues are alive and well and affect avocado signs 4. I do things other than take pictures of fruits and vegetables.

So here’s the feria report: The dollar is at 635 CLP these days.