Hiking in a dreamed-of place on the Azores

Always. That’s how long I’ve wanted to go to the Azores for. Well, for as long as I can remember. What brought you here is a common enough question whenever you go someplace slightly off the beaten path, but go to the Azores if you never get tired of that question. Also, be warned that if you speak even a smattering of Portuguese, everyone will think that you are either a) of Portuguese ancestry (if you, as apparently I do, look vaguely Portuguese), or are Spanish or Italian because, as one waitress explained to me, “Portuguese is hard, and they’re the only ones who bother to try.”

And try I did.

I tried many things in the Azores, including this hike, which is called Serreta-Lagoinha, in that it goes from Serreta to Lagoinha. It’s on the island of Terceira, and though it claims to be a loop, I failed to find the second half of the hike, and ended up walking back the much longer way on secondary roads, ever thankful for the presence of the enormous blue ocean to indicate the direction in which I should be heading.

I chose this hike for a couple of reasons, one of them being that I could actually get (closeish) to the starting point by bus. Public transportation in the Azores is almost completely limited to Sao Miguel and Terceira, as in they are the only places that have buses throughout the day, and not just in the morning and evening to get people to and from school and work. Even so, careful planning is necessary, and you should know that when a hike is rumored to take 2.5 hours, especially when you take the longcut down, and also have to walk 20 minutes to get to the actual start, you will miss the bus you were planning on taking, but if you are lucky, you will take the next bus to an intermediary town, where you will have a tour of a wine museum, but, having not really eaten any lunch (more bad planning), you will not drink any of their wine. Later you will end up on the same bus back to Praia Vitoria, with the sneaker-wearing Russians you saw earlier, who you had hoped would go on the same hike with you, so someone would know if you fell and died, which you did not, though you are beginning to have the sneaking suspicion that in the bike crash you had before you left for Portugal, you actually broke a bone in your hand, and that’s enough of an injury to last you for a while, thanks very much.

Oh, but maybe you want to see photos of the day.

In the morning, I had planned to head out to a different town, but saw that there was a bus leaving to Angra, where I’d been the day before in bleak weather, so I went back for a two-hour run around, including here to one of the highest points. Not sad to have done this, though the later realization that I failed to eat lunch did nothing for my energy on the hike. 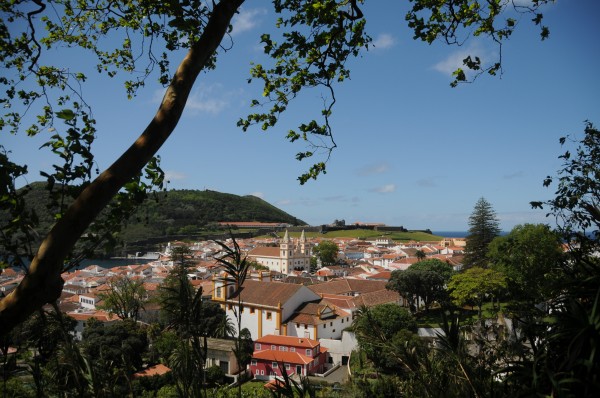 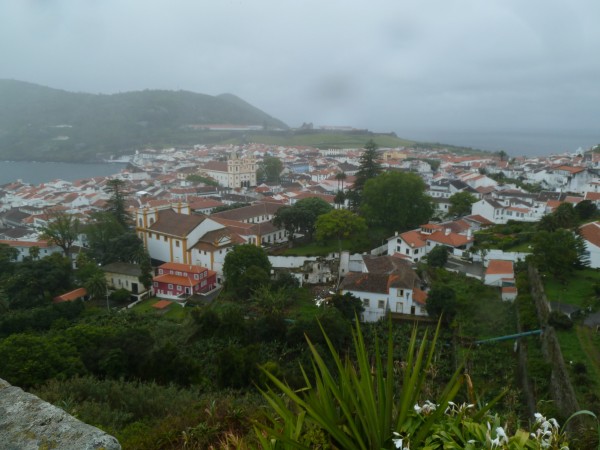 But you want to know about the hike. All of the hikes on the Azores have these placards at the trailheads. You can find out about the trails on the website, or when you go to the various tourism offices at the airport or tourism kiosks. You should know that they will bury you in an ungodly amount of pamphlets and handouts, one for each hike. Probably better to peruse the website and decide where you want to go, and take the pamphlet for those only, though the tourism offices tend to be great, with a shout out to Jennifer at the Ribeira Grande tourism office on Sao Miguel, and Rui at the Terceira airport one. But back to the hike. There was a sign. 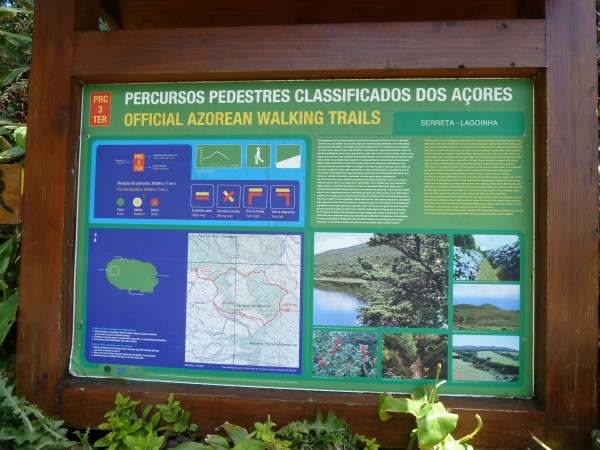 There was foxglove (I think). 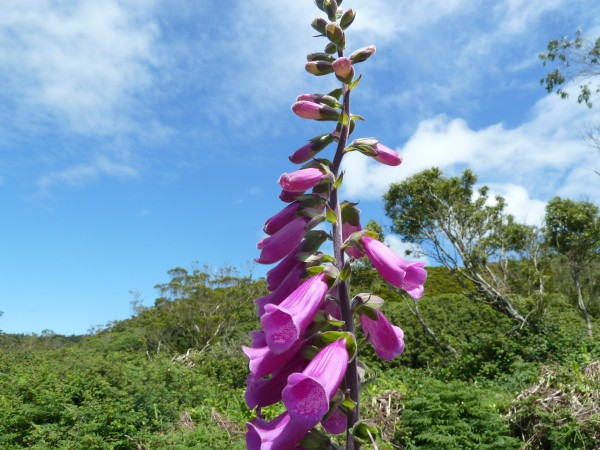 and basalt chips, because all nine of the Azores are volcanic. 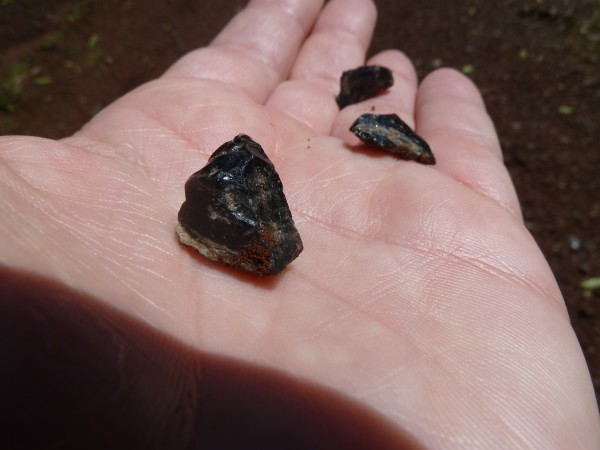 and mossy, fairy forests everywhere. These are tiny, smaller than the first two joints of your pinky. 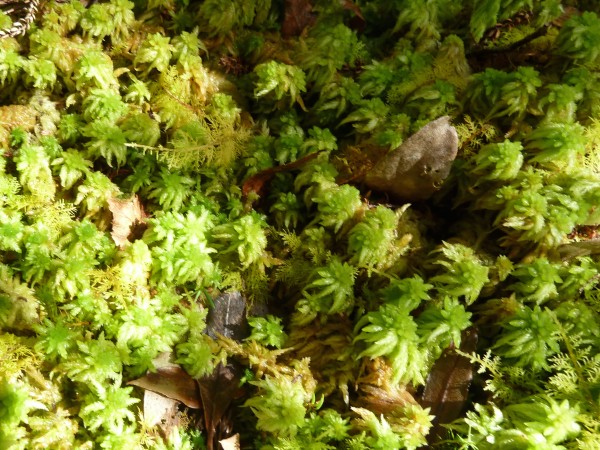 And then bigger versions you can walk through. But nary a fairy! 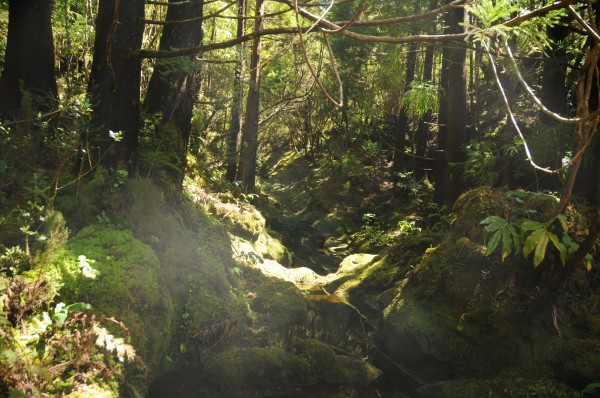 And tall Japanese cedar forests, to which I said (to no one, as on the whole hike, the only evidence I saw of anyone else was a single not-mine boot print): “You are kidding me how beautiful this is.” 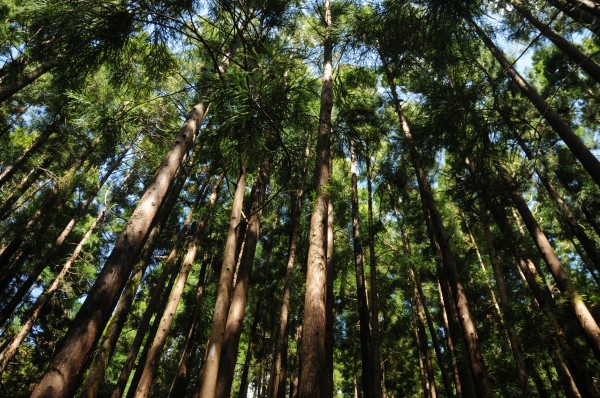 And then this which also made me say “you are kidding me,” but in a totally different way, as this creek is the actual trail. If it looks vertical, that’s because it is. the total width between vegetation is max about three feet. 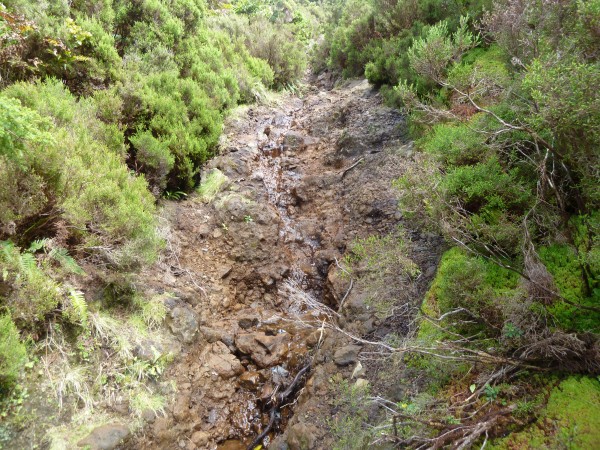 And I don’t even know how they decide what to tell you to look at in the Azores, because everything is so damn gorgeous all the time, like this view from the top (though the goal was actually a lagoon, which on ocean-heavy Terceira is probably very exciting because it’s fresh water and attracts birds, but look at this view facing the opposite way.

Here, by the way, is where I turned around, and hiked back down the creek, probable broken hand be darned, supporting myself on the hand=ouch, and out to the turn off I’d taken to get up to the lagoon. I tried to follow the instructions on one of my many pamphlets and the yellow and red equal sign trail markings that mean “keep going straight”, but quickly realized I was not on the trail. But then I was on this road, with the giant ocean unfolded before me, and I knew eventually I’d hit civilization, and more importantly, a bus shelter, where someone would pick me up and deposit me somewhere else. 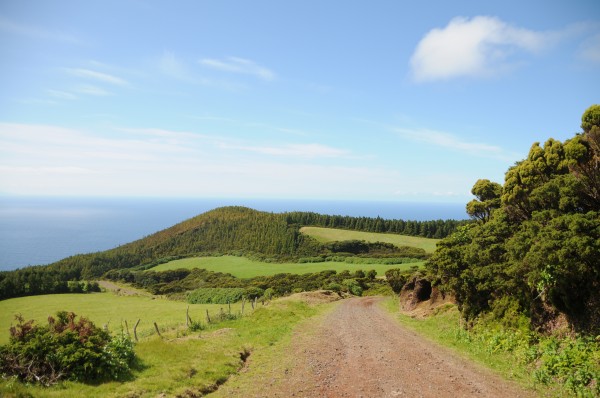 It should be noted, that many times while on this hike, particularly on the way up, I thought to myself, “why am I here?” and “I do not like hiking” and “what was I thinking?” as well as “two and a half hours my ass, and this, after much time running and such at the gym.” But I also saw many things that made me breathe deeply, as though I could inhale them, as well as see them, to more fully understand them, or remember them better. Particularly the cedars and the fairy forests. I also had a religious-like connection to the tangerines I had brought, never so sweet, never so perfect a food, I thought. And then I remembered, that is what I like about hiking. That childlike appreciation of every. damn. thing. Except the creek.

After a toenail bashing walk back down on a variety of dirt roads, dirt finally turned to gravel, and then asphalt, and I did a little hop skip and jump of glee, thinking to myself, “I have made many decisions on this trip, and they have all turned out just fine.” I tasked myself with thinking this, as I got closer to the main road/coast, because in life I dither too much over choices, “what-if” myself out of being decisive, and that is a waste of time. And then I thought, “no, that is what hiking is good for, to listen to the spontaneity-driven thoughts inside, the ones that said, ‘take a different bus,’ and ‘grab some tangerines’ and ‘this is the hike for you’ and ‘there is the bus shelter, and the bus comes in 20 minutes, and that is plenty of time for a private dance party in the shelter to Niki Minaj’s Starship, mindful to ‘hands up and touch the sky’ when the time was right.” Smart voice that one.

From the bus, shelter, mid-dance, I waved to the original bus driver who had dropped me off, as he drove by in the opposite direction, and when it came, flagged down the bus I was waiting for to the end of the line, to wait for the next bus back to Praia, at which point I bought the best thick-cut potato chips of my life, and ate them with dirty hands on the curb, and it was the best curb I had ever sat on. Then the Russian couple arrived, shoes still clean, as they had not been hiking in ankle-deep mud with me throughout the day but rather had sensibly spent the day in a town called “biscuits” (Biscoitos, so named for lava formation, not actual biscuits/cookies), enjoying the view. And together we got on the last bus, the one that left at 7 PM from Biscoitos, to take us to Praia, though we may have arrived a bit late, as there was some traffic on the way. 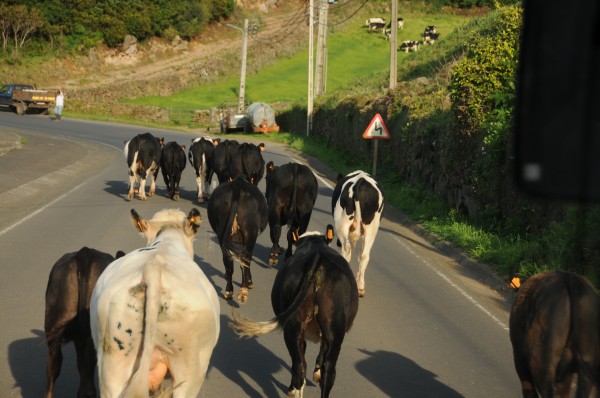 And that is what happens on one of just fifteen days, when I go someplace I’ve wanted to go to for as long as I can remember, and then remembered to breathe deeply and appreciate the gorgeousness of where I was, and the gorgeousness of being able to appreciate all the sweet and salty, shiny and mossy things. And the sound of cowbells.