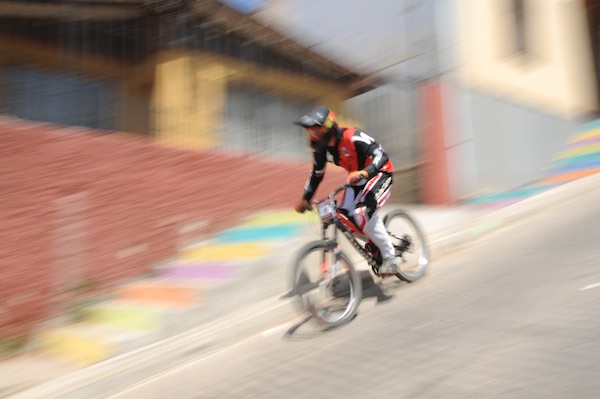 Before even leaving for Valparaíso this past Sunday to take pics at this thoroughly, completely insane downhill race, I did a little research. Okay, research might be putting it strongly. I read the press communique. Which in Spanish is called a comunicado de prensa. Press release? Something like that.

I found out who the major players were (from my point of view), and decided that I would be an informed photographer. So when I ran into Sik Mik on the cerro, just doing a recce (say: recky, I can say that because he’s Australian and that’s what they say), I chatted him up a bit and then let him go when I realized I wasn’t the only person who knew who he was, and was going to be in every single picture of him. Caught up with him later again though, pleasant as always. 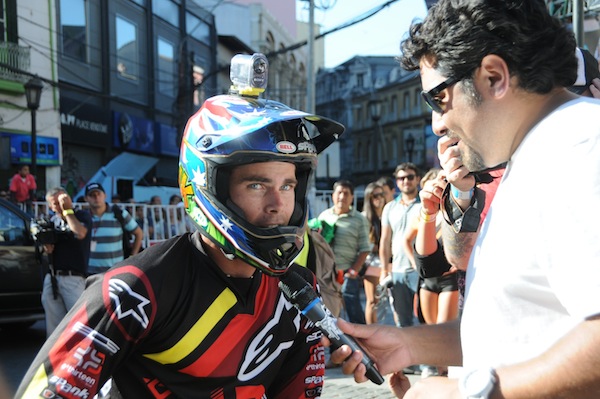 The way the race works is that they open the course for a couple of hours, during which time people walk it, bike it as many times as they can/like, and then there’s a qualifying heat. 50 people were alleged to start the day, 16 made it into the qualifying heat, including Sik Mik with the best time of 2:32, which was still two seconds off last year’s time that Colombian Marcelo Gutierrez made. In between all this madness of naming attractive 20- or 30-somethings I don’t know, I should also mention Filip Polc, the Slovak who had won a few years ago, and Maurico Acuña, the hometown favorite, who won in 2012.

In actual fact, the race course was severely delayed in opening. Like by hours. Why? Rumor has it it was the “Canon Jump” (which is what they called it at the Canon booth, but I think we can all agree it was the Plaza Bismarck jump, loaner lenses be darned, I shoot Nikon). A problem with this jump (or the recibida, which is what you call the ramp landing, handy that) is not necessarily something that should have surprised me. Why? Because they were still painting it when I arrived some 2.5 hours after the black press credential tent was supposed to go up. Which, by the way, was white. They tried to placate me with a Red Bull, which was the sponsor of the event. Blueberry? Not bad. Probably saved me from falling on my face starving because there was no time for lunch. But back to the ramp: 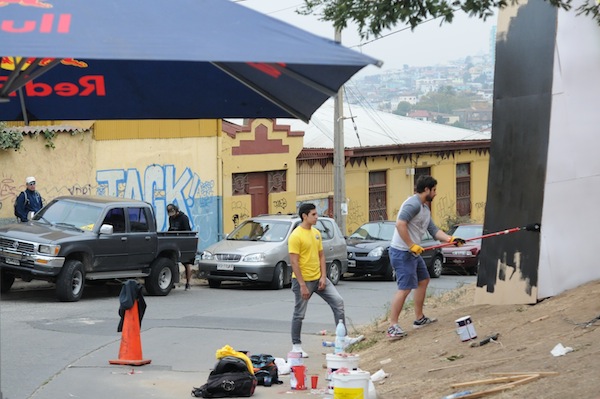 And they were still putting together the press pits, too. 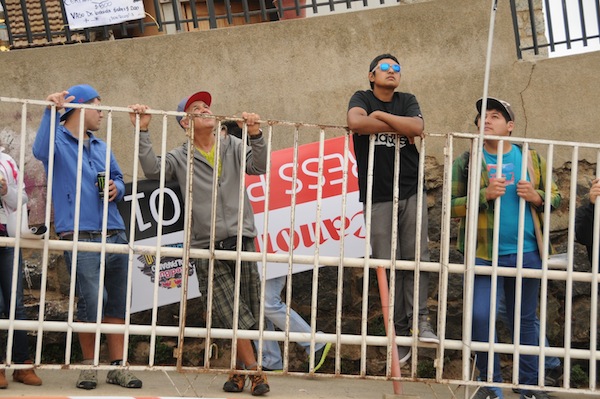 Competitors were were hoofing it up after walking parts of the course. 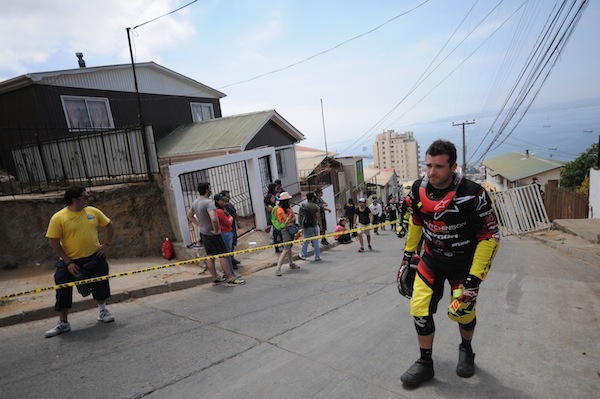 And then, when the course finally opened, riding down, tons of air sometimes optional. 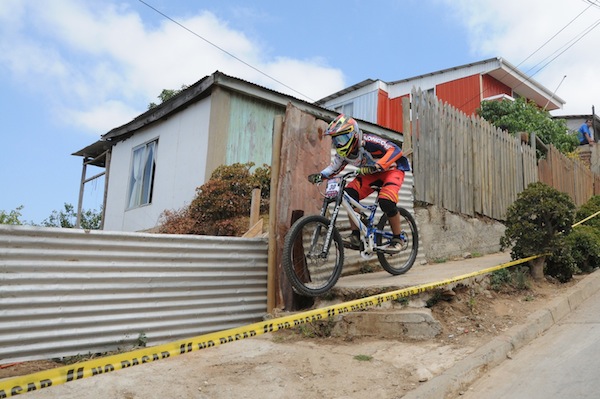 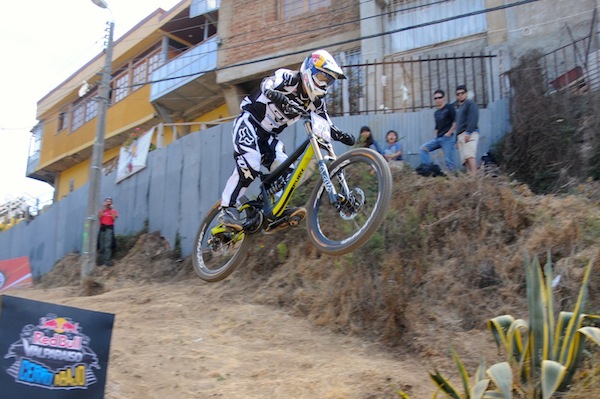 Sometimes stacked up one after the other. 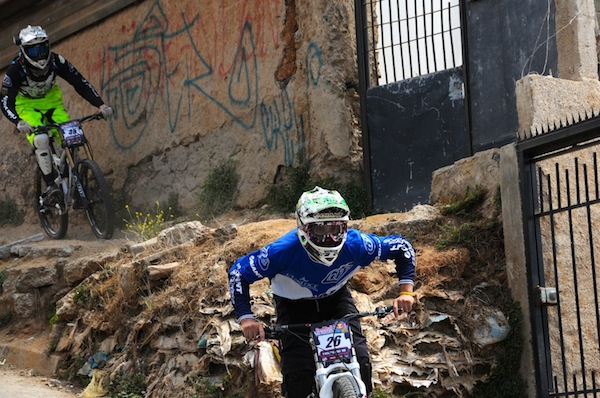 Sometimes surprising (this was a new obstacle). 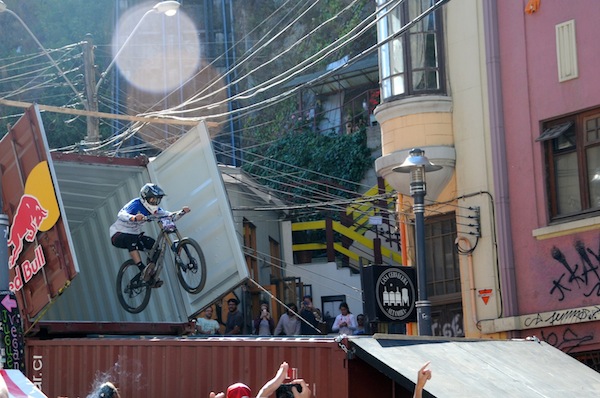 And sometimes just like years’ past (both the dog and this final jump have appeared in previous years). 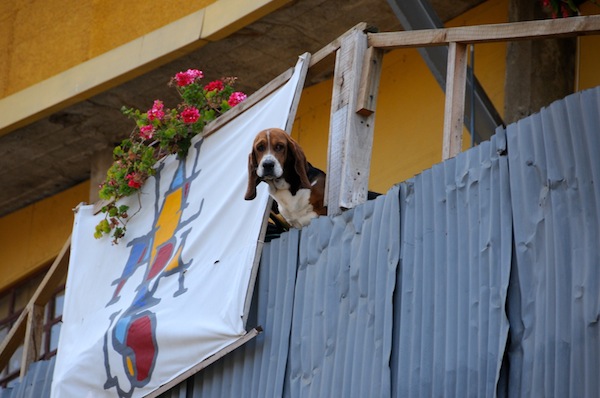 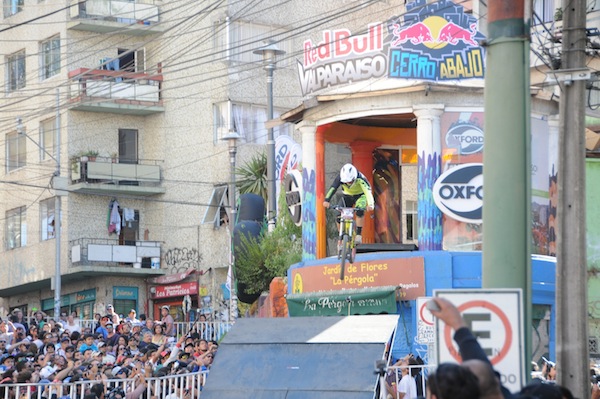 And then sometimes someone who knows he’s not going to win the final comes riding down in a suit. Which was most unexpected. And surprisingly resilient. Nice move, by hometown favorite Mauricio Acuña. Maybe next year a fancy suit company can sponsor him.

Polc won again, and he was gracious and smiley and polite, like most of the competitors. 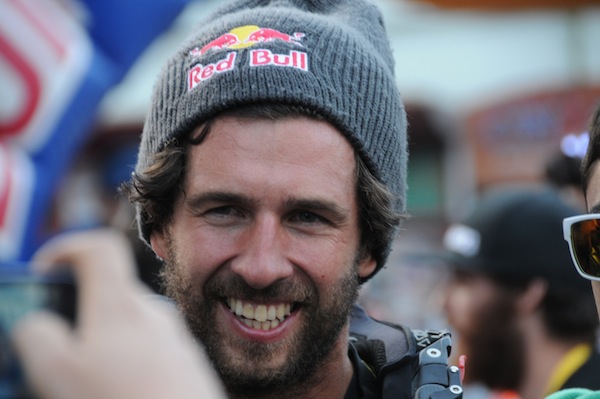 And this is not a sport where you look at it and say, “I could do better than that.” Because you couldn’t. And neither could I. There are, stairs, obstacles, banks, dogs, glass, broken bits of wire, narrow passages, piles of hay and flying dirt, hazardous photographers, etc. Oh, and big air jumps. 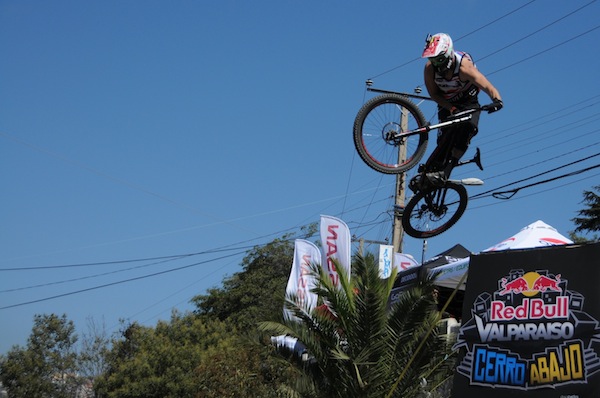 One of my fellow photographers took issue with this hotdogging, (this photo taken from under the Bismarck jump) saying it wouldn’t buy him any time. I’d have given him points for style though. If such a thing were available and I were handing them out.

In the words of Sik Mik (who has broken both pinkies four times, he told me), “this (VCA) is not an event you can practice for. It’s too dangerous.”

But at least you, as a spectator can walk around with your fancy pants camera and know that the worst thing likely to happen is that one of those jerks with the GoPros or similar on long sticks will jam their camera into the middle of every race photo. Grrrr. Did they even get any good shots?

And Valparaíso was, as always, photogenic. 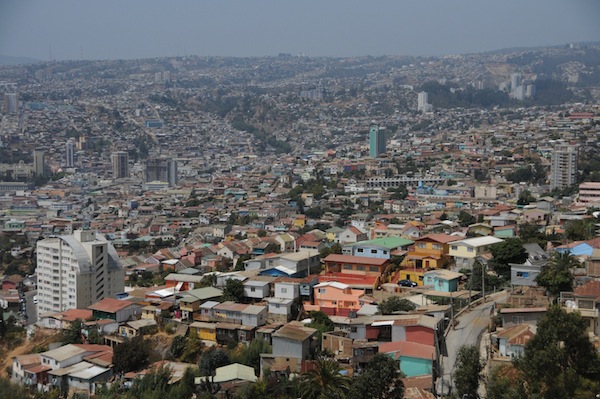 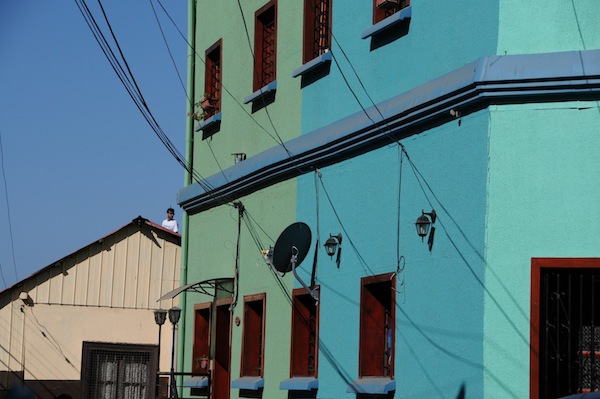 All photos copyright me, no thieving, thanks. Larger versions available on request. More on Flickr.