I am not particularly escrupulosa, and that might not mean what you think 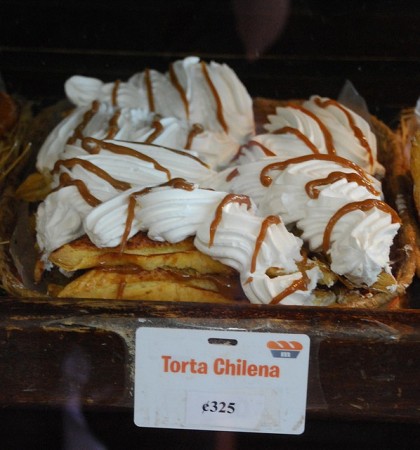 I was sitting at the dining room table of a friend’s beach house a few years ago in Maitencillo, when someone offered me a bite of something they were eating, holding out the fork to me. It was some kind of cake. And since I don’t like Chilean cake, generally speaking, I was going to say no. But to be nice (because this is nice in Chile, although, as we’ve discussed before, nice is relative), I took the fork, took a bit, and ate it.

“Que bien, no eres escrupulosa” (That’s cool, so you’re not escrupulosa) said C, the owner of the house.

And I thought about it. Escrupulosa sounds very close to scrupulous, and if someone said to me, “you’re not scrupulous” (which they wouldn’t, because normally we use the form “unscrupulous,” in which case they’d say, “you’re unscrupulous,” I’d be miffed. Plus what does that have to do with cake?

Unscrupulous means unprincipled. You’ll do anything to get ahead. I don’t think that describes me. I like to think I have standards, and I hope all those sponsored post people who want me to sell space to put up generic content about a city in Nevada with the initials LV that I’ve never even been to would realize that and stop sending me email.

So what about not being escrupulosa? And what does that have to do with “cake” (which I put entre comillas(in quotes) because it was mil hojas which is essentially many layers of thin cardboard spread with manjar (dulce de leche), and if you are particularly unlucky, there is sometimes raspberry jam involved. I say unlucky because caramel and raspberry are two flavors that are fine on their own, but do not ever have to meet in my mouth.

Or on my fork. Which is where “escrupulosa” comes into play.

As it happens, “escrupulosa” means sort of “easily grossed out, especially with regards to food,” or in this case, germs. (Diccionario de la lengua española RAE lists the second definition of ecrupulo as: Aprensión, asco hacia alguna cosa, especialmente alimentos). It can also mean scruples, or a few other things, but the only way I’ve ever heard it used in Chile is in terms of how asquento (easily grossed out) someone is with respect to food. Actually, asquento is probably too strong, in Chile, you might say “me da cosa,” (literally: it gives me thing, where thing is akin to the heebie jeebies. I do love to trot escrupulosa on the many occasions on which I’m expected to share a bombilla (metal straw for drinking mate), or offered a sip of someone’s drink. Just for the vocab cred, you know.

And actually, I am a bit “escrupulosa.” I will not take heroic efforts to not share forks or cups, though it’s not my preference. I figure I’m way more likely to get sick from a child sneezing on me (see: strep throat of 1997) than I am from sharing a fork with a healthy person, so in the name of keeping things relaxed with my friends, I decided to make this cultural leap, unprincipled though it may have been.

Also the image above is of “torta chilena,” which I saw in Nicoya, Costa Rica at a bakery, as I was just getting ready to start my long bike ride, and like “american sauce,” (salsa americana, in Chile a kind of relish sold at the supermarket, it has carrots in it), or the mysteriously-named “macedonia” (finely-chopped fruit salad with orange juice poured over it, this cake looks like nothing we eat in Chile. It is clearly not milhojas, as a) it is covered in meringue and b) it is completely lacking in cardboard.

And then I’m going to link to Vocabat, because if you love Spanish vocab, you’ll love her blog. Plus in the latest post as I’m writing this (Nov 1), she is dressed up as a bee.