On being the Brussels of Latin America (So sorry, Bogotá) 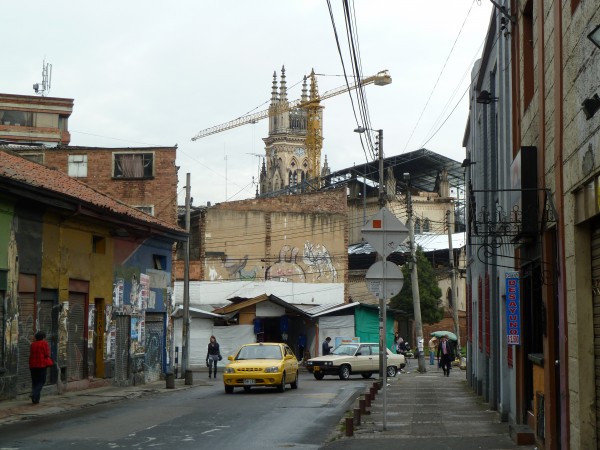 You’d want to be the Paris, the London, the Capetown of somewhere (looking at you, Rio, which some South Africans think of as the Capetown of South America, what with its large hill, and setting on the ocean). But nobody wants to be say, the Tallahassee of somewhere (no offense Tallahassee). If someone told you that a city you’d been to was the Peoria, Illinois of Europe, would it make you go?

What if I told you that to me, Bogotá, Colombia was the Brussels of South America?

Before people get their various undergarments in a knot, I would first like to go down as saying that I generally like most cities, and that I genuinely like both Brussels and Bogotá. But not, maybe, as much as I’d like Paris (if I’d ever been there), or Medellín (which I have, and OMG, you should go).

What’s similar about them? They each have a cool museum. In Bogotá, it’s the Gold Museum (oh my word). In Brussels, it’s the comic book museum, with all kinds of displays featuring Les Schtroumpfs (The Smurfs, who it turns out are Belgian). 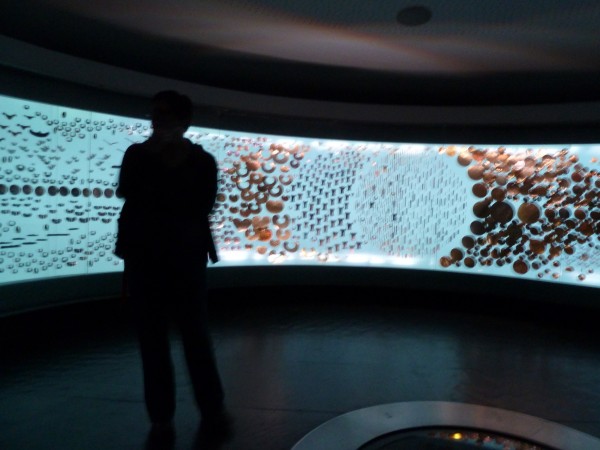 They each have at least one cool mode of transportation, trams in Brussels, the Transmilenio busses in Bogotá that you get on at stations, and with a nifty swipe card.

They have very urban, grungy parts that seem like if you could see them in black and white, you’d be in a film from 50 years ago. Lots of street art, graffiti, broken down things. 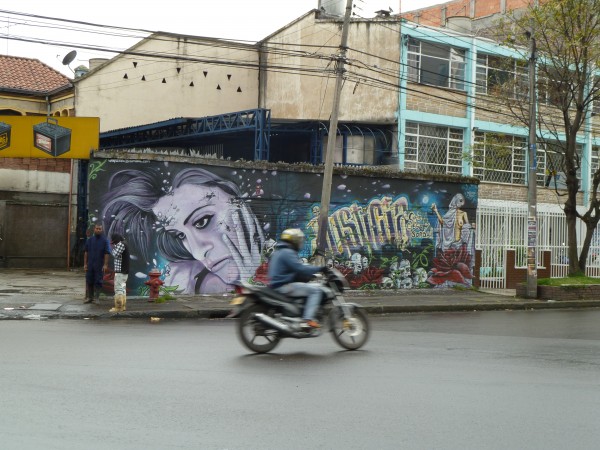 They have good snacks. In Brussels, I ate many a baklava-type-item (which yes, I know is not Belgian), and in Bogotá, I found (thank goodness, and you will see why), amojábanas, which are salty little fluffy sopaipilla-type breads that have cheese in the dough.

They both have one main attraction that is their shining star. In Belgium, I referred to that thing as the “chose atomique” (atomic thing), which is a scale of a molecule (I think) in a park. It was built for a world’s fair, but when you get there, it’s sort of like just seeing it in a picture, except rainier. The supposedly amazing thing in Bogotá is Candelaria, a colonial neighborhood. 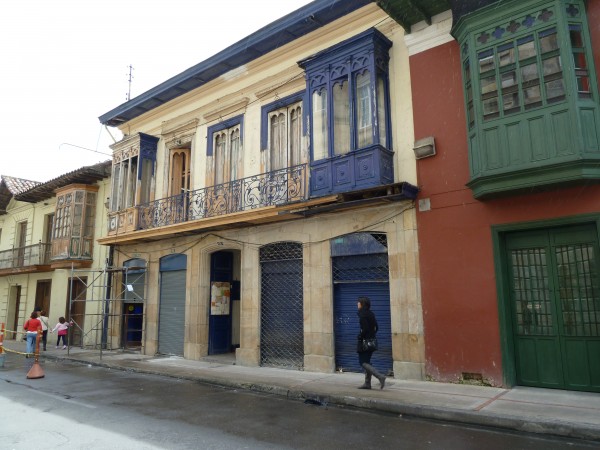 It is true that Candelaria is a colonial neighborhood. It is also true that parts of it are quite (no really, quite) sketchy, much of it is run down, and it is where I had a meal that had a very unfortunate disgusting to taste ratio. It was about one to one, if you must know. There is another colonial neighborhood that is actually in good shape, though it lacks the cathedral with the pigeons and the larger-than-life smurfs and the couple posing for wedding pictures (really). That neighborhood is called Usaquén and it’s touristy, but in the sense that wealthy Colombians go there, not in that everyone has their nose in a guidebook as they trip over cobblestones. And in the interest of full, well-traveled-in-Latin-America disclosure, I am comparing Candelaria to lots of well-preserved colonial towns, from Antigua, Guatemala to Paraty and/or Ouro Preto Brazil, Colonia, Uruguay, Cartagena, Colombia, among others, so I may be holding it to an unfair standard.

It sounds like I’m down on Bogotá, and really, I’m not. It’s a big city, and the distribution is such that you are fairly obligated to take taxis at night, some of which will go past parks and woods that will make you wonder if this is not exactly a taxi to your house, but some kind of shortcut, emphasize on the word cut. But you can also take long, long urban strolls down pretty much any avenue (I chose 7th), and see graffiti and street art and museums and many, many places to make photocopies. I never felt unsafe, never really even felt observed, everyone was pretty much minding their own business, except for one very squeezy ride on the ultrafast bus, with a friend of mine from Russia/London, who used to live in Santiago but was then living in Bogotá. We were speaking English, and one of our fellow squeezed passengers chatted with us, too. To the point where we shook his hand and kissed (on the cheek, me) him goodbye when we left. They close off giant parts of the city for bicycling on Sundays, and people really take advantage of it. 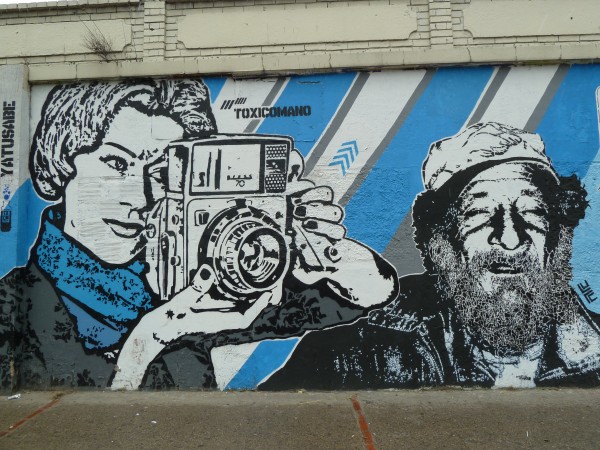 But… it’s got that urban grit, and it was much colder than I expected it to be, and also (and this is important) there are two unrelated terminals at the airport (which was undergoing construction) such that if friend A (me) takes Avianca to Bogotá and friend B (whose name actually begins with an R) takes LAN, despite leaving at the same time from Medellín, they will never, ever see each other in the airport, and no matter how many security guards that they explain their plight to ask them if they can’t just call each other on their cellphones, the answer will still be no, because we do not have Colombian cell phones.

At this point you may have forgotten about the 1:1 disgusting to taste ratio meal. Fear not! I have not! We were instructed to go to La Puerta Falsa, to have some kind of breakfast/teatime treat (chocolate completo). And so we did. We got the works! And the works turned out to be: a buttered wonderbread hotdog roll-type thing, an almojábana (see above, awesome), some other bready items, and the piece de resistance, a cup of scalding hot, watery cocoa, which came with it (or in it, if you like) with a piece of cheese-flavored gum. First we tried the cheese on its own. Oh no, too chewy. Then we tried dipping it first into the scalding, watery hot cocoa. Also not so nice. Then we tried crumbling it up in the cocoa itself, and by crumbling, I mean tearing pieces off, like you might with silly putty, approximately. These pieces sat in the bottom, growing stringy, did not milkify the hot cocoa, and were just the right texture so that when you got one in your mouth as you were drinking your first thought was “spit it out spit it out spit it out.” 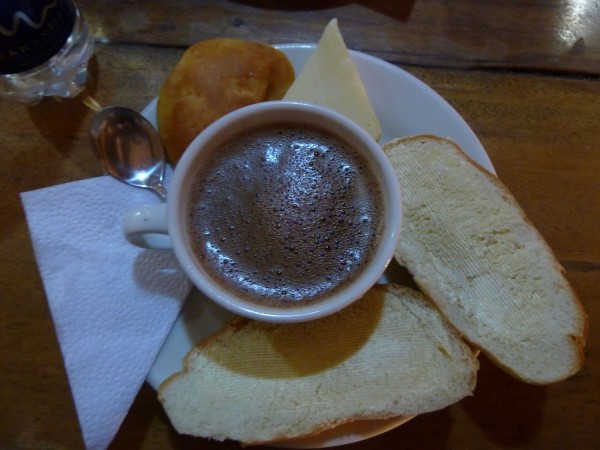 It turns out, there are also tamales to be had. These people seemed happy with their snack, and at no point looked ready to spit it out, so perhaps we chose unwisely (though to be fair, neither of us eats meat). 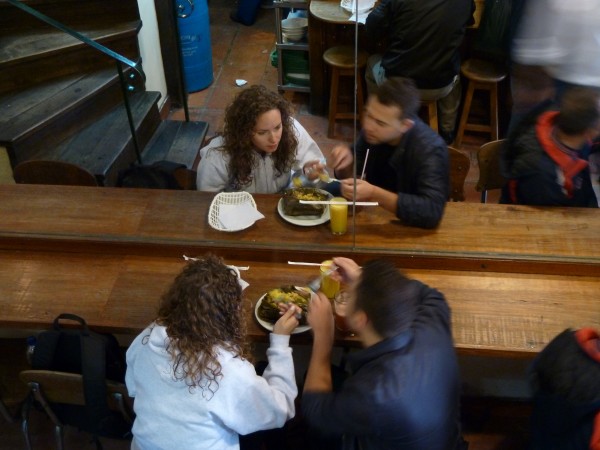 All in all, Bogotá yes, for a day or two, go up the hill, see the city, oooh and ahhh. Eat an almojábana, go to the salt cathedral if you must (must you?), take some pictures (cautiously) in Candelaria, pose with the smurfs if you can find them, and go to La Puerta Falsa fully informed of what the breakfast platter comprises. Also, the correlation I made in my mind between Bogotá and Brussels had nothing to do with the presence of the smurfs (or smurf and smurfette) in this plaza. Nor the llamas. 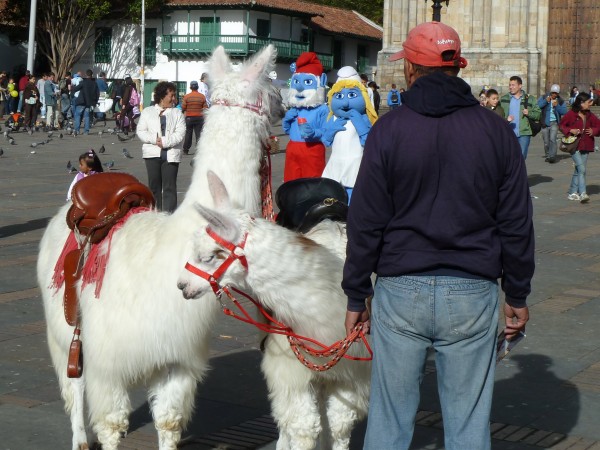 Check out Usaquén, have some soup. Go to the Spanish tapas place where they lock the door after each customer, and everyone seems to know each other. Go to the upscale supermarket where half the milk is lactose-free, and they have fancy tea, and male couples in their 30s predominate. If you eat at the restaurant Patacones, know that this is a giant stretched “dough” made of fried plantains, spread with any manner of topping, and that there are lots of plantains hanging in the restaurant.

Don’t bring a gun on the bus. 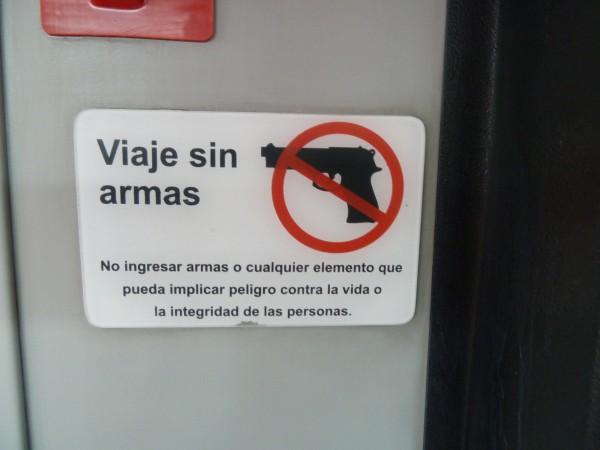 And then go to Medellín.

And by the way, if you think you’ve read the expression “cheese-flavored gum” here before, it turns out you’re right. I have spoken briefly about Bogotá before, in this piece that is so full of snark, I had to read it twice. Also mentioned in more detail, the great airport snafu of 2012.