Before I start this post, you should know that not only am I a terrible navigator (rendering me nearly useless as a copilot, though I will keep you supplied with snacks), I am also not a particularly good artist.

There’s a funny aside here about how when someone talks crap about something you know I’m not good at, I can really shake it off. On the other hand, if you insult something I think I’m competent at, it makes me all grrrrr. Which in my case means I usually get up and walk away. Dangerous times, I know.

But this isn’t really about me, though it does demonstrate a willingness to and proclivity for saving tiny scraps of paper. Since I’m often lost, I often have to ask people for directions. And sometimes, when I’m really lucky, they will draw me a map.

For example, here’s one someone drew me in Arequipa to show me the location of something or another. Arequipa is a city set up on a grid system, so the streets are straight up and down. Often people don’t know the names of the streets, so they just tell you, three blocks up, two blocks over. And in Arequipa I was almost never lost. And though I don’t remember what this map was supposed to help me find, I am quite confident I found it (and then likely photographed it).

Exhibit A is the white one. I am on my iPad because I’m on travel and that’s how I roll. Photo insertion is tricky at best, so please scroll and return.

Exhibit B is the pink one. This map was drawn for me by a man in Suriname who worked at a little hut that was the guard booth before some kind of official building. I was trying (along with a hijacked friend) to go to Fort Niew Amsterdam. There are tours you can go on, but instead we rented bikes and decided to make a go of it on our own. What’s funny about this map is that the road depicted? It’s the only one there was. There was no chance of turning left or right, or of it branching off, or even a fork in the road. So we laughed and laughed at the map, thinking of how unnecessary it really was. And then promptly got lost on the way back.

Hey, I warned you.

Also, greetings from the Atacama, where I just went for a swim in the desert. Really. Details to follow.

Click the photos to embiggen. Yes, I said that. 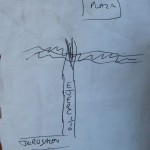 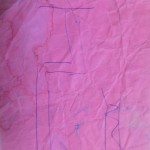