What’s in a name? Vegetables and adjective use in San Francisco and Santiago 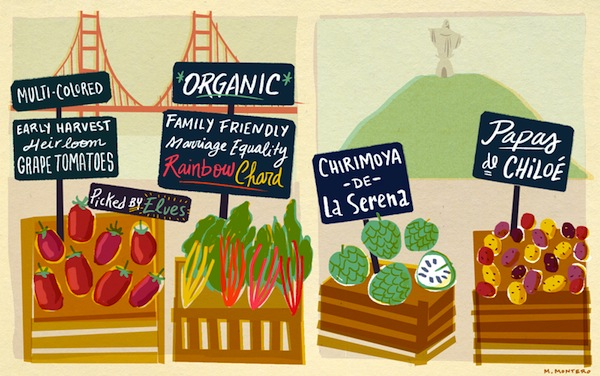 It is impossible not to notice many differences between there and here. In my case, there is the United States, and here is Chile. More specifically, I’m going to compare San Francisco and Santiago, and our take on food products.

In the United States, there have been many books published on food politics. I particularly recommend Michael Pollan’s The Omnivore’s Dilemma (which did not turn me into an omnivore), and Barbara Kingsolver’s Animal, Vegetable, Mineral (which did not make me move to Virginia).

Some of the basic tenets have to do with a bit of back-to-the-land coupled with no cruelty, do-it-yourself, and always, locavore eating. Eat locally. Don’t buy imported berries out of season (from Chile!), wait until they’re local and eat them excessively, until your teeth turn blue.

What’s funny about this, is that as the United States learns these lessons, here in Santiago, it’s just how we live. A trip to the Vega on Tuesday yielded winter fruits and vegetables. It’s not my favorite time of year for food, except for the cruciferous vegetables. I miss the aforementioned berries an awful lot, and also tomatoes so juicy you need a moat around your cutting board to cut them.

The other main difference between San Francisco and Chile in terms of food products, is a bit of a nomenclature disconnect. As food practices grow (or return to being) ever more precise in San Francisco, you have very adjective-heavy food products. Salt, for example, is no longer salt. It is Himalayan (extra points for pronouncing it hi MAL e yn) pink salt, and smoked salt, and salt flakes. NaCl has moved beyond “it pours when it rains” Morton’s iodized table salt, and has become a terroir-produced products. You have salts of origin, cachai?

But it’s not just salt in San Francisco. It’s tomatoes. They’re heirloom, from the Central Valley, harvested early or late, ripened on the vine, grown on ancestral lands, picked by well-paid workers who get health insurance (this part I do think is important, prices be darned).

See what I mean? In Chile, we have tomatoes. They often come from Limache. Sometimes La Serena. These do not follow the 100-mile rule, but they are from here, trucked down I-5 (The same I-5 that runs through California). They are also light on adjectives. Sure, you might get something organic, or oranges that say “Fanta” on the sign above them, a joke about how sweet they are. But you’d never find elaborately-named adjectives-strung-together-like-hand-popped-popcorn-on-a-string food. It’s just food. And I’m sure whatever they’re producing in California is haughtier and harder-to-find and lovingly tended by fairies. But here we just have great produce. And the food naming tradition in California (and other places in the US?) is also tremendously fun to poke fun of (see illustration)

Finally writing this post which has been kicking around in my head for quite some time was inspired in part by David Sedaris, who jokes, in a piece called Today’s Special in his book Me Talk Pretty One Day “I’d order a skirt steak with a medley of suffocated peaches, but I’m put off by the aspirin sauce.” So consider that another book recommendation from me to you.

Manuela and I are friends on twitter. She tweeted that she enjoyed the blog, and I tweeted that I liked her work. She then generously offered an illustration for the blog. We exchanged a few emails, and she nailed it on the first try. If you are an illustrator and would like to be featured here, feel free to drop me a line at bearshapedsphere@hotmail.com. I’m excited to share my meager platform with other artists. I am extremely pleased with how this worked out, and I hope you like it, too! Drop by and give Manuela some love.