The first time I said I was planning on going to the Persa Bio Bio (Santiago’s giant, sprawling fleamarket and surrounding stalls near the Franklin metro stop, follow the signs that say “salida a placer” and try not to laugh), the guy I told narrowed his eyes, and tried to freak me out. What if they tell you something costs, for example, “tre peso”, he asked. Well, I’ll assume it costs 3,000 pesos then, since nothing can cost 3 pesos.

What if, what if. And stories of videogames that were wrapped out of sight and later revealed to be a rock, or a brick. And pickpocketing, and heaven only knows what.

I’ve been to Bio Bio many, many times. On foot, and on bike and to eat delicious Thai food. Nowadays I don’t often take the opportunity to just amble wildly, since I really don’t need anything, and often going to biobio translates into buying someone else’s discards, or some ridiculous storage item I don’t need. As I was telling a good friend yesterday as I was failing to buy a rug at a store that sells rugs and many other household items, “in general, people don’t have a storage problem, they have a stuff problem.”

And really, if you keep your wits about you, and don’t do anything stupid, BioBio is absolutely fine. They even have a little police hut, where the main question of the day seemed to be “do you know where the thai place is?” 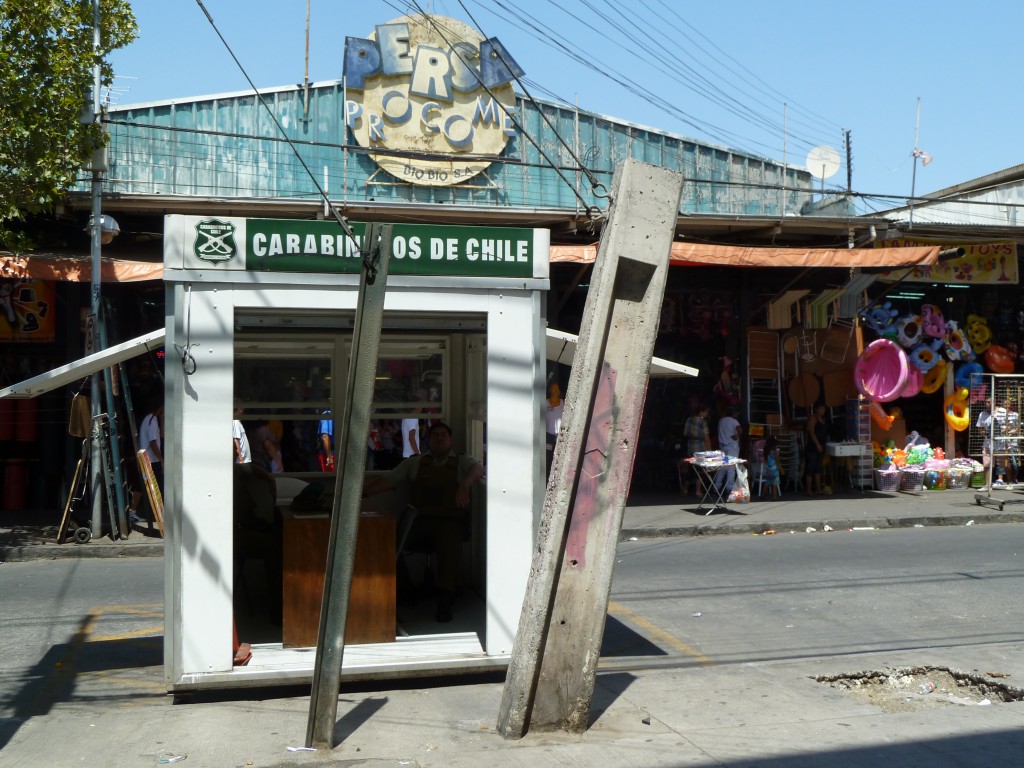 But not long ago, another friend that is leaving for a long haul, but will eventually come back, wanted to pick up some handlettered signs to give as gifts for when she goes back to Oz. Sadly, not by heelclicking, but by flying in a giant can for many, many hours. And I took this chance to hobble (see: recent injury) through the fleamarket and get my (actually, Pam‘s) iPhone unblocked. So I went into the galpón (hangar) where they do computer stuff, minded the signs that instructed me not to photograph things (let’s just say not everything is on the up and up in such an establishment), and asked at one booth if they unblocked iPhones. They directed me to another, and there, in a very sweaty stall filled with cases and charms and chargers of every description, was an early 20s guy multitasking his heart out. I brought him my phone, and he got to work. And a lot of work it was.

I finally got the phone back from the guy, paid him 10,000 CLP (about 20 bucks), and left the galpón. (The stall is “skin phone” and is in the second aisle and is the second location in in the galpón de la computación on Placer past Santa Rosa, but you can also get phones unblocked downtown, apparently). I rendezvoued (rendeznoued? rendezje’d?) up with my friend, who had purchased some signs and then we went outside, where this horse-drawn, hand-painted cart was waiting. You can see the street sign (Placer) in the foreground, and the actual galpón entrance in the background. Unfortunately, the horse driver was nowhere to be found, so I didn’t find out what he was planning to cart with his vehículo a tracción animal, but earlier in the day I had seen a guy leading two un-saddled donkeys down the street as well, so maybe it was a thing. 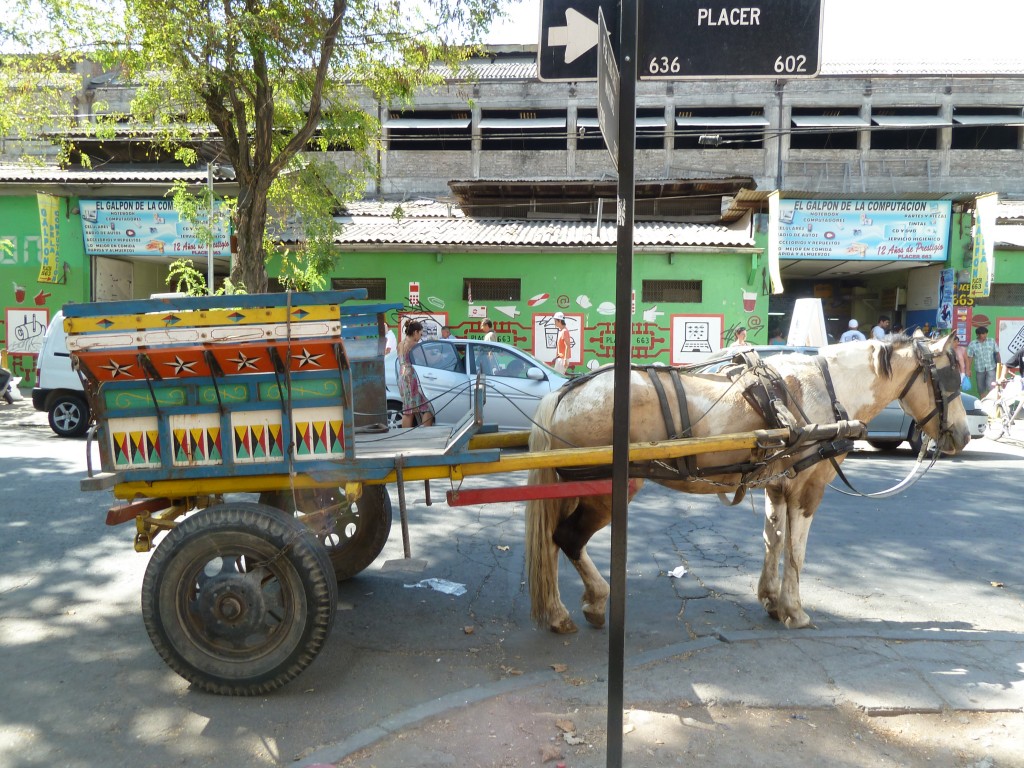 Cell phones and hand-lettered signs and Thai food and horse-drawn carriages. What is wrong with me? I need to go to Bio Bio more frequently. Hand-lettered signs pictured below. Favorite saying, “flying horses don’t need spurs.” That may very well be true. 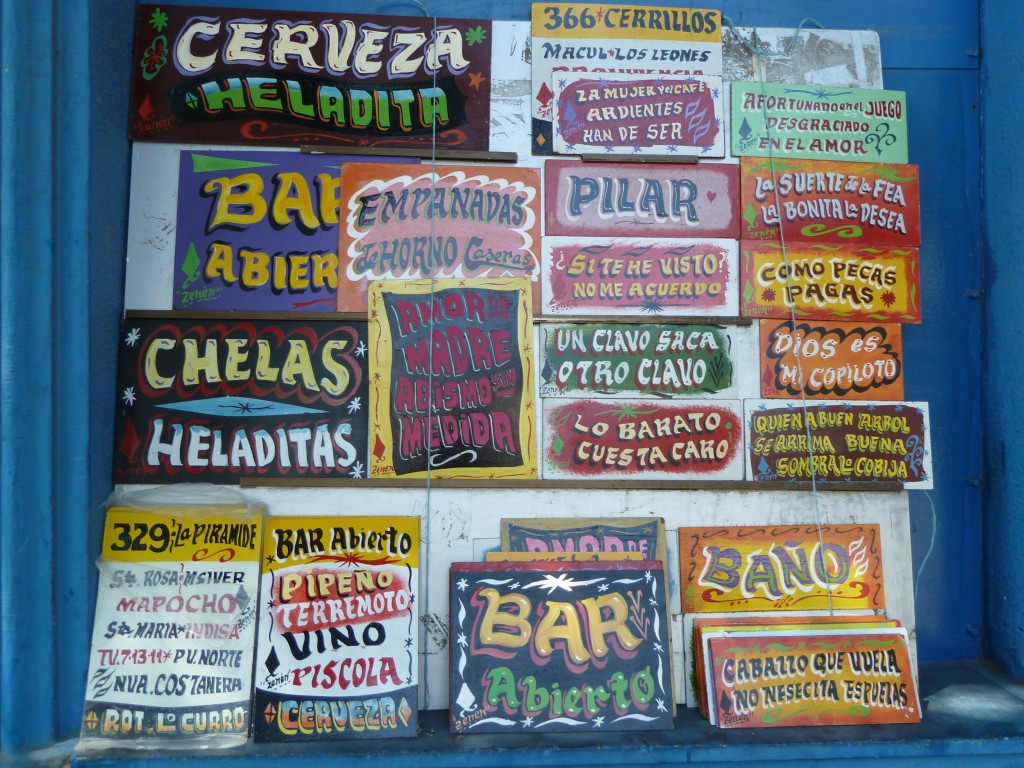 The signs are available on Sat and Sun, from Zenen, the gentleman who paints them. Prices run from about 5-8 luka (1 luka= approx $2) on up to about 20 luka. You can commission a particular sign from him, but if you want them before the next weekend, you’ll have to pick them up from his workshop/house. Find him slightly south of the Placer/Sta Rosa intersection on Santa Rosa.