Reading my former me, with photo from 1992 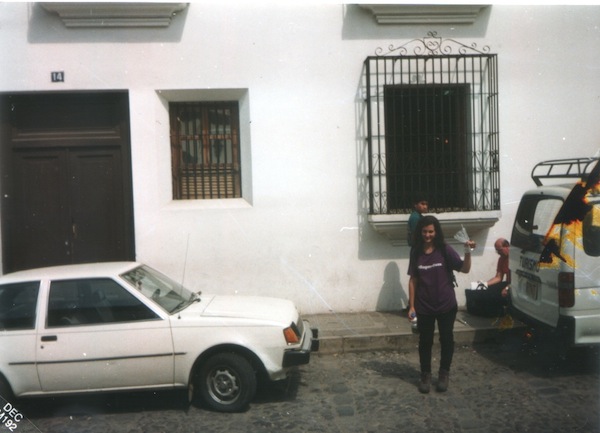 Nineeteen years ago yesterday I wrote the following in an unlined sketchbook during a six-month backpacking trip to Central America I took with a good college friend, who I am now friends with on facebook, but haven’t really spoken to in years.

Nov. 14th, Saturday 1992, 8:32 AM. Debbie is rushing through Anna Karenina in an mad attempt to finish it before the pending bike ride.

We were at Doña Luisa, in Antigua, Guatemala, and I was 21 years old (there was no website then, what with the web being a gleam in some programmer’s eye at that point). I had graduated from college, saved a bunch of money, and landed in Mexico City, high school Spanish hidden under a year of high school French and three and a half years of theoretical linguistics piled on top. I was one month and one week into a six month trip that would be punctuated by phone calls home from telephone offices where chickens would scuffle out of the way and I’d find out first what I’d gotten on the LSAT and later, that I’d gotten into law school.

I was a baby then. I was chuffed with myself all the time, when I wasn’t balling my hands into fists, frustrated at not understanding a word anyone said to me, or when the rude gringa at the cookie shop didn’t understand us when we asked if the mineral water was cold, and finally we bluffed it so badly that we ended up with “hace frío?” (Is it cold out), and she narrowed her eyes, and said, “Qué, el día?” (What, the day?). But we ate the cookies anyway, because we were so desperate for something that tasted familiar. I have no idea what kind of cookie I ate, but I remember her nastiness to this day.

We traveled with sketchbooks to write in and film cameras (and film canisters) and the classics, Anna Karenina, and Gulliver’s Travels (of which about fifteen pages were missing in the middle, which was a great disappointment first to me, and later to my travel mate). We also read 100 Years of Solitude, in translation, and when Debbie nearly fell out of her hammock in our hut at Puerto Escondido, she said (referring to the book, and how hard it was for us to sleep in hammocks) said, “they had sex in these?” We would later trade these books for others, including Prozac Nation, and Jurassic Park, which couldn’t have been any more disparate from what we’d brought with us, but we needed information, text, English.

I brought this unlined journal back with me on one of my more recent to the states, hoping, unsecretly, that I would find 21-year-old me to be wiser than she felt at the time. Instead, it’s filled with the kind of rambles that make me glad that in addition to the lack of technology that kept me dialing home every second or third week on a public phone by punching in dozens of numbers, so that the calls could later be billed to my mother’s credit card, 1992 me did not have a blog.

One of the things that marked that trip was an unsettledness. I never knew where I would sleep the next night, who I would meet, what people were saying to me. And over time, I’ve gotten away from that. I speak a couple of languages now, can email people, make reservations, and I’m older, and in my case, that means I don’t spook so easily. I also stick to the Americas, Spanish or Portuguese speaking. I have a guidebook, make plans, travel for work, meet other travel bloggers on the road.

But I’m leaving on a trip tomorrow, that will take me to, among other places, Suriname. Where I don’t speak the language, and will probably have no idea what is going on much of the time, and due to circumstances beyond my control, alone. I am ridiculously excited about it.

I would love to see a glimpse of that former me, but hopefully without the hubris and the balled fists and the frustration. Though I wouldn’t mind having that super pretty purple Haagen Dazs tee shirt that I used to wear as a uniform when I worked there in Brooklyn as a kid. And a bag full of water with a straw, which is what I’m holding in my hand. Because staying hydrated (unlike those ridiculous jeans I’m wearing) never goes out of style.