Thrice-bitten, what to do if you’re bitten by a dog in Santiago 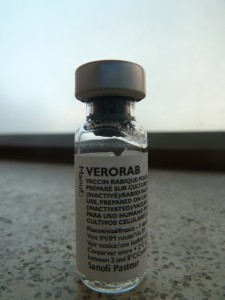 As you may guess from the title of this blog post, yesterday’s second foray into the big city on roller blades did not go exactly as planned. Which is how I find myself the proud owner of a multiply-punctured and torn pair of pants, a well-defined tooth-scratch/bite down the back of my leg, with accompanying pretty green bruise, a carefully-applied piece of gauze, and a small piece of paper exhorting me to go back to the clinic for the next four doses of rabies vaccine.

This is not the first time I have been bitten by a dog here in Chile. In fact, it is the third. The first time I surprised a nursing mamadog, and she lept up and bit the back of my knee/thigh (I was wearing bike shorts at the time). I was on a long bikeride, and no one seemed too concerned, so I just kept riding and later investigated the prevalence of rabies in Chile, which is very low, in dogs, depending on who you ask. (Update: as of August, 2013, there is a possible case of rabies due to dog bite in Viña del Mar. Rabies is almost always fatal).

The second time I was biking down Catedrál, along the Plaza de Armas, when out of nowhere, a dog sunk his teeth into the heel of my Keen shoe. She didn’t get any blood, but I got the scare of my life. I wrote about it here.

And then there was yesterday. I was heading to a friend’s paella party, with three carrot cake loaves and some frosting in my bag, along with a change of shoes and a coat and scarf that belonged to the paellero, accidentally left behind. I was blading along, and I saw a dog make eye contact with my skates. He was lying beside a kiosk in a tree-well (like a tree box, but sunken), and he lunged. Of course he knocked me over, and ripped the hell out of my pants and scared me something fierce. I immediately blamed the kiosk guy, asking “Is that your dog?” Which is stupid, because of course he’s not his dog. Why is a guy who sells newspapers going to adopt a dog for real? He might bring him some food, but that’s where the relationship ends. I bought some bubbly water to immediately flush the wound, and then went on, washing the cut out with laundry detergent, and later bleach, when I got to my friend’s house. But first I talked to a cop on the street, and she advised me to go to the posta (public clinic), which I pshawed, and then skated away quickly when some well-meaning onlooker tried to engage me in a conversation about the street dogs, a topic in which I am already well-versed.

Then this morning I woke up and thought, okay, Smith. Think about this. You’ve been bitten three times in seven years. Doesn’t it just make sense to get the post-exposure vaccine, so that the next time it happens (and I feel confident it will), you can just get the booster and be done with it? 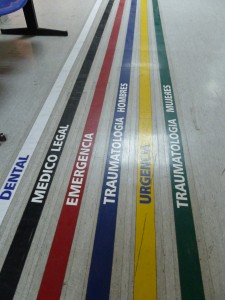 These lines tell you where to go.

So here’s the scoop. Bitten by a dog? Try to get a good look at it. Street dog or owned dog? If it’s an owned dog, check out its rabies vax situation. Don’t assume that an owned dog is up-to-date on its vaccines. If the dog bit you totally unprovoked, and/or seemed to be in a bad state, mention to this to the doc. My course is only 5 doses, but there are courses with more, and that include immunoglobulin (a human or equine blood derivative). 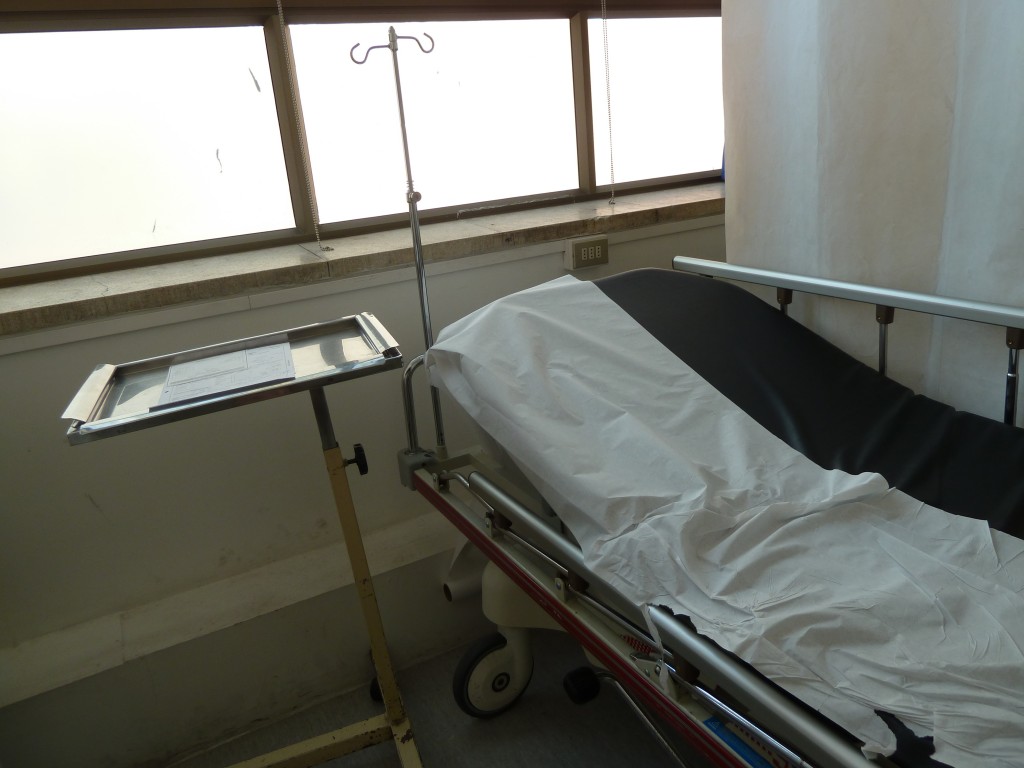 Then go to the posta. In Santiago there is the Posta Central, a short walk from Santa Lucía metro, at Diagonal Portugal con Paraguay. Go to the “urgencia” and tell them you were bitten by a dog (Me mordió un perro). Though if you have private insurance in Chile (ISAPRE), attention at the posta is generally very expensive (29,990 for a single visit! (more than 60 bucks!)), attention for a dog bite is free, as is the vaccine. Score. there are postas all over Chile, and there’s another one on Salvador near Rancagua, but this one was closest, so it’s where I went. They’re public hospitals, but not frightening, not dirty, not overcrowded or undersupplied or understaffed. They look different from the private clinic I go to, a little worn around the edges but to all appearances, they are more than adequate. And more than surprised to see a gringa this morning. 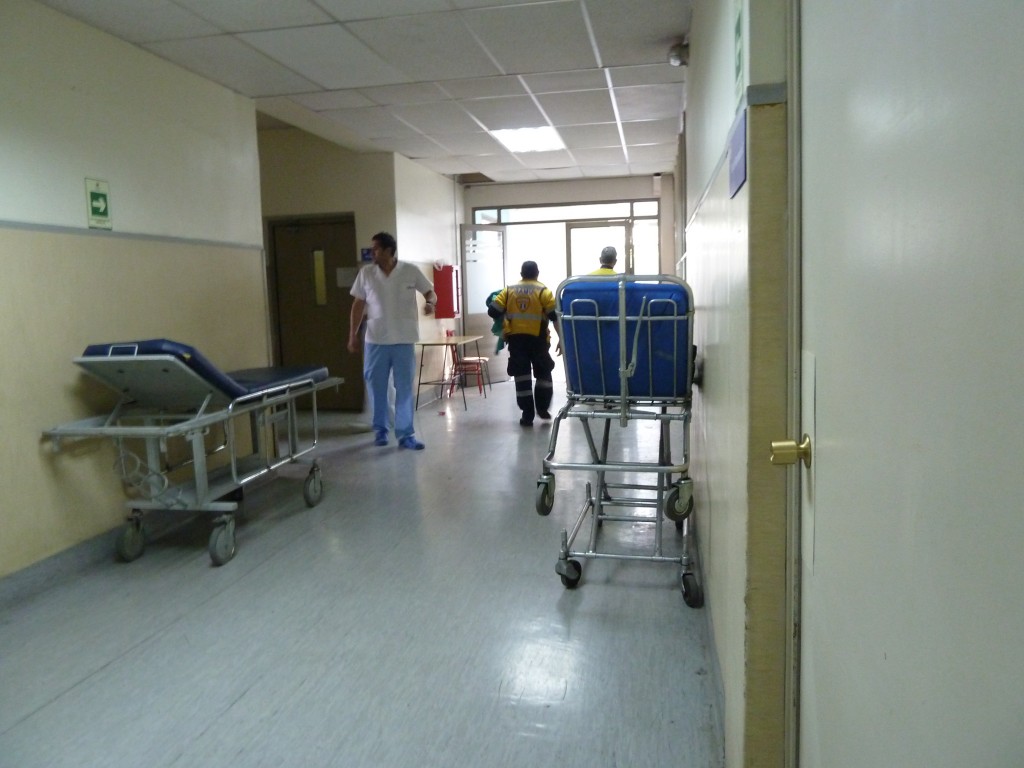 I was in and out in a half an hour, and the doctors and nurses all seemed incredibly entertained by my story, and the doc who saw me wanted to make sure I was uninjured in other respects, and so squeezed me a bit. He probably couldn’t understand how someone could fall on skates and escape unscathed. I told him, “I’m an athlete, I fall all the time, plus I was wearing wrist guards”. After the vaccine (in the deltoid), the nurse irrigated the (now-closed) wound with sterlie solution and taped some gauze of it. I can’t help but think that my laundry detergent and bleach routine was more effective.

For the follow up I have to find a “consultorio del barrio” (neighborhood clinic) somewhere near where I live. Which will be yet another fun, first-time, bloggable event. There are five shots in all, one at day 0, one at 3, one at 7, one at 14 and one at 28 days. I think I won’t be in Chile for my 28th day one, and when I told them I could just get the vaccine in Peru, they were all, “it’s different! not the same! protocols are different! vaccines are different! Peru!” Which means either I’ll delay the 5th vax, get it in Peru or start frothing at the mouth.

I (mostly) promise not to bite anyone.

bonus: today everyone I heard getting interviewed about why they were at the hospital was asked about their meat or alcohol consumption in the wake of the national holiday. That made me laugh a little. Hope everyone’s ok.