In the course of about sixteen hours the following things happened in my life. The things that could happen in anyone’s life, at any time, but that happened to me, in Chile. Which make me love my day, my life, Chile, or some combination thereof. 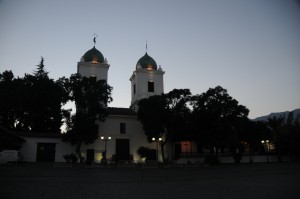 First, I woke up early and headed up to this church, at the end of the redline metro. I’ve never seen it so early in the morning. I’m not religious (and don’t find a terrific amount of use for hte $2000 peso bill ($4, it’s on the back of the old one) since things are getting so expensive here lately), but I was happy to see the dying dark and oncoming dawn.

Then I got into the car of a Venezuelan guy I don’t know (this is part of the deal with the hiking group, the carpooling part), and drove to the start off point for a hike. In my life, I have only seen two places in South America this crowded with people for starting a hike, and they are Wayanapichu at Machu Picchu, and the entry point for Torres del Paine. Ugh. I almost left. 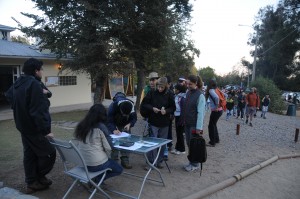 Though the number of people was hideous, entering this park from this side is infinitely more pleasant than entering it from the San Carlos de Apoquindo side, especially since now they say they won’t let pedestrians in (according to the Venezuelan), though some friends recently went mountainbiking there, and all was b’seder (fine, in Hebrew).

We hiked up and away from the masses of people, many of whom stopped at various points along the way. It’s about 7 km of terrain like this: 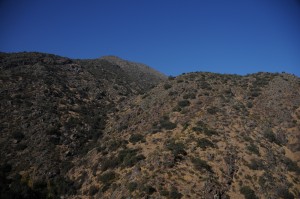 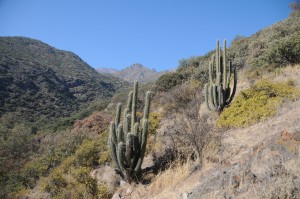 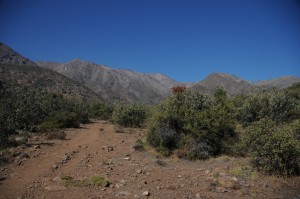 And there was a waterfall and a guy washing the lettuce for his lunch in it and I scooped up water and dran it and it was delicious. And then we all walked down (elapsed time, a ridiculously long 8 hours).

And then I got home, took a shower while my food was in the oven, got dressed, ate, and got on the metro to go to a birthday party. It was in San Bernardo, and I had to take the yellow line, which must have the highest concentration of humans after the black hole of Calcutta, at almost all hours of the day. The guy behind me was wearing a chupalla, a giant, brimmed straw hat, which kept on hitting me in the back of the head, which was very annoying. Over my right shoulder, a long-haired pale boy was solving his Rubick’s cube.

Then I was at the party, and a good time was had, and the bleu cheese empanada was poca tradicional, but delicious.. I took a taxi home because it’s the best/safest option for that route, and a guy probably hopped up on pasta base (a very addictive cocaine-derivitive drug, called paco in Mexico and which tends to be more popular in poor/at-risk populations, a hit costs about a luka, or about $2 US.) trying to wash the car beside ours’ windshield. When the guy in the car said no (because he had no coins to give), the squeegee guy said “Te lo regalo!” (I’ll give it to you for free!). And he did. And the taxi driver told me about this old guy he knows who’s an addict, and we talked about how long people can last if they consume pasta base habitually (not long, a couple of years would be alot), and what a scourge it iis, and how their teeth fall out. And then the car died, and we drifted to a halt, but he got it going again, and dropped me at home, wishing me a good night and calling me señorita.

Sometimes when I have days this full I wonder if my next day I should just sit around and do nothing to even it all out. I hope you will forgive me for not taking a picture of the very full metro, the guy with the giant hat, the Rubick’s cube, the empanada, or the squeegee guy. I have a picture of the guy washing lettuce, but I have to send it to him. His name is Christian, which along with Marcelo and Claudio, has to be one of the three most common names here. But washing lettuce in a waterfall is pretty uncommon. And so was Saturday, April 30th. And yes, I slept very well!