Despite the fact that hiking is not my thing, per se, and that hanging out in large groups in the wilderness tampoco (neither), I have recently “joined” (which means I am friends with them on Facebook, I think) a hiking group in Santiago. And it’s all Heather‘s fault, but like many things that end well, she shouldn’t be blamed for that.

Yesterday I schlepped up to Tobalaba metro for an 8 AM departure, which is terrible in some respects, but on the other hand, since the Chilean government still hasn’t deigned to change the clocks, and it is pitch black at 7:20 AM when I headed out of my house, I kind of liked having my Leki trekking poles with me. It kind of aggressively asks the question: You talkin’ to me? You can take the girl out of Brooklyn, just saying.

So, pickup, car arrangement and we were off, up into Cajón de Maipo (about an hour by car) which, when I first visited years ago (in 2004), I remember saying to the guy I was pedaling with, “what is this?” meaning, is it a national park, a reserve, what? And he said, it’s just a place. It has a road, we can bike on it. Cajón de Maipo is the area along the Maipo river, speckled with the occasional town, side-of-the-road eatery (some better than others) and really fabulous hiking access. I’ve been up here hiking just a few times, but have biked up many more. The cycling is good for the macro view, the from-the-car-but-slower and no windshield view, where hiking is better for getting out into it, hearing the crunch of loose rocks and the peck of your poles into the dirt. And seeing lots of rocks.

This hike started just past the bridge called El Manzano, where we picked up JP, our guide, and the lovely Linda, a medium-sized Australian Shepherd-looking dog who would wind her way back and forth among us and make sure we were all keeping together. Or tear through the trees on “dogs-only” shortcuts.

Like all hikes in the RM (near Santiago), this one started by climbing up, up, up into the mountainside, a soft zigged trail with leaves turning back into dirt and quite a bit of Schlerophyll forest (Bosque Esclerófilo, vaguely similar to hollies, but not so pokey), such as the indigenous Peumo, which was bearing its bright pink (inedible) berries at this time of year. From there, as geography would dictate, there was more up, and then more up. 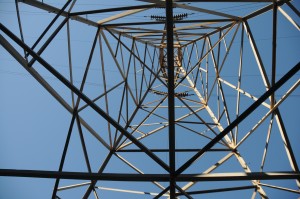 We passed these unfortunately-positioned high tension towers,which despite being a scar on the landscape, are actually kind of fun to take photos of. 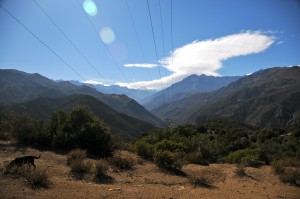 And the wires hanging down also made me think that perhaps instead of hiking 12 days to Volcán Tupungato (the rounded hump in the distance, an Argentine peak of 6550 meters, the largest mountain south of Aconcagua), I could simply zipline over to it, and of course I’m kidding, but look for yourself, and tell me it’s not tempting.

At this point we split into two groups, those who’d continue up and those who’d go do something else. I wasn’t part of the decision-making (and actually may have been peeing behind a bush at the time), so I don’t know how they all decided, but several people descended again and spent the day at a campsite by a river. Not a bad day, but it had me a little worried about what might be coming ahead. 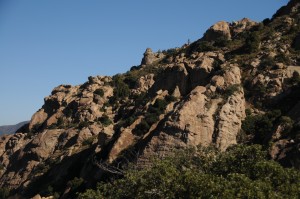 There was more up (of course), and wide-open vistas and a series of rocks that made me wonder why much of Star Wars wasn’t filmed in Chile. Or any other sci-fi movie, for that matter. If this were my mountain (and it is not, though JP pointed out, it is his “backyard.”), I would give them all names. This one I would call mushroom rock.

This one, I’m not sure, but I think I’d call it singing muppet rock. Or shrieking rock? Certainly, to my eye, those are mouths. 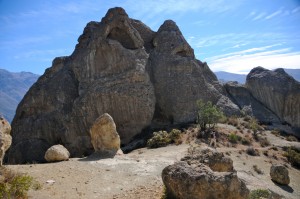 And in case you weren’t sure what I meant by up, I’ll post this one of the group (which if you want to know, drop a comment and I’ll point you in the right direction). 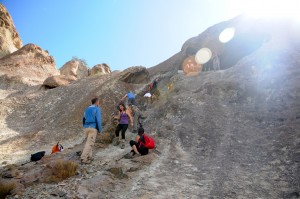 The sun was directly behind the cave at hand, and not even the mighty lens hood could block it all out. I very nearly went blind shooting into the sun, so please, no complaints. 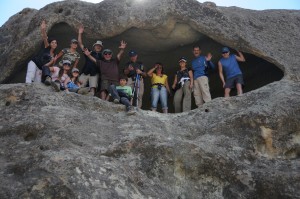 And here’s everyone that wanted to be up there up in the cave. I misunderstood the “cave” part of the hike, and thought there would be, oh, I don’t know, caves. Caverns, grutas, cavernas. Stalagtites and stalagmites. I brought a headlamp. Go ahead, giggle.

And then we sat and people ate their lunches, and I surprised a new (to me) gringa friend with a sandwich about which later she commented “I never thought I d see anyone eating a cream cheese and jelly sandwich in Chile” and it was blackberry jam, and it was delicious.

And then we started the long, long hike down, and the lovely Linda washed off some dust in an irrigation canal and left tiny muddy footprints for some time, and the new (to me) gringa and I sat and waited at JP’s work-in-progress cabin and waited for the rest of the group to arrive, and there were more sandwiches and coffee and tea and face washing and back-scratching for the lovely Linda, pictured below, mid-hike, wondering if this kid was going to share his blue gatorade with her. Answer: not really, but she had some water, and a piece of an oatmeal cookie, though she rejected the egg sandwich. Mañosa. (picky). 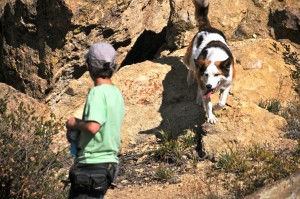 And then we drove back to the city and food and showers were had by all, or at least by me.