Inédito! (Unheard of!) Pecan pie in Chile! And language musing.

Today on my way to the land of pink and trivia games and measuring of pregnant bellies with soft woolen yarn (darnit, didn’t even come close!) I took the metro. I did this because, despite major obstacles, such as the great pecan seizing of 2008 and also the very overpricedly available pecans and Jumbo and Santa Isabel (2990 CLP for 100gr, or about US $25 a pound), and then the finding of pecans, but in their blasted shells, which lands! are they hard to get out (especially with no nutcracker), I had made a pecan pie. 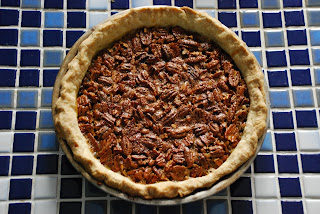 So because of the pecan pie, which upon leaving the house, I could see at least looked prettyish, and this I did not wish to destroy with the jostling that is biking from my house to mountain-backdropped Las Condes, I decided to hoof and metro it up to the baby shower. On the way, I clutched the pie, and became mesmerized by the LCD display which repeatedly scrolled through information such as the metro schedule, the busses you could take when the metro closes (11ish most days), and asking you to please not talk on the phone on the stairs and escalators, not to run on the stairs (escalators ok, apparently) or on the platforms (shout out to Abby who learned this word in English the other day), and to not sit on the floor in the metro cars. The metro also seems to doggedly be pursuing the word punta instead of peak (said with Chilean accent) to describe rush hour, an effort which goes completely unnoticed by everyone, as we all still refer to rush hour and the price the metro costs during that time as “horas peak.”

Among the messages being blipped across the screen was one instructing me to (I believe, I got distracted by the word choice, as you’ll see) charge my BIP (say: beep) card at off times, to avoid… something.

The word they chose here was aglomeraciones. I don’t argue with the use of this word, exactly, even if the informal Chilean word and the word I would normally hear or use for crowd is choclón (from choclo, or corn, see how crowded the kernels are?) You can hear a very dapper sounding Spanish speaker say the word here, if you were so desirous.

I’m not arguing with aglomeración, I’m sure it’s a perfectly legitimate word for crowd. I think of congestión, maybe a taco (Chilean for traffic) peatonal, mucha gente, even muchedumbre, but hey, the person who programmed the LCD screen is more of a Spanish speaker than I am.

But as an English speaker, I was thinking of myself as one of a number of particles, and thinking how if we were to clump together, or agglomerate if you will, it would be harder for us to get out the exit gates of the metro. The thicker the solution, the slower it moves. Which is exactly what I was waiting for last night at about 7 PM when I called my personal 24-hour cooking hotline, also known as Mamaj (get your own) to find out how to know when my pecan pie was done. She wasn’t there, so I had to rely on the second string, someone’s uncle Google.

Did you see how pretty it looks? I also made fudge (for another party, zero pregnant people there, also no pictures) proving that I’m good at changing phases of matter. If I ever participate in guerilla public service announcement vandalizing effort, you can bet I’m going to do a play on words. Avoid thickening! viscosity! solidification!

post-post! I violated Smith family tradition and made this pecan pie recipe, rather than the one on the corn syrup bottle, using 1.5 cups of pecans because darnit, I’d already (painfully) shelled them. I also did not use Texas pecans, and do not hold the authors responsible for the deliciousness that resulted.

post-post-post! I imported the corn syrup from the United States for the pre-pecan seizing plans I had in November. I don’t know of any local equivalent, choclo be darned.