What’s in a pichanga? Chilean food analogies that make you go hmmm.

In addition to word surgery, I do alot of other things with words. Mostly collect them into a word maelstrom, that I can choose from when I wish, but which I don’t really know the etymology of or how they might be related to other words.

Then I find out, and laugh and say aha!

Like how a Chilean fillingless tamale-like thing and a bow tie have the same name in Chile. Humita. The first one, comes from the Quechua huminta, which explains why this snack or something similar is seen all over the Andes ) and the second one because it’s squinched down in the middle like the first one. Except I couldn’t find a picture that showed the squinch, and the last time I ate a humita I was really, really sick and I’m pretty sure it had a pigfull of lard in it and this girl doesn’t eat lard (without knowing), and she also doesn’t eat bowties, but sometimes they do look darn tasty, like these, which here we call, strangely corbatitas, even though they look like bowties, not tie-ties. I suggest a name change. 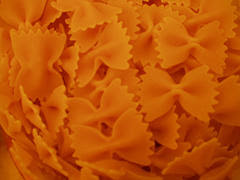 The other (food-related) thing that I recently found out is also the name of something else is pichanga. Pichanga is a snackfood you (and I mean you, because I do not) eat, while hanging out with friends, drinking a beer, etc. It’s cubed salami or other embutido (cold cuts, here’s a pretty picture, it actually means funneled) along with pickled veggies and onions. I’ve never eaten it becuase of the meat cubes, but I’m sure it’s delicious, and it looks nothing but appetizing as it’s spooned into a plastic bag at the grocery store and sold by weight. People have their favorite places to buy pichanga, and I’m sure it’s tasty, but I can’t help but think that it developed as a way to dispose of the embutido ends when no more slices could be sliced.

A pinchaga, I recently learned, is also the name of an informal pick-up soccer game. Why do they call it pichanga, I asked? And I was told, “you know, you got your fatty, your skinny, your big guy, your shrimp, it’s a bit al lote (random). I just hope if I ever play in a pichanga I get to be the pickled carrots, because I really don’t want to be an embutido end.

In other news, while ensuring (or trying to ensure) that I wasn’t spreading misinformation either about Chilean food or informal Chilean soccer matches, I also learned that some people call the business in the front/party in the rear mullet-style haircut a “changa” from pichanga (after the soccer match, as the soccer players might have them). In another food-related haircut name, I have always called the mullet a chocopanda, so named for the gents that get on and off the bus with their cardboard and styrofoam boxes of icecream selling it to people even in the coldest weather (like last night, below freezing, icecream guys still out). Chocopanda is the brand of icecream they sell, and the mullet is often sighted on these vendedores ambulantes (travelling salesmen).

And if you, like me, try not to eat animal fat, then read the label on that bad boy before you bite into it. Mmmm, Grasa animal, perfect with mora crema (blackberries and cream, a popular flavor).