When a rat is not a rat, or more linguistic misadventures in Chile 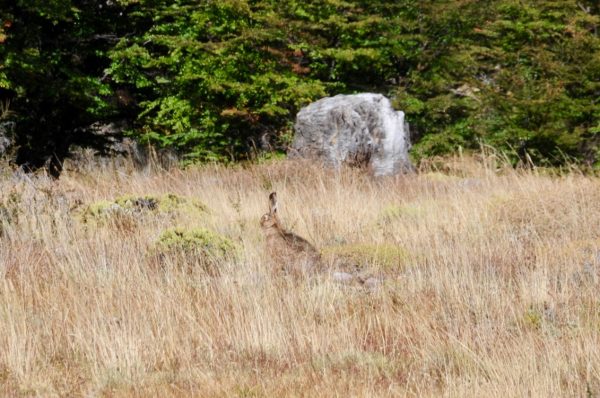 First of all, in the photo there is not a rat  Or if there is it is small and hidden in the grass. What you see is a kind-of relative of a bunny you might say. Except that for reasons that I do not understand, this bunny is not a rabbit, but a hare. Sure I can look up the difference, and know who has a longer foreleg or stronger whatnot, but my point here is that this is a single concept split into two for me. I cannot think of a single instance in my entire life when I have used the word hare, other than in the case of a hare-brained idea. In fact, I remember the exact moment I heard someone use the word hare in a sentence for the first time. We were driving around a peninsula in Southern Argentina, chasing lighthouses (which turn out to be remarkably easy to catch) and the Argentine driver/guide said “sometimes it’s either you or the hare,” referring to his inability to brake every time he saw one, because at times we’d have spun out and crashed on the gravel road. “A veces es el liebre, o sos vos“. Which sounds funny to those of us who speak Chilean Spanish, because we don’t use the vos conjugations really, so we don’t have a sos. And sos vos just sounds funny, because it rhymes, and we are nine.

Another funny thing involving hares is that there’s an expression about them, which means “to pull a fast one,” or engage in some kind of trickery, which is “pasar gato por liebre” which basically means present a cat and say it’s a hare. Which, given how similar rabbits and hares are (long ears, cotton tail, hoppity way of moving), and how dissimilar cats are (short ears, candycane tail and more walky and gallopy) seems a particularly bad pairing. I mean, wouldn’t it be easier to “pasar conejo por liebre?” (pretend a rabbit is a hare?) I for one, would be very unlikely to notice the difference.**

But you came her for rats! Well, not really, but bear with me.

There are many ways to say rat in Chile. There’s rata, which is easy enough to remember, follows that “put an -o or -a” on it rule that non-fluent speakers sometimes like to apply (with varied success, see sopa and ropa) Then there’s laucha, which I think of as country rat (but it turns out is actually a mouse, as a helpful reader points out), the kind that may or may not carry hantavirus. Lastly, there is güarén, (said like Warren, but accent on the second syllable), which is your average urban rat.

In order to tell the rest of this story, I have to introduce a third type of animal, the snake. Which, coincidentally, probably thinks all of the previously-named animals in this story are lunch. But not the kind of snake I’m talking about. There is a plumbing tool used to unblock drains. It is a long spring or cable that can be threaded through a pipe to clear out or pull up whatever is in the drain keeping it from you know, draining. One time there was a plumber in my apartment, looking at, not my sink drain, but the main “vertical” through which all the water from the kitchens in my building above mine drains to the main sewer. He said he was going down to his truck to pick up a tool.

Ever the linguistic overachiever, I responded: “oh, are you going to bring up a rat?”

You see, the word in Chile for this device (as well as one used to send cables through walls, but this is not the same tool) is laucha, presumably because they snake all over the place (see what I did there?). But in my brain, somehow the fact that in English, I don’t distinguish between country rats and city rats got all tangled up with the word for plumbing snake in Spanish, and I literally asked the plumber, instead of “are you going to get a (plumbing) snake to try to clear out the drain,” was “are you going to bring me a rat?” Alternatively, I asked him “are you going to bring up a thief,” where a rata is slang for a dishonest person, just like it is in English.

I maintain though, that despite my propensity to make semi-strangers guffaw, that my inability to distinguish quickly between lauchas and güarénes, conejos and liebres is not a major handicap. I am, after all, not a snake. And that hare up there? He was in Southern Chilean Patagonia, where I was recently. And as far as I know he is doing just fine.

** Via the magic of the internet, a friend tells me this is about stew, that you could pass one furry quadruped’s meat for another’s, in this case, serve a kitty stew and say it was rabbit stew. This speaks the wisdom of not eating stew or only eating food people you trust prepare for you more than anything else, if you ask me.