If you give a girl a strep throat, AKA clinic report, Queens, NY edition

I should have known as I was lying on the floor because it was where I dropped when I decided I couldn’t move any farther, that something was wrong. I thought maybe I had a cold, despite the fact that I had no cold symptoms. No runny nose, no watery eyes, no cough, no sneezing. Curious, this cold, I should have thought. Instead, I thought “what a tidy cold, wreaking no havoc on the people around me, not even chapping my lips. Clever little coldie.”

Or maybe it should have occurred to me when I decided I would take a bath, not a shower, because taking a shower would have required me to stand up, and standing up seemed like a colossal effort. Or when, after the bath I did stand up, I felt sure I would throw up because who needs the contents of their stomach anyway? Or when I kept on sweating cold sweats.

Finally, my friend who I was staying with said something about my stomach, and I said, “oh, it’s not my stomach, I think I’m sick,” and she wandered over nonchalantly and dropped a cool hand on my forehead and it more or less sizzled. I drank of the paracetemol fizz all the way from Europe, and it was good, and we decided that perhaps the feeling of swallowing broken glass was not normal, and that I should grab my credit card and head over to the walk-in clinic the very next morning.

I dreamt all night of going to the doctor and one of those white-labeled, clear orange bottles we think are standard for prescription medicines in the US, because yes, I had the nerve to get sick in the single most expensive health-care country I have ever been to. I had a moment of freakout, that I didn’t want to go on antibiotics because I suspect it’s one of the contributing factors to my ongoing stomach-snafu, but nor did I want to bring shame and strep upon the house of my mother, who was waiting to receive me in a few days’ time.

And off we went. I was staying in a fancy part of Long Island City, itself a part of Queens, and here an aside, to say that I am utter crap at seeing anyone anywhere except the very slim list of people that already know I’m coming to a place. If you are offended by the fact that I didn’t see you, please know that a) you are in tremendously good company b) I know, I’m sorry and c) if you really want to see me, send me a personal message saying, “next time you’re in town, I would love to meet you for an agua con gas,” and I’ll see what I can do. So back to Long Island City. 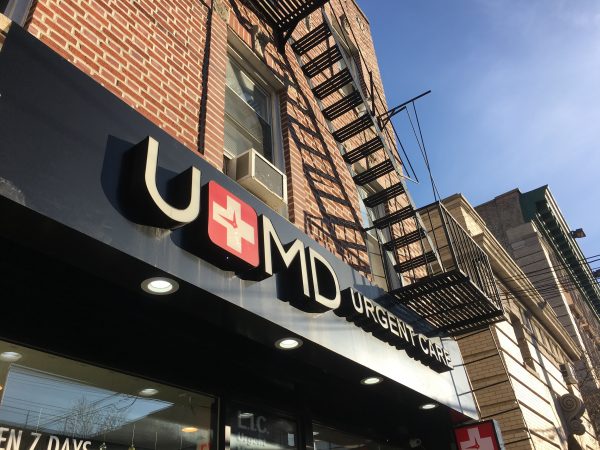 After negotiating a price, which let’s say was a) not negotiated and b) well over 10% of what it cost to fly my strep-addled throat to NY from Santiago, though the doctor thinks I actually caught strep on the plane, and that is some kind of bad math I am hoping not to repeat on my way back to Chile.

When I was ushered into the room, I marveled at the giant chair they had me sit on, instead of one of those paper-covered tables, and they assured me it was standard, and I assured them that I had not been to the doctor in the United States since 2003, if not earlier. We eyed each other warily, me saying, “I think I have strep throat” and them, already doubting me because I am ignorant to the ways of medical chairs saying, “you might, but it seems unlikely.”

They used this pretty pool chemical testing kit to swab my throat. 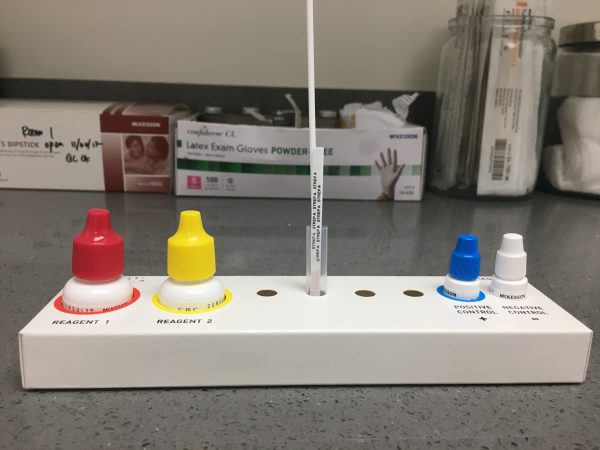 And took my blood pressure and all that fun stuff. 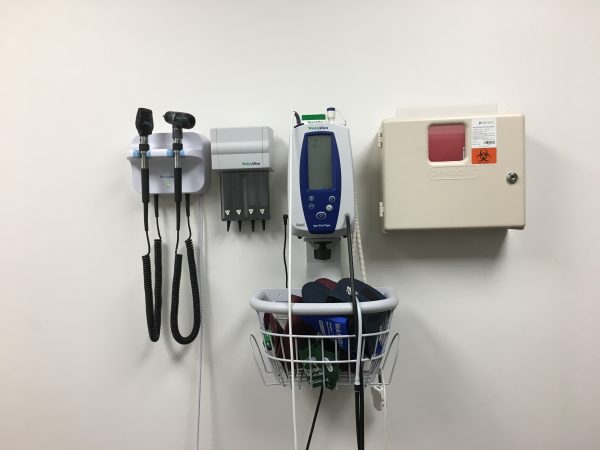 It was 116/80, which for me is elevated, which I told them and they all scrunched their faces up, because that is the very picture of a perfect blood pressure, it’s just not mine.

Later it was with great glee that it turns out that, despite low likelihood, doctor, PA and medical transcriptionist doubt, I had, in fact, contracted strep throat. The glee was because if that wasn’t what was wrong with me, I might have in fact, been dying. 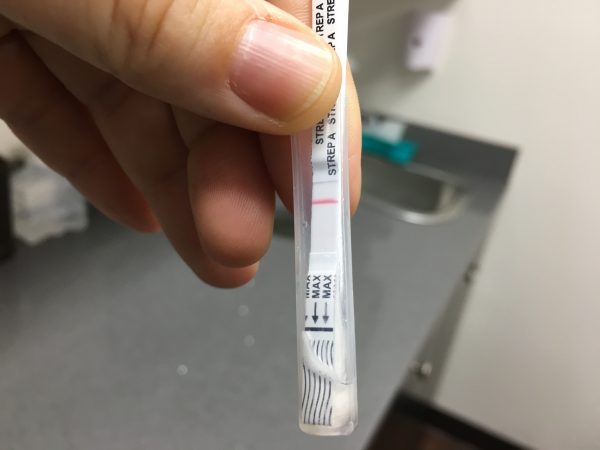 Later there were antibiotics, and a very helpful pharmacist (who wore a kippah/yarmulke which I was totally not expecting, because in Chile almost no one who lives anywhere near me does) offered me probiotics to accompany them, but I am already on probiotics for the ongoing stomach fun. Said probiotics did their job, and I never got stomach sick from the antibiotics, and after about four days it no longer felt like I was swallowing glass, which I have to say was a spectacular improvement over yes feeling like I had swallowed glass.

Since stomach nonsense set in, I have gotten colds a couple of times, and now this. I hope this was the end of the parade of maladies, as I am used to and much prefer a stronger constitution.

What I have learned from this experience is the following:
-travel health insurance is not a bad idea
-a cold is not a cold if it has no cold symptoms
-antibiotics are magic
and finally
-a good litmus test for whether you need to go to the doctor is if lying on the floor is more comfortable than being anywhere else in the house, including on a lovely nearby couch.

Be well my northern hemisphere winterlings! Here in summerland I am eating all the antioxidants in delicious berry form. And this is delightful.

PS, I do the occasional clinic report from the road, but would be just as happy to never have to do one again.