The woman who saved my artichoke 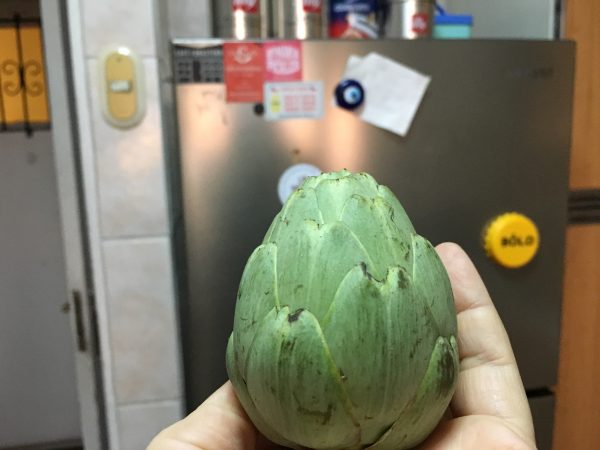 A different kind of feria report. As some of you may know, as I’ve mentioned it here, and in real life, I’m dealing with what I have referred to as a “stomach snafu.” It seems to be histamine intolerance and I won’t bore you with the details, but a lot of my formerly favorite foods, foods which everyone believes to be healthy, now make me sick. Among them, yogurt, homemade fermented goodness (sauerkraut, rejuvelac, kvass), eggplants, tomatoes, sundried tomatoes, hot peppers, soy sauce, fish sauce, etc.. I said I wouldn’t go on too long. The real head-scratcher is that these are foods that everyone swears are good for you. And maybe they are good for you. But they are not good for me, not for right now.

It has been since June since I’ve been eating different rations, for a while only rice, then rice and broccoli, later adding fish, and since September, I’ve been seeing a naturopath who has me on some supplements, and has guided me through figuring out which foods are higher and lower histamine, which ones liberate histamine in the system and which ones inhibit DAO, which is the enzyme that breaks down histamine. Too technical? Fear not and move on.

An aside to say that if you don’t have this issue, I am SO happy for you, and I do not want to (as a friend in DC says) “yuck your yums” or make you conscious of anything you weren’t thinking about before. If you think you could have this issue, I recommend googling Alison Vickery and signing up to have her send you her histamine food list, I’ve found it very helpful, together with supplements and probiotics and carrying snacks around with me, and meditation and and and.

All of that is to say that going to the feria for me now is different than how it was before. Before (and I’m going through thousands of photos right now in an attempt to wrangle more space out of my computer, and because let’s face it, many of them are duds), I used to pile my table high at this time of year with tomatoes and eggplants, berries of all sorts, and in between cook pots-full-of black beans, and this was what I ate on the daily. Wandering through the feria now is an exercise in “nope.” Tomatoes? nope. peppers? nope. eggplants? triple nope. Beans? no way. Olives, no thanks. It can be disheartening at times.

But other times, when I’m thinking positively, I thank my lucky stars that I live in a place where fresh fruit and vegetables are available, and at a time when I can rely on the groupsource knowledge of my Australian-trained naturopath who lives in Santiago, the other naturopath I keep mentioning, a Facebook group I found, and other info. I know that I can eat (for example): watercress, fennel, Brussels sprouts, cauliflower, broccoli, loquats, blueberries, squash, zucchini, radishes, cucumbers, and oh my goodness, artichokes.

One of the hardest things in this experience is feeling a separation of self, a before and after. In the before times, I could live on hummus. Now I can tolerate 2 of five ingredients (lemons iffy, no chickpeas, no tahini, olive oil and garlic ok). Before I’d go to a party and pick around what was there considering that I don’t eat meat. Now I have a bag of almonds in my purse at most times. Sometimes apples, too.

So getting back to the artichokes. About three weeks ago, I noticed that a) artichokes are in season and b) Alison Vickery seems to think they are ok, and she has not led me wrong at all on this journey. So I tried them. I bought tiny ones, and at them sparingly, and then with more fervor. And it seems, yes it seems that I can tolerate artichokes. I used to eat artichokes as a child, out of bright yellow bowls at a butcher block table in my family’s kitchen in Brooklyn, with the avocado green sink, stove and fridge, and the tiny, unheated bathroom built as an addition off the house, whose pipes used to freeze every winter. I used to eat them with drawn butter and salt (no butter for now), and later with olive oil, but now I eat them plain, and they are so divine, meaty and messy.

Artichokes are so deep into my soul that I thought I would cry when I realized I could eat them. A friend took a photo of me at La Vega last week posing with some artichokes. They give them to us here with the stems on (unless you want them cut), and part of the stems is edible, so I usually cook part of that, too. Excuse my pallor, I had a cold. 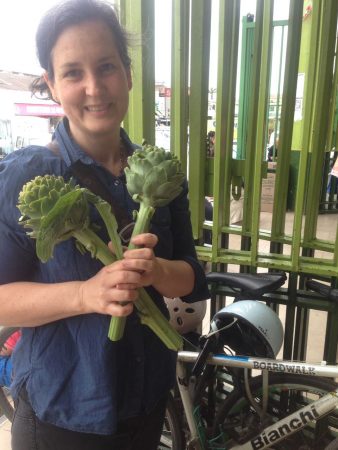 It was on that very same bike that just yesterday, on my way back from the feria, where I bought so much goodness, that I was cycling home. And I had also bought eggs, and was on Erasmo Escala, a street with way too many cobblestones for my liking, and in the interest of keeping my eggs whole, I hopped up on a curb to ride on the nearly-empty sidewalk. A few pedal strokes later, I heard:

Which I thought was the woman’s way of saying I had artichokes hanging out of my pannier. Because of the long stems, they were kind of hard to stuff in the bag, and so at least one of their heads was out. But I turned around just in case, and in fact, one had freed itself, and tumbled to the ground, and the woman was holding it out to me like a flower.

“Me salvaste la alcachofa!”  (you saved my artichoke!) I said, which sounds a lot like alcachofa is standing in for something else. And then I remembered one of the best alcachofa-related expressions in Chilean Spanish, “pegarse el alcachofazo,” literally “hit oneself with an artichoke.” It means to realize something very obvious. So thanks to the woman for pointing out my artichoke lying on the ground, and to the humble artichoke for pointing out that while there’s a bunch of stuff I won’t be eating for now (or ever), there’s still a lot of delicious things to be had. Among them, the artichoke itself.

Also, if you want to know more about my eating these days, or Santiago and places adjacent in general, I humbly suggest you follow my newish instagram account. More photos, less snark! (sometimes). Bearshapedsphere’s instagram, cleverly also called “bearshapedsphere.”