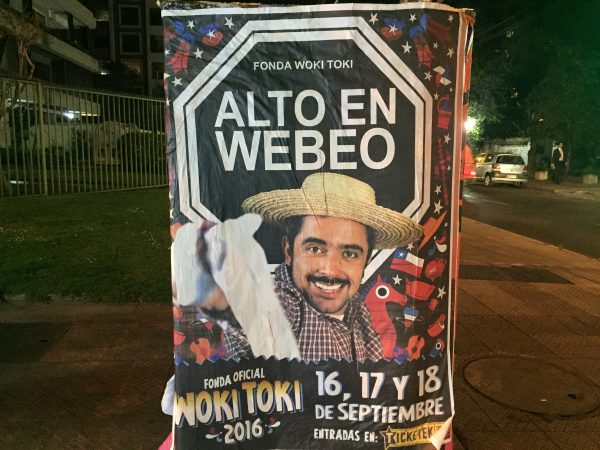 One thing I love about Chile is how readily artists, graphic designers and other creative types take anything that’s happening in news, or in the world, and immediately incorporate it into memes, jokes, videos and GIFs. In the past, there has been the merciless fun made of an ex-president, who mispronounced tsunami as tusunami (click for video including Hammer pants) Or more recently, digitally altered photos showing sharks swimming in flooding caused by a water main break that shut the metro (though the original photos seems “borrowed”).

One periodic good source of inside jokes on Chilean culture, though you kind of have to understand Chilean culture to get them, is the Youtube channel, Woki Toki. We’re getting ready to do the 2017 Census, and they’ve got a video called “42 Census Questions for 2016,” as though the census taker was coming to your door, which does actually happen here. Last time she asked me what my floor was made of. I looked down and said, “wood.” More scintillating details and musings on the 2012 Chilean census here.

In the Woki Toki video I linked to above, the protagonist (played by Koke Santa Ana, also depicted above in the poster, which I’ll explain in a minute), asks questions of supposed census-takees, including, asking them if they eat the whole pot of food when hungry, asking them to interpret different emojis on Facebook (by making faces), and asking which strain of marijuana they prefer, all hat tips to things that are going on here, such as the rising weight of the Chilean populace, the fact that we’re all constantly on social media, and the fact that some possession of marijuana may now go unpenalized (but don’t take my word for it), and that seed and grow and “indoor” shops (that sell the tent-like hothouses used for home cultivation) have become much more popular in the last year.

So, back to the poster. What it is, is the same people as have the Youtube channel I mentioned, hosting a “fonda,” which is a party to celebrate the national holiday of Chile, which is technically the 18th of September, but which always has a military parade the day after, and which can spill fore or aft, depending on which day of the week these days fall on. Generally speaking, the country comes to a halt for about a week, the cueca (national dance) is danced, empanadas are eaten, much alcohol is consumed, and people wobble into work on the next work day complaining of having overindulged.

Which, speaking of overindulgence, and the using of cultural touchstones as spinoffs for artistic interpretation, brings us back to the content of the poster, specifically, the octagonal shape of the seal that reads “alto en webeo.” For one thing, “el webeo” comes from “huevear,” which means roughly, “to screw around.” So they’re saying this event will be alto (high) in goofiness, shenanigans, messing around, etc. While that’s nothing new for the Fiestas Patrias, the shape and wording of the seal has to do with recent Chilean ministry of health guidelines that require those markers, reading “high in sugar,” “high in sodium,” “high in saturated fat,” or “high in calories” to be placed on processed food. It has been one of the most commented-on trends I’ve seen since I’ve been living here, with both pro- and con- opinions flying freely.

Not uncoincidentally, I recently wrote a piece on the Chilean nutrition warning labels for NPR, which is why, together with my love of how creative people here are in taking what’s in the news and making art out of it, I took a photo of the above poster.

Now to find out where the expression “tiki tiki ti,” shouted in connection with the music that goes with the cueca, and the Fiestas Patrias in general comes from. Maybe Woki Toki will read this and educate us all. I’ll keep you posted.