On the meditation of hanging your laundry out to dry. A lesson from Chile 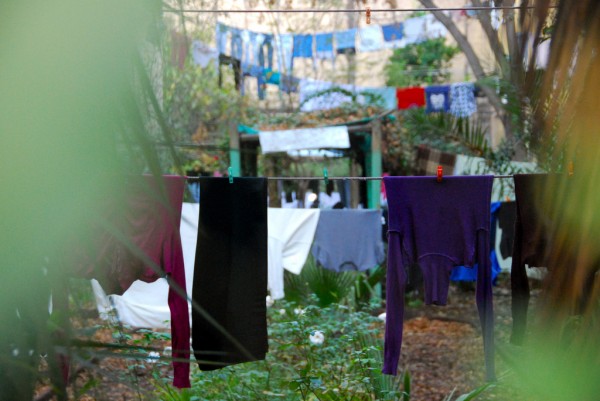 Once upon a time, when I used to live and move around the United States, I spent a weekend at a retreat center on the Oregon Coast. Here I ate vegan food and learned about the word “gift” used as a verb. It was the kind of mellow, wood-paneled place where people spoke in quiet, calm voices that made my chatterbox style seem speedy and irreverent, a zipper where other people had buttons, glidey and modern and devil-may-care, and everyone else was slow and precise.

There was a sign over the sink, where each guest washed his or her dishes after the communal meal, and this sign behooved us to revel in the joy of every act, even simple ones, such as washing dishes. To which I thought, scrub scrub scrub, rinse rinse, I’m outtie.

I wouldn’t say I’ve calmed down that much since then (maybe?), and I certainly still spin quickly enough so that a good friend told me that I have a “high RPM.” I guess just like those thick vinyl Yiddish records from the basement, I’m more like a 78 than a 33. If you don’t know what that means that doesn’t make me feel old, exactly. More nostalgic.

So what does this have to do with laundry?

Laundry is pretty basic in the washing-machine-having world. Put clothes in, detergent, turn on, walk away. In my case I sometimes have to bale out the kitchen sink, which is where the washing machine drains to, but that is neither here nor there. What happens next is what I want to talk about. If you are a dryer-having-person, at this point, you unload your laundry by the armload into the dryer, set it on “go,” and come back to a staticky pile of socks that repel each other and a stubborn woolen one that sticks to a sheet, and a lint trap full of sweet-smelling, pinky grey fuzz.

But I don’t have a dryer. And at first, this seemed idiotic. Hanging each garment, piece by piece, on a clothesline or a drying rack which we call a tendedero, for tender, (ten-DARE), which is how you say hang clothing, though some people use the word colgar, which I think of as meaning from a hook, but in no case do we use ahorcar, which means from a gallows.

Over time, you get used to lots of things, like baling out the kitchen sink, or the fact that even in the lingerie section of the department store, someone is going to try to help you pick out what you’d like, which is weird, because all we really want is a pair of undies that won’t bunch up, and how can a stranger tell you that?

And so it goes with the laundry hanging. I crank up the music, and go out on the balcony, laundry basket pinned to my hip, like Ma on Little House on the Prairie, and hang each garment one-by-one, noting when the nearby neighbors have also done laundry, as if in camaraderie (which I just realized comes from the word comrade), we have all decided to say “we believe that the sun will stay out today.” And there is a gentle breeze, and the clothes sway, and I use that stupid round clippy thing to hang my socks in pairs, careful to keep the unmentionables on the interior side, lest I stoke some roof-walker’s libido, and because it just seems like it’s the done thing.

So great is my love of laundry that I do it on vacation. I bring detergent and a clothesline, and have washed my clothes in many a hotel room sink, from Guatemala to Suriname. I recently developed a non hand-drying-out method of washing small items in a ziplock bag which you fill with water, detergent and clothes, and shake periodically until they are done (TM pending).

When the laundry has been hanging for a while, be it here or there, I start pulling it in, piece by piece, as it dries, folding a few pieces here, and a few pieces there, the periodic clink of half of one of my hastily pulled clothespins landing several floors below in the parking lot. And I realize that when I’m doing my laundry, I’m not doing anything else, and while I’m still sort of multitasking in that I’m listening to music and thinking about a blog entry, it turns out that plaque at the retreat center was right. You can find joy in mundane tasks. So long as it’s not doing the dishes.

Photo: laundry hanging deep in Barrio Brasil. In a yard, which I don’t have. Ergo, it is not my laundry.