Un atado, and the meanings thereof, now with giant kelp! 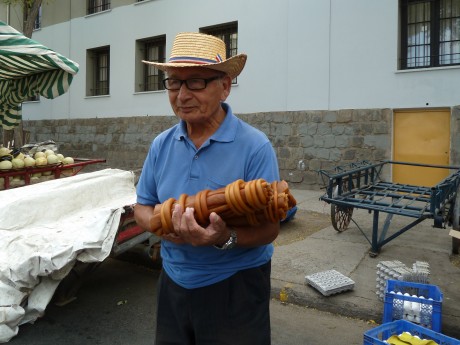 Atar is to tie. An atado should be a thing that is all tied up. And it kind of is. It’s a mess.

But your life is not necessarily all tied, up, it can also be tangled, because apparently, life is a series of strands that should not be desordenadas (which I make feminine because hebra, or strand is feminine).

But something that really does come in strings (strands? loopy ropes?), even though in it’s natural form it looks a bit enredado, is cochayuyo.

Cochayuyo is an arctic kelp that grows along the Pacific coast. On the boat trip I did to Laguna San Rafael, I watched the tendrils wave like Medusa snakes in the water as we bobbed up and down on the former cargo ship-turned tourist attraction. In the San Juan Islands, off the coast of Washington State, I held fast to a similar species while kayaking, watching the curious eyes of a seal who popped his head up not 15 feet from my boat.

But here in Santiago, cochayuyo does not wave and shimmer in the ocean (because we’re not at the coast), and no seals pop up amid its tentacles, ditto.

Here it comes at the supermarket, cut in pieces, or at the market, in cylindrical packets, called “atados.” And I have one, staring at me. Actually, sitting here on my desk beside me, as I research recipes for it. I’ve recently picked up a gig writing a bit about Chilean food, and I’m enjoying it, and I’m not sure if they’d buy a piece on this fishy-smelling seaweed that people give their teething children to gum, and which most Chileans have very un-fond memories of eating as children, but which is supposed to be very good for you. But I am assured that you can make it into a tasty treat, either in a sauce, in charquicán (a stew), or (currently running in first for possible dishes), ceviche. I suppose if you put enough lemon and red onion in it, anything will taste like ceviche. Extra points for boiled sweet potato and giant corn kernels.

But mostly it wasn’t the new gig writing about food that got me. It was the guy pictured above, in his Chilean-colors beribboned not-quite chupalla (a chupalla is a flat-brimmed straw hat worn in the country, but this is closeish), and his old school hipster glasses. How could you resist?

Cochayuyo a mil. And worth every peso, no matter how it tastes. I’ll keep you posted. More reading on cochayuyo here. Photo taken with permission.