More proof that my motherboard was wired in NY, plus a feria report 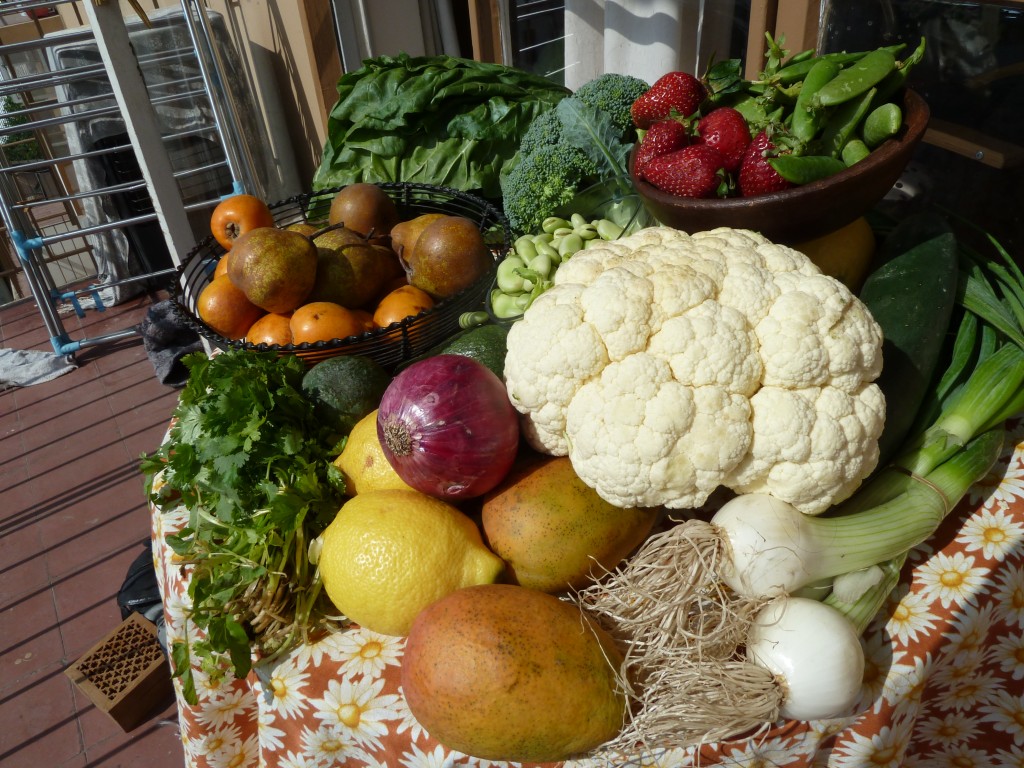 The story of how I changed ferias. By Eileen Smith

In the merciless joy of making fun of how idiosyncratic New Yorkers are, I had a great time when my sister and brother in law moved in together on the Upper West Side of Manhattan. You see, they each moved about two blocks. If I recall correctly, him two blocks south, and her one north and one east (I believe).

No matter. What you need to know about New Yorkers is that with the exception of where they get their hair cut, go to the gym and get their clothes dry-cleaned (does anyone do this any more?), they are very location-specific. Part of this is the fault of the subway. There’s one line that runs up Broadway, and another one that runs up the park, about two streets away. So they trade the IRT (Broadway line, numbers) for the BMT (A/C/E-letters) when they move a block further east, and their whole outlook on life shifts. When they move a block or two, everything changes. Where they buy the paper, where they grab their egg-on-a-bagel sandwich, the corner store, everything.

This always seemed so funny to me, as though each person was staked down with a two-block-radius leash, and for the purposes of neighborhood wandering, that was all the slack they got. Move your location by two blocks, your leash gets staked down there, and then you never return to the old country, even though the old country is just two blocks away. With the exception of hair cuts, dry cleaning, the gym, and, let’s face, it Fairway (a supermarket with a strong following.)

So what does this have to do with the feria, you may ask? What, indeed.

Where I live, there are two ferias that are near me, one on Saturday, and one on Sunday. I discovered them both through the tried-and-true practice of wandering around and seeing where and when people appeared with those useless sheer feria bags, in yellow and blue, that cut into your fingers if there’s anything more than an apple inside. Or ladies lugging carts. You see where they’re coming from, and try to retrace their steps.

Or sometimes you know you’re getting close when you see some roadside carnage. Photo selected to minimize visual impact to readers with sensitive stomachs (or eyes). Like this guy who I saw on the Avda. Brasil bike path (which does an ET-flying requiring maniobra right where it hits Compañía, by jumping from one side of the street to the other, with no warning other than the headlights of oncoming traffic facing right at you). This is about a block from what shall heretofore be called the Saturday Feria. 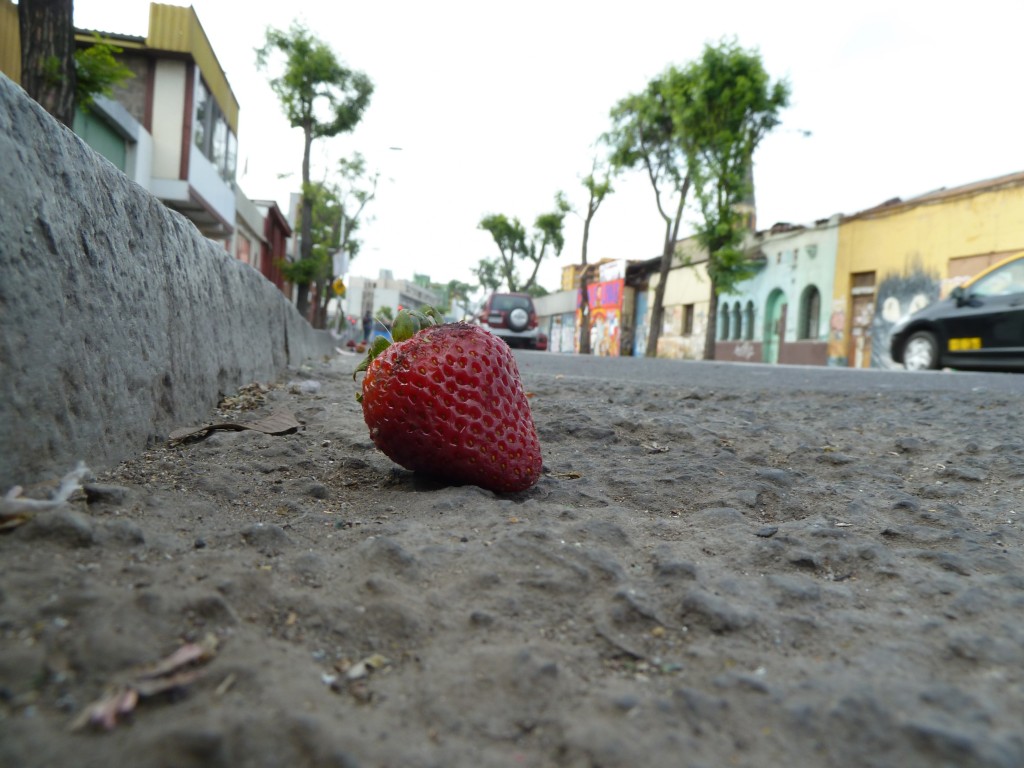 And here’s where I get to make fun of myself a little. Since I moved from Barrio Brasil, I had considered that this feria was no longer mine. You see, I moved a distance of (wait, wait, I’m looking it up on googlemaps as we speak) 900 meters. And 900 meters is far, right? Well, not on a bike. We’re talking a few of minutes, at most. So really, the distance is not a problem. In fact, consider the following (and perhaps my need to quantify these distances). Let depa=apartment and Saturday feria=market that takes place on Saturdays and Sunday feria= market that takes place on Sundays.

So what I discovered, is that the two ferias, taking place just 24 hours apart, and which have mostly the same vendors, and the same vegetables, are equidistant from my house. And the Saturday feria is easier to get to, as there are no cobblestones involved (not so, Ms. Sunday feria), and actually has a bike path most of the way there (See ET maniobra).

But what about the nibbles?

Oh there were strawberries, and nisperos, and pears and two mangos, and scallions and cauliflower and broccoli (but el brócoli, not la), and lettuce and two avocados (not hass, another variety that is more buttery, that is called “cremosa” at the market), and cilantro and fresh shelled fava beans, and lemons, and peas, and tomatoes and scallions and cucumbers and red onion (to be pickled together in an easy vinegar-sugar-salt-dill marinade). And they were mostly cheap, strawberries are down to 700 a kilo (about $1.30), but nisperos are still expensive (500 a quarter!), and I’m still not convinced about the cherries, and the tiny melons? why bother.

And I went really early because I was already awake, and got to get there for many first sales of the day, often greeted with a “primera venta” (first sale), and sometimes a quick thanks to God (eyes upward, hands clasped) for starting the day well. Plus I got to see the cabbage getting unloaded. No cabbages were harmed in the process. 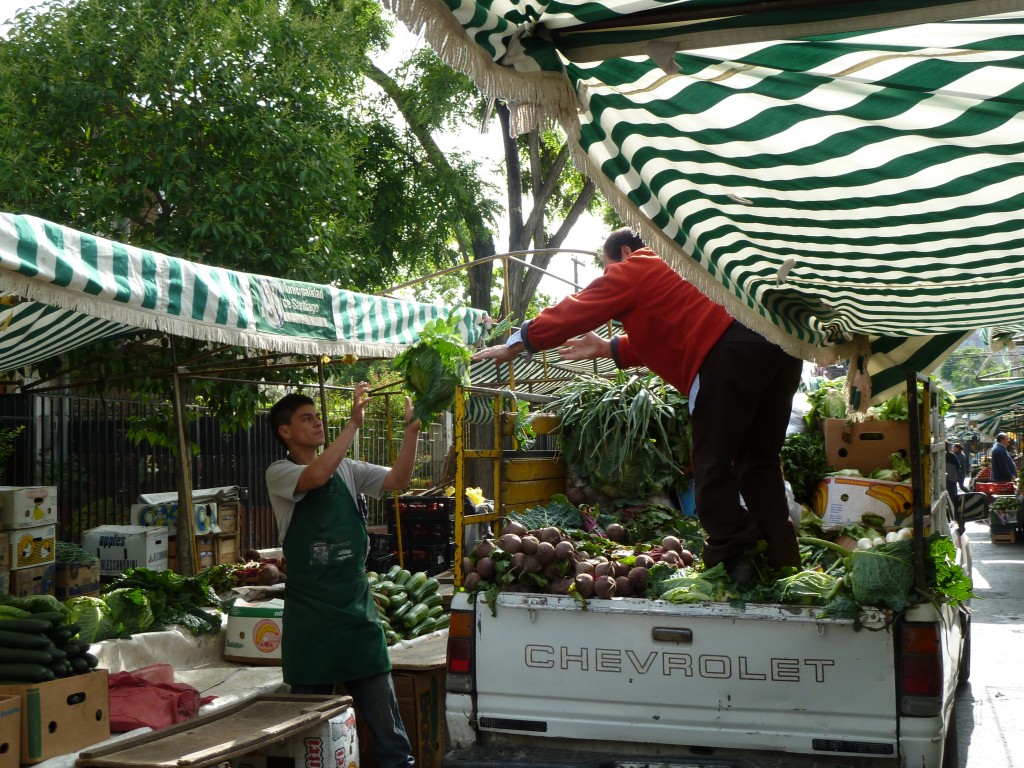 And the spaces seemed vast, and the produce orderly, and people took the time to chat a bit, in between sips of their morning tea (which one woman was dunking animal crackers into). 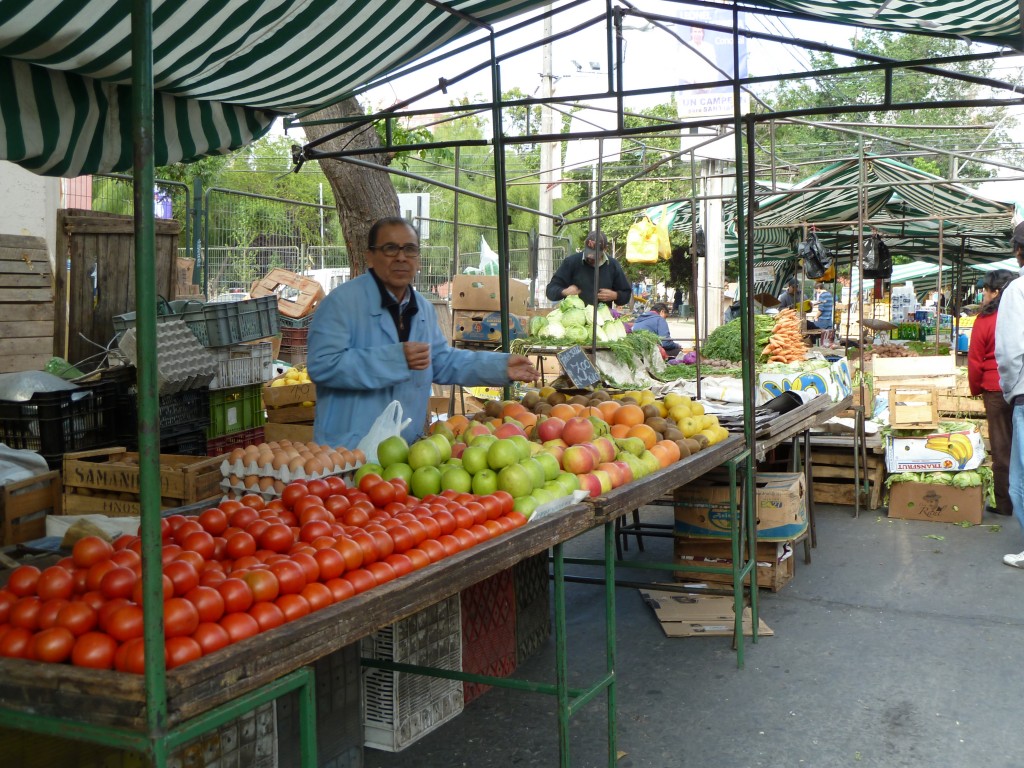 And on the way back, I couldn’t help but notice that the jacarandas are blooming (these, together with aromos (a kind of mimosa) and the cherry/plum blossoms really bring spring into focus for me) 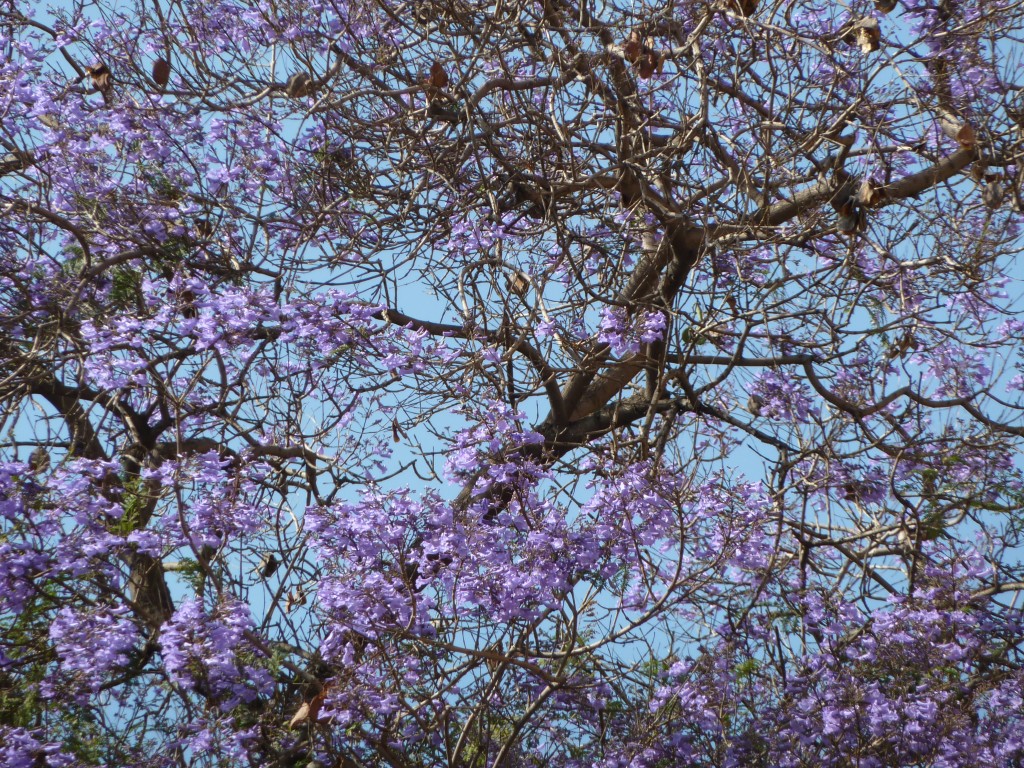 And that you get a nice view of what I like to call the “Disneyland church” (no offense meant to adherents, it’s just so festively-painted). 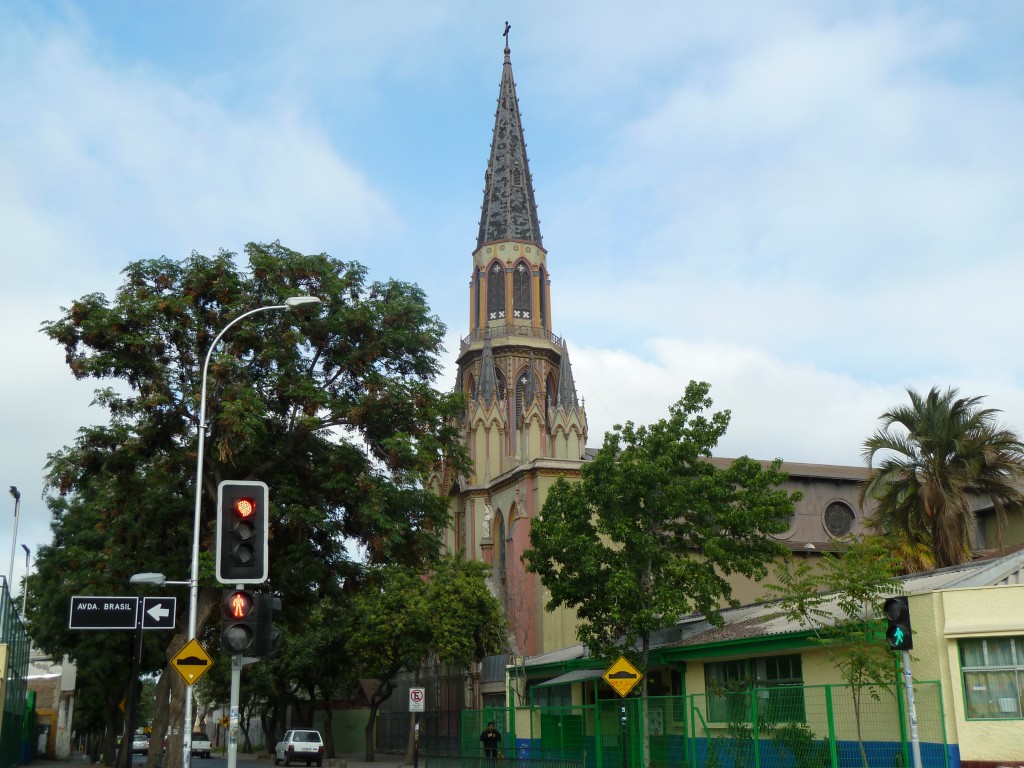 And so I don’t know if that means that I’m subverting the dominant paradigm (thank you, liberal arts education), by breaking free of my New York tendency to see everything as different when I move a few blocks, or if I just figured out that if I have time on a Saturday, and a desire for fresh produce, Saturday Feria is where it’s at.

For the record, getting to the feria “early” means about 8:45 or 9:00. Striped awning installation was still in progress.