I sneaked out to Colombia for a minute, don’t mind me 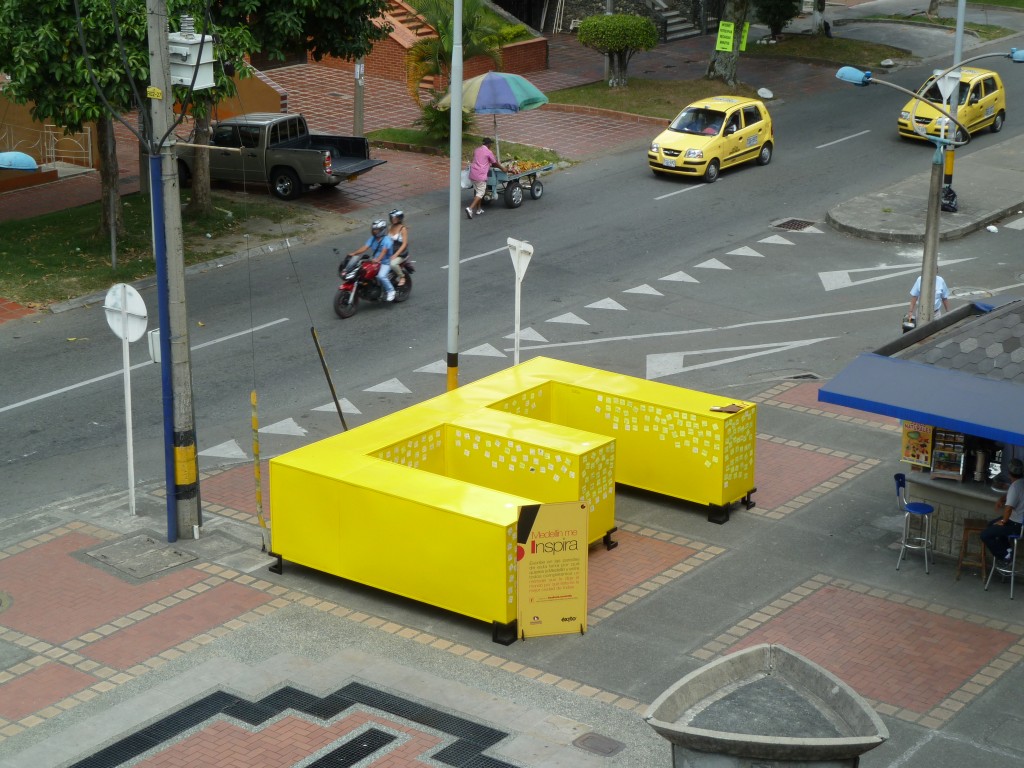 I have been in two places at once, or actually four places at once this last month. According to my blog, I’m in Chile, Santiago or La Serena or somewhere else. But in actual fact, I was a few thousand km away, first in Medellín, and then in Bogotá, and then visiting family. I don’t know why I did that (the subterfuge). I don’t think there’s anyone who’s terribly interested in knowing when I’m not here so they can come into my apartment and clean, or restart my internet so that the backup I left backing up all that time I would gone would actually back up (did you get that?). But I posted about places I was not. As I was far away.

Far away! I met up with my good friend R, who used to live in Chile, but now runs the show at a library outside of Chicago. She is hilarious and deadpan, a super traveling companion and cautious enough to keep me safer than I probably would be on my own, but not freaked out about normal Latin American stuff. A total win. Also, the laughing, so much fun for the abs. As was the sneezing, due to the great greenness and warmth of Medellín. 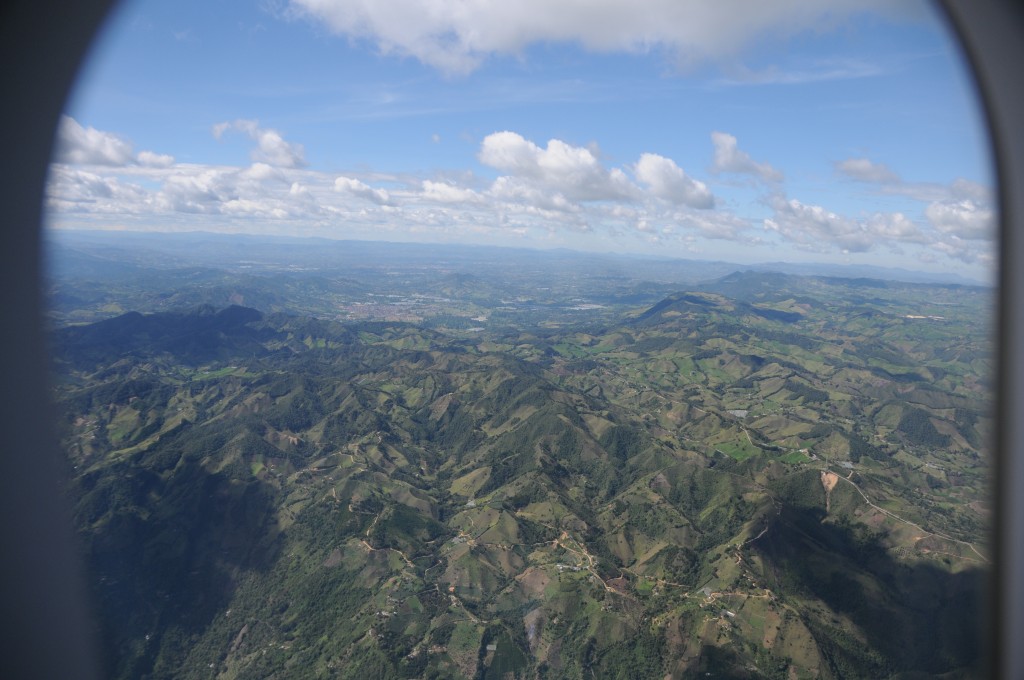 We and/or I had a couple of mishaps that bear talking about. None of these things led to great badness, but they had the potential for stress, discomfort, gastric distress and a whole lot of whatnot.

1. (and this is the most important one). There are TWO different airports (or terminals, but they call them airports) at the Bogotá airport. If you are (for example) meeting a friend who is also flying in from Medellín at the same time, be very clear about where you’re going to meet. Otherwise you will spend all your time taking busses inside the airport and outside the airport in a giant, misguided circle, that feels a little like those penguins that bob up those stairs and then slide down that stupid track, but never get anywhere. Eventually you will meet up at the hostel, frustrated and tired, and not a bit queasy from all the circles. Word to the wise. Avianca domestic flies into the aeropuente, not the regular airport. It takes 18 minutes to take the bus on the outside of the airport to get to where LAN cleverly flies into. Meanwhile, your friend will also be on the penguin stairs/track/bus. You will never meet at the airport. Never. OY.

2. BRING PANTS. I’m all, lalala, I’m going to the northern hemisphere. I shall pack a lovely assortment of teeshirts and shorts, skirts, and one pair of pantalón pescador (clamdiggers, or as you know them, capris). With this I shall be happy and graceful and plenty warm, because look, the temps in Medellín are “springlike” (actually, quite summerlike, necessitating some in-room laundering, which I have an irrational love for). What I did not discover, until I discovered it in a very shivering way, is that it is COLD in Bogotá. Moreso when it rains. Something about mountains and whatnot. Go figure.

3. The water is potable, and where there is potable water, I will eat off the street. That has served me well in Suriname (where I had no choice at times), and other places, and so I did, and will. There was this one moment when I was munching into a piece of pineapple I’d bought on the street in what we in Chile would call a población (sort of favela-like) and I heard one kid tell another “no class today.” I’m nosy, so I said, “why not?” and he said, “water’s out.” And I thought, gee, this pineapple tastes delicious. I wonder how the person who cut it was able to wash their hands beforehand. I kept eating, for what it’s worth, and felt fine. Total number of slices of pineapple, bags of mango sweet and spicy, and other fruit eaten from the street: very, very many).

4. There are simply not enough almojábanas (oily fluffy corny salty baked pastry) served in meals. They show up occasionally, like on a platter that accompanied the very worst hot chocolate I’ve ever eaten in my life, which was served (the cocoa) with a hunk of cheese meant to be plopped into the cocoa in pieces, or dipped in later. This cheese I referred to as cheese-flavored gum. In addition to the velveeta bubble yum, the cocoa was also served with a buttered hotdog bun. In all, a vile experience. But the almojábanas, they were delicious. And I sought them out at every turn, but they were not always available, which is sad.

5. The dance to get out of the airport in Bogotá is considerable. You have to go get a piece of paper, which is written with your name on it, and is all official like. It means you are exempt from tax (a departure tax, I believe). You get the piece of paper at an office which was right opposite where I was supposed to stand on line, and one of the American Airlines dudes told me. Hopefully he will tell you, too. Then, even if you don’t have luggage (and I was the only person without luggage, and someone else asked me to take some of theirs and I did not), you have to go to the luggage dropoff at your airline to drop off this piece of paper. Which makes me think they should call it the luggage and paper dropoff, but no one asked me.

6. If ever your travel agent books you on two consecutive tickets on the same itinerary (or in my case, three consecutive tickets on the same itinerary), and two of them are not part of the same alliance (which makes me think we’re all on the show Alias, in which case, I hope I get the blue wig), the chances of you getting your luggage when you arrive, somewhat worse for wear, to the Santiago airport at 5:30 in the morning, are slim. Further events that may impede your luggage’s arrival including circling for 45 minutes near the Miami airport and waiting for a storm to clear, having to land and refuel at Fort Lauderdale, and then fly back to Miami, whereupon you must bound like a cheetah to your next flight, which luckily is leaving 45 minutes late, but unluckily for you, that also means it is arriving to Bogotá late, and when you get to Bogotá with 25 minutes before your plane takes off, and run through the maze they have set up for you (no cheese, gum-like or other at the end) and finally arrive to gate 1B, where they will hand-write a boarding pass for you, which you will then get yelled at for by the person who takes it, and a woman who really was too ill to be at work (I suspect H1N1) will inform you that your luggage simply will not be where you are going when you get there. Unfortunately, there are no bonus points for sitting next to a man with the broadest shoulders in the known world, and who really likes (no, really really likes) to drink dark rum. Cramped! Stinky!

7. Despite the aforementioned, and the worst telephone connection I have experienced in the last decade, with the “luggage irregularity” department of Avianca, your luggage will (or may, mine did) arrive, completely unscathed and unopened, a mere 29 hours after you did, and without you having to schlep it anywhere.

Also, my cactus was so happy to see me when I got home that it did this. I didn’t even know it could bloom. I guess like me, it really likes to be alone. 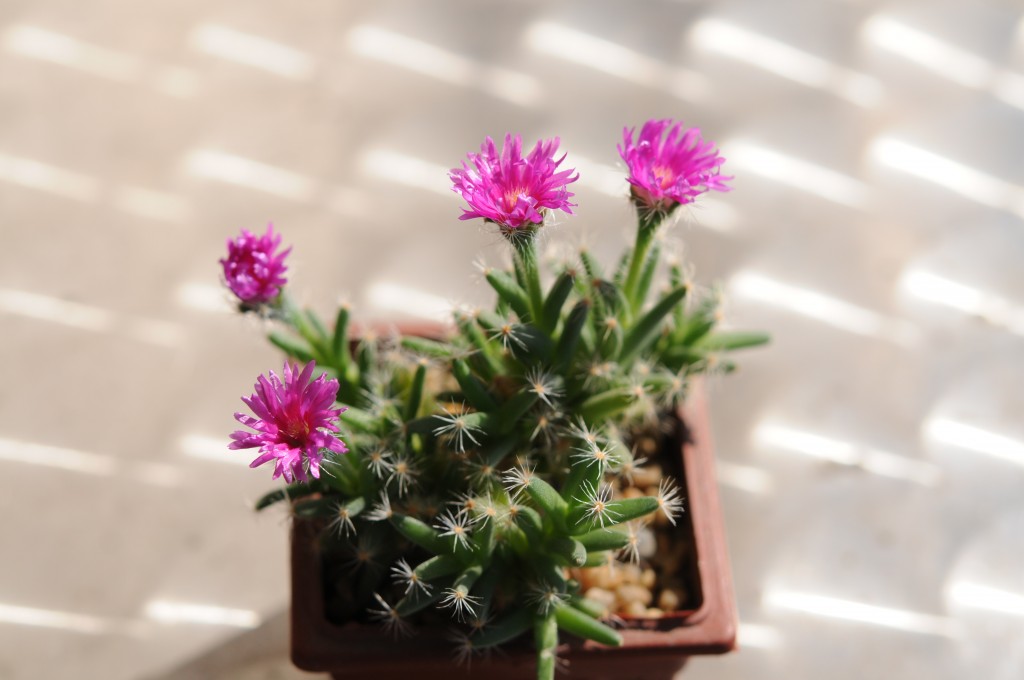 More on all of these adventures in the coming days. I’m still busy dancing around my apartment with all my exciting loot. Like lined index cards. I know how to go big.