In search of the pretty in Pomaire

Pomaire is a town nearby Santiago, that most long-term Santiaguinos have either been to willingly, or dragged to by some tchotchke-loving aunt, or in-search-of-a-giant-empanada nephew. Even I’ve been several times already.

It’s a town that makes its living by selling terra cotta (greda) items, from small olive and pebre pocillos (tiny bowls), to fuentes (vessels, in this case I mean large square handled pans) for casserole-type items, and amphoras so big you could place a yappy dog inside (which I do not condone), and flower pots, and windchimes and and and.

It just goes on and on. Almost everyone you know (if you live here), will have at least some of the following on hand. I present to you the usual purchases at Pomaire. 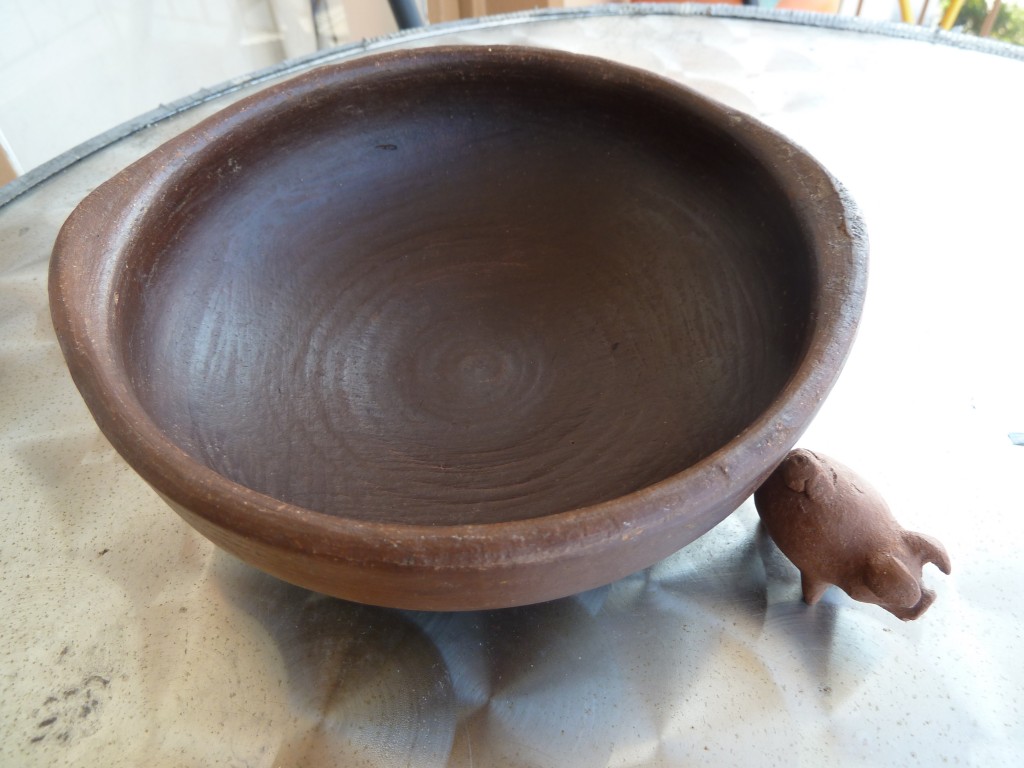 A bowl great for porotos granados (a potage of white beans, squash, fresh ground corn and basil), or pastel de choclo (kind of like a shepherd’s pie, with grated corn on top) or pastel de jaiba which is a heart attack in a bowl with crab inside (cream, butter, cheese, who knows what else, but delicious) or what have you. The bowl makes a lovely sound as you scrape your spoon against the bottom, and the soup or whatever stays warm. Beside it is a three-legged lucky pig (chanchito de la suerte). I have no idea why this brings luck, as lacking a leg doesn’t seem particularly lucky, but people love these, buy them for far-away friends, and in my case, give them as recuerdos (little gifts) from a wedding at which I also pulled a ribbon from a cake and got a pacifier. So I’m saying, don’t believe everything you hear.

But on a recent trip to Pomaire, Abby and I were not just on a mission for your run-of-the-potter’s-wheel (sorry) greda, we were into it for some more interesting items. Specifically, she wanted to pick up some pigs (but made by artisans, none of these cut-rate pigs, I’m telling you), and a glazed bowl.

And so off we went. Freezing cold day, two gringas at San Borja, and everyone saying, “Pomaire? Pomaire?” and so it was. A drop off at the front side of town and some perusing, but we didn’t find anything interesting. So we continued back, to the part where no one is hawking lunch, and there are dogs, and houses with chimney smoke and dripping plants and people who don’t know if they should put up their umbrellas or just leave them down, and so they carry them like spears, as though they’re ready to joust with whoever comes along.

And these. Similar to the greda bowl shown up above, but of superior quality, smoother, and also, pretty. See? square. I had modeled one before with my lunch in it, if you’d like to see it in action. 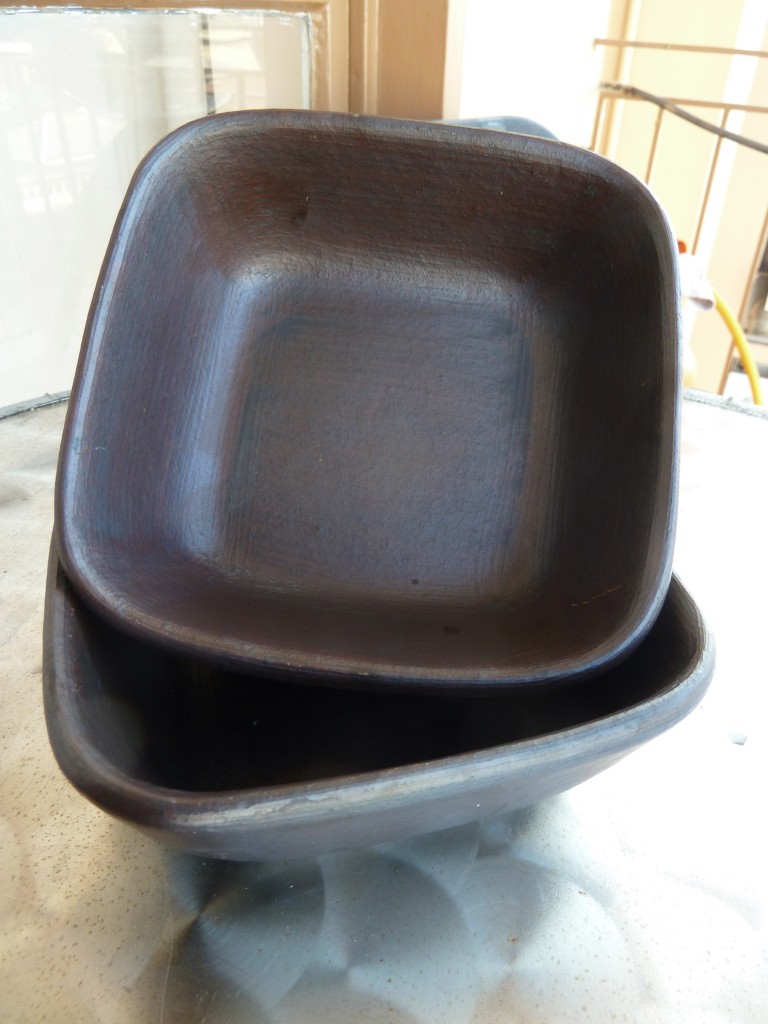 Here, Juana González (one of the owners) helped us, and was generally lovely and warm and explained how further into the town you meet the actual artisans, and not just people who buy and sell in bulk. She demonstrated how she makes tiny pots and such that you’d use for decoration, with the bowl exactly the same size as her fingertip.

A little later, frustrated because the glazed greda place didn’t seem to be where we both remembered it, I finally asked someone who was selling melted glass (vidrio fusionado) ornaments if she knew where the store was. And she did.

And then I bought this: 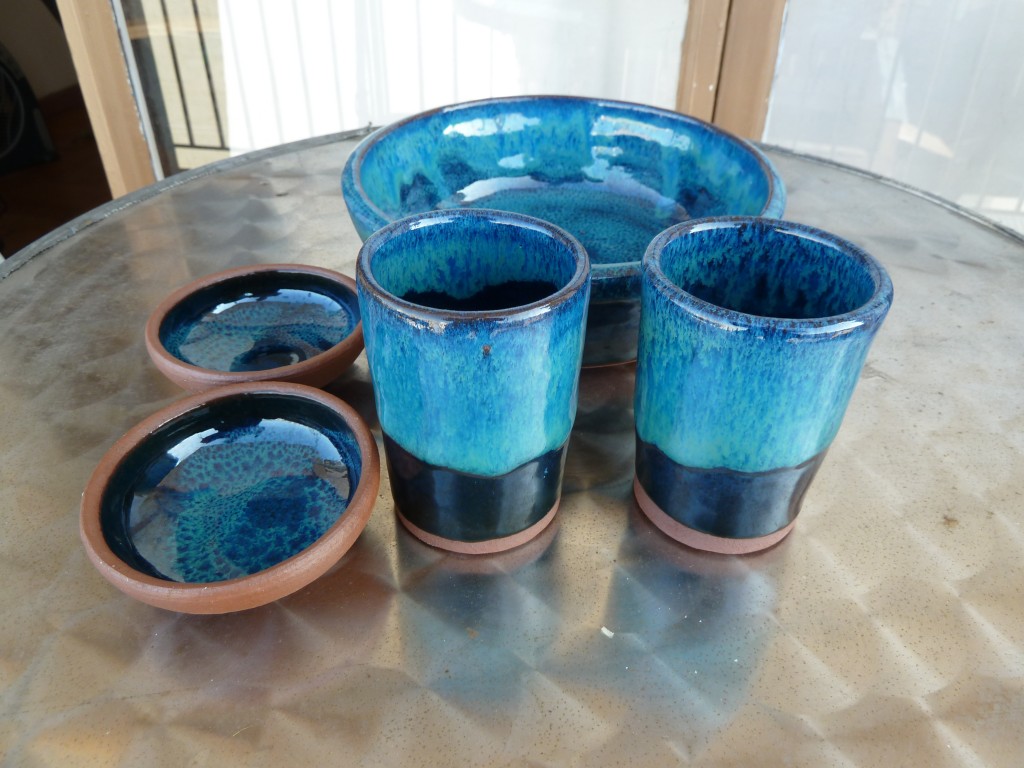 Which I adore, and I have eaten my lunch out of the large bowl a few times, but it turns out peanut noodles aren’t that photogenic, so no snaps of that one.

And then we hitched a ride in a panel van to Melipilla with a man who smelled like he’d eaten and bathed in cigarettes (don’t try this at home!), and caught the bus back to Santiago, and nary a breakable was broken. And it was good.

Details: Pomaire, from San Borja. Buses back to Santiago don’t leave until 5 PM, thus the backtracking to Melipilla. You can take a bus, a colectivo, or, unsmartly, a ride from a stranger in a panel van (like the yappy dog, I do not condone this).

Glazed items: Greda Vitrificada, Hugo Escalante, just past the chapel/Mary on the left side as you are coming into town. If you miss it, ask for Hugo or the Greda Vitrificada (though I asked for greda esmaltada and that worked just as well). Total collection purchased, 6,500 CLP, about thirteen dollars.