On the ground protesting with Patagonia Sin Represas 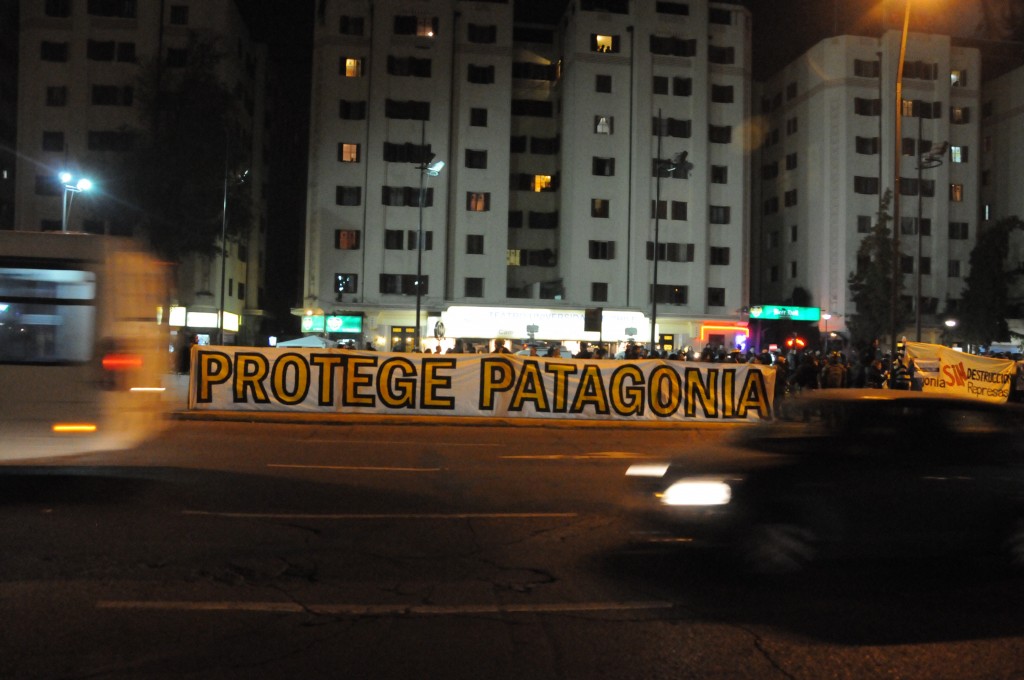 On Monday night while many of you were snug in front of your televisions, your computers, your latest issue of whatever magazine you can get there and I can’t get here, I was listening to the sound of shoe soles slapping the ground on the tiny side street of Juana de Lestonac in Parque Bustamante. The sirens would advance, and the slappity slap against the cobblestones would grow louder. As the sirens backed off, I could hear people catching their breath, and watch as the puff of teargas left behind lingered in the air. We all hoped for no breeze.

Tear gas smells like many things. It’s sort of somewhere between lemon-pepper skunk and burning rubber. My first reaction is to sneeze, followed by a burning throat. In the worst of all cases, I am chokingly, eye-streamingly, blind. It feels like a fine glass dust has been trapped between my eyes and eyelids, and like a giant, filthy feather duster got caught in my throat. I cough and sputter. My lips burn.

Tear gas (and the police in general) is what people were running away from on Monday night in Santiago, near Plaza Italia, the country’s flashpoint for anything exciting. When Gonzalez and Massú won the Olympic gold medal for tennis, people went to Plaza Italia to celebrate. Win or lose, for sports, after a big game, presidential election, everyone goes.

And then there was Monday. On Monday there was an important vote in the south of Chile, which approved HidroAysén, a hydroelectric dam project which would obstruct the flow of the most voluminous river in Chile, and place a giant set of electric towers across the clean, clear sky of one of Chile’s greatest treasures, Patagonia. The dam project would cost more than 7 billion US, and stretch electrical wires across 2300 km of untouched land, much of it through parks, wetlands and nature reserves. Sixty one percent of Chileans oppose the dam project. And eleven out of the twelve committee members supported it.

I went to the demonstrations, both in support of the Patagonia Sin Represas (Patagonia without dams) and to take pictures. I talk a little about the happenings in this article I published over at MatadorNetwork.

But what I didn’t tell you is that we were peacefully chanting, talking, shouting. We were a few thousand strong. The police drove a series of buses to block protest signs from Avda. Providencia, a major conduit to the east. And then the crowd pressed forward, as though it would take over the Alameda (the same street, but here heading down to the west). And the guanaco came into action, shooting water into the crowd, followed by teargas, which hangs white and puffy in the sky as it sinks and dissapates to burn your throat, your eyes, your lips.

And people ran. They ran to the south, along Vicuña McKenna, and one block further east, along Parque Bustamante. Spilling through the streets in a panic, hand in hand. Panting with the effort and pulling scarves over their faces. Sharing lemons, which quiet the burn in your throat. Running, stopping, listening for sirens. I imagined a situation in which this was real, in which two blocks away people weren’t quietly drinking a beer in Barrio Bellavista. A situation in which there were curfews, a fear that curls around the back of your skull, rendering you permanently tense.

The police were not just dispersing the crowds from Plaza Italia, they were actively pursuing all groups of more than about 25 people, chasing them down with water and tear gas. And I decided I’d had enough. I’m not cut out for conflict, and I’m lucky enough to have a choice. So I started biking down Bilbao, where there’s a bike path, and I noticed that the car traffic was moving very slowly. I ran into a group of protesters who were taking over the street, snarling traffic and chanting their opposition to the project. “Colbún, Endesa, la misma empresa. Están en Patagonía dejando la cagá” (Colbún, Endesa, the same company, they’re in Patagonia screwing things up.”

I biked along with the group for a few minutes, and then did some quick calculations, figuring that a zorillo (that’s the vehicle that shoots the tear gas) could easily take the parallel street and gas the protesters square in the face. On my bike I would be hard pressed to turn around and get out of range, and would be likely to get in the protesters’ way as well, so I decided to go over one street to bike home. And not three minutes later, I heard the grinding sound of the powerful military vehicle, plus its siren first behind me, then in front, zooming down Marín to try to cut off the protest group, who were on their way to La Moneda (the presidential palace), a few blocks from my house.

I came home then, to drink some tea to soothe my throat, and write up the official report of the vote and protest for Matador. And wonder just what this surveillance helicopter was looking for, and being thankful it wasn’t me. 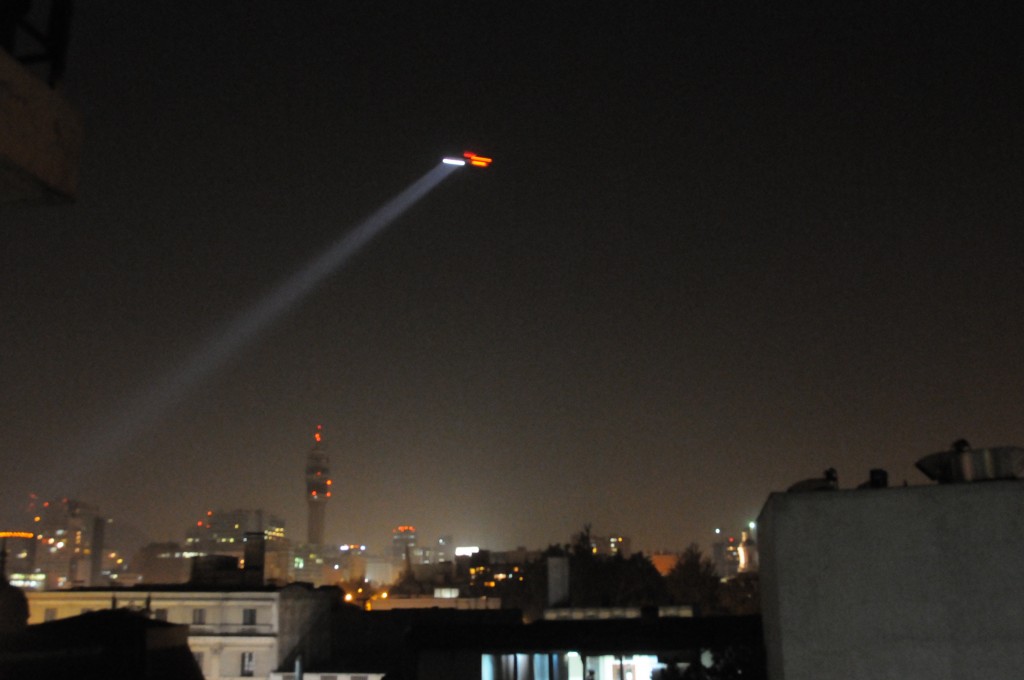 Note: a follow-up protest is planned for 6 PM on Friday night. Packing list suggestions include a lemon cut in half or wedges, a face scarf and good running shoes.

Edited to add: For eleven disgusting facts about the massive dam project, read this article on MatadorNetwork.