What’s in a feria? The Valdivia feria report

On a recent trip I took to research two different stories, one short and one long, I knew that one of my hotspots would be the diminutive feria fluvial or riverside market in Valdivia. Valdivia is lucky enough, or smart enough or pretty enough (not sure which) to be run through or passed by by a river, which is plied by boats taking you hither and yon, and also sea lions, which occasionally tumble like clumsy ferrets out of the water and then lie about yawning and barking and howling and paying only minimal attention to the signs behind them that say “lobos marinos animals mordedores mantenga su distancia,” or “sea lions biting animals keep your distance.” The people also pay minimal attention to said signs. 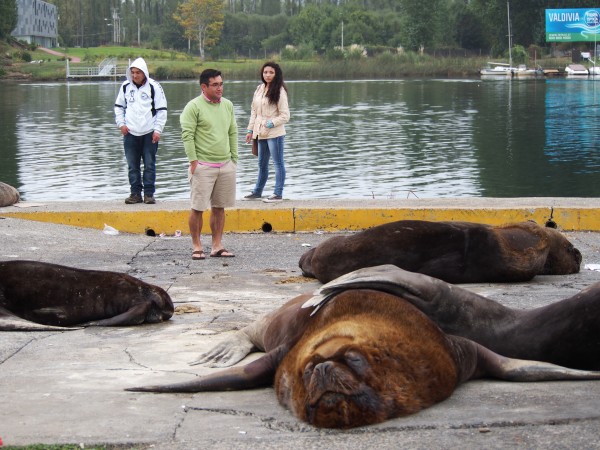 But not me, I took this with a zoom lens. Ever since the last dog bite, I stay away from semi-wild animals, rabies shot be darned. 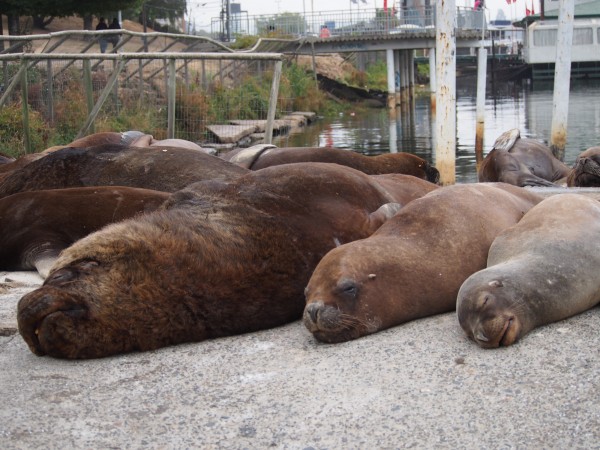 The sea lions are here because they want fish guts, like the ones that can be thrown to them from the riverside market, by fishmongers who are processing fish for customers walking by. 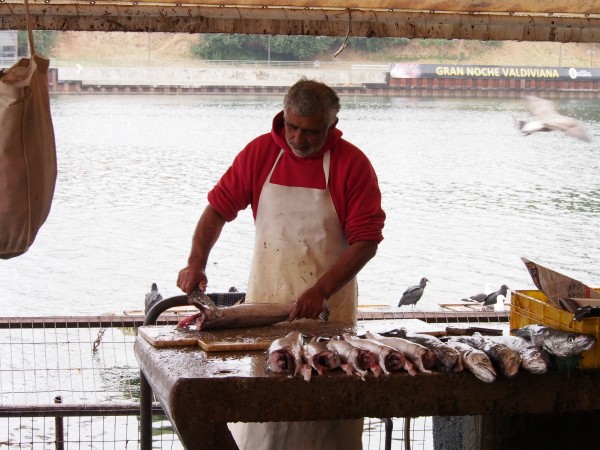 I never talk about the fish or seafood available at the market in Chile because I don’t generally buy or cook either, but it was notable that the selection here was good, and inexpensive, and occasionally doused with water by their sellers. 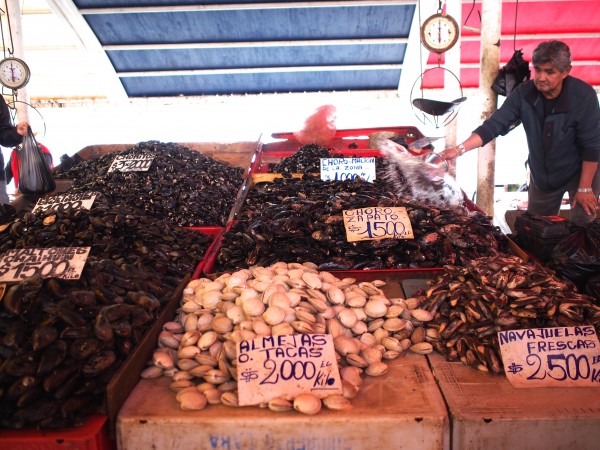 Also on offer, rounds of cheese, a lot of elephant garlic, which we call ajo chilote, though I have no way of knowing if these actual garlic cloves were grown in Chile. People often make a spreadable mild garlicky paste out of this garlic, and in fact, I have never seen it prepared or eaten any other way, though I’m sure you could experiment if you could get your hands on some. 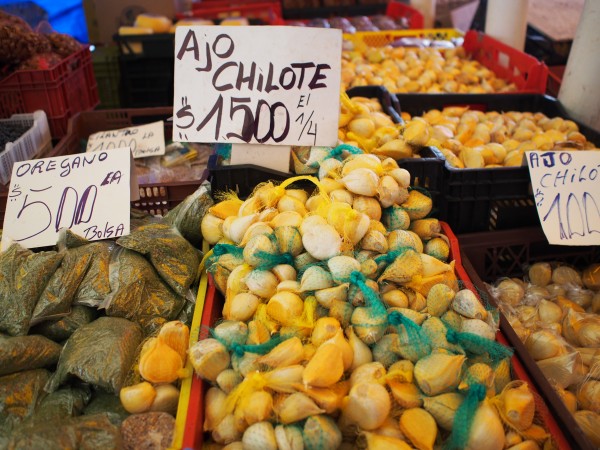 And there was ulte, which is the part that holds cochayuyo onto the rocks, where all those words mean something about seaweed, though ulte is the meatier of the bits. I have eaten this a couple of times, once in a fancy resto in Puerto Montt (believe it or not), where it was very tasty. In this area it is also called lunfo, thus the sign, that says ultes o lunfo. 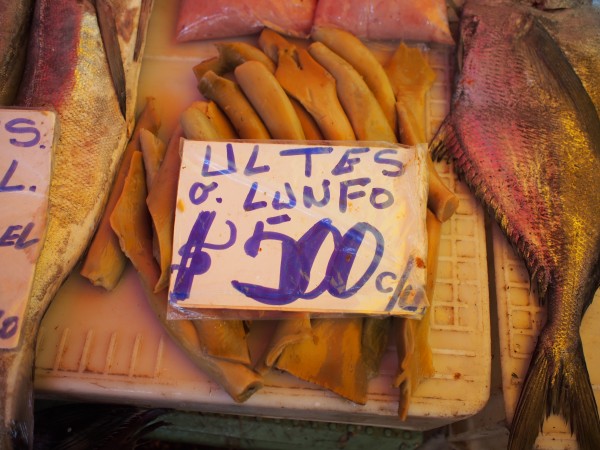 No walk down the Chilean seafood lane would be complete without piures, or red sea squirts. The first time I ate one, I thought to myself, “I have just eaten the caleta,” where the caleta is the fishing cove, and all the smells that go with it. Here they are in a bag. 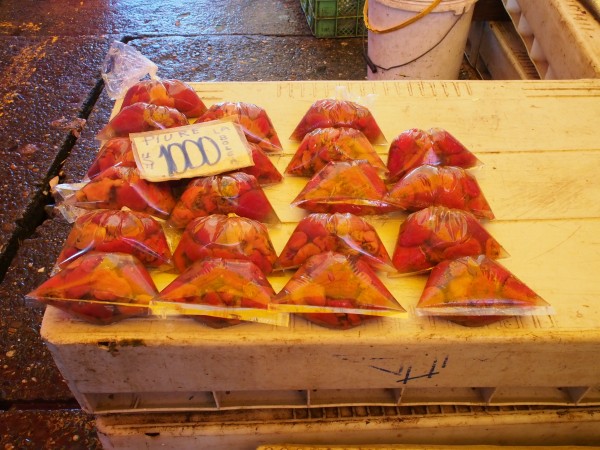 and dried, hanging. People say they have great medicinal powers, but they are very high in iodine, and taste (if you ask me), like they are trying to kill you. 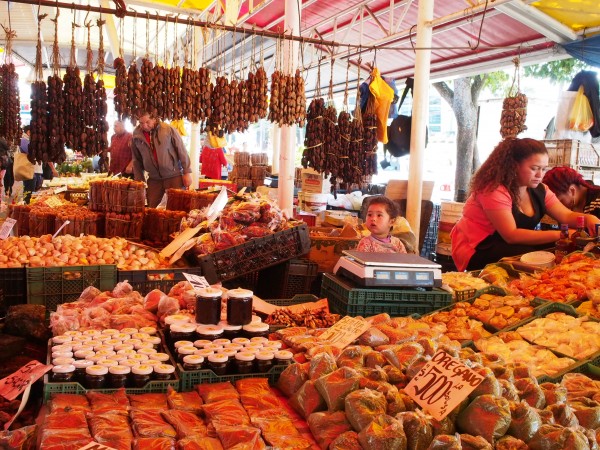 And there were these items, which you might confuse for some vegetarian form of lobster claws if you didn’t know differently. 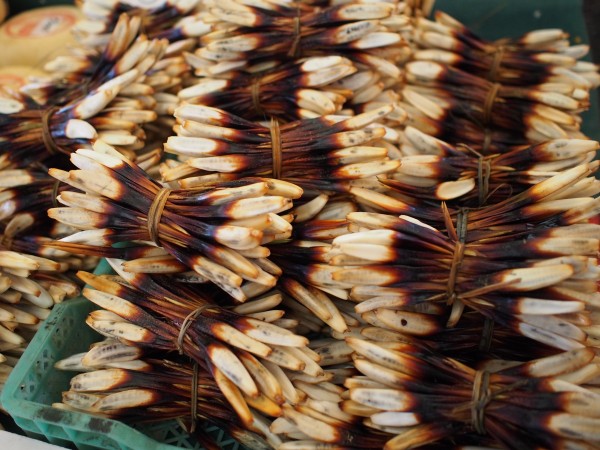 But they are actually chupones, or an edible part of the Greigia Sphaecelata, a crazy, wild-haired looking plant, which the forager who sold them to me told me, these pieces must be wrested from the plant with pliers, but this does not kill the plant. You bite off a fleshy white bit at the end, and suck (thus the name) the sweet flesh and juice out, getting many, many seeds in your mouth, which you spit out. The juice is clear, and the flesh is creamy-looking, but the taste is Welsh’s Grape Juice, as far as I’m concerned. Very tasty. Only the third time I’ve ever had them, and this was the closest to the source, and the best. I am currently drying the seeds on my windowsill, and recently offered them to my followers on Twitter (@bearshapedspher). I have no idea if they will grow in Santiago or nearby, as they need a lot of shade and water, but might be a neat experiment. They are in the bromeliad family, like the puya (chagual). which believe it or not, I have written about not once, but twice. Because they are so beautiful, how could you not.

Much of the time I was in Valdivia, it was a bit overcast, and then suddenly, it wasn’t. As though the sea lions and river and chupones and all the other cool stuff there was to look at and talk about weren’t enough, the world started looking like this. The low building in the foreground is the market. 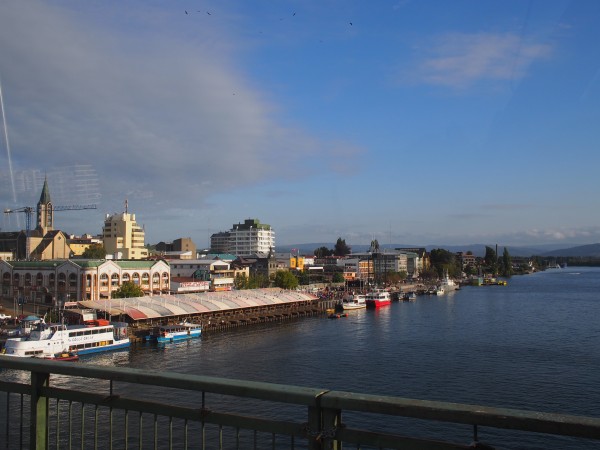 I have a new urban crush. Which is surprising, because the last time I was in Valdivia, it was raining so hard, I woke up thinking “they have a train here?” They do not have a train. But sometimes they have horizontal rain so hard you have to change hasta los churrines (even your undies) when you get where you’re going. So be warned, and pack Gore-Tex, or your local equivalent.