Revisiting Managua, a market, a church, sunshine, and some hibiscus tea 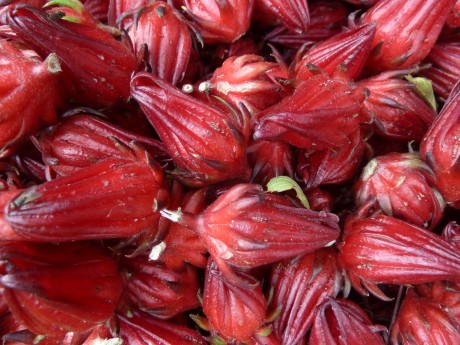 Above, fresh hibiscus flowers. Their dried cousins, brewed as tea, cured what ailed me re: resfrío (cold).

Managua was important to me. For years, it was the capital city in Latin America that caused me the most discomfort. I remember arriving there in 1993, and feeling like I couldn’t get my brain around it. There were insistent people, shoving us into Soviet-style Lada taxis, which we joked were called that for their similarity to latas (cans). There was no discernible downtown, no tall buildings. There was sprawl, and small homes, and sprawling small homes. On one occasion, I went with a Canadian guy I’d met, to help broker him delivering a sum of money to a family that lived in a neighborhood that was off the grid, in the sense that there appeared, to this grid-city dweller, to be no order to where the houses were placed. We eventually found where we were supposed to go, a house behind a tall, freestanding, square set of bars, that made it look like we were entering a cage when we walked in.

The family was not expecting us, and still managed to pull out a cake and coca cola to celebrate our arrival. I explained in terrible Spanish who we were, and why we were there, to deliver the sum of money from a previous homestay guest they’d had, who was friends with the Canadian. Eventually, when it was time for us to leave, the teenaged sons walked us out of the twisty-turny neighborhood, which I am trying so hard not to call a slum because it sounds judgemental. They walked us past what can only be called a makeshift dump, and over a drainage canal on a series of planks, and later to the outskirts of the Huembes market, a giant city-within-a-noncity, where we’d been just the day before, where, before we’d even finished our meals, children approached with clear plastic bags to ask if they could take our leftovers. I had eaten stewed string beans and a couple of other wet vegetable items, and these leftovers, along with the Canadians’ (there were a few of them) chicken bones, were tossed into a bag, and the kids went away. When more kids came with more plastic bags, I only had to point to explain that I didn’t have any more leftovers to give, my plate having already been scraped clean.

You wouldn’t think I’d want to return to a city like the one I just described. But in addition to the fact that I wanted to go to the Corn Islands, which are accessed from Managua (or Bluefields, but Managua is easier to get to), there were reasons I wanted to go to Managua. I wanted to rewire my definition of the city, with many years of living in Latin America, redefine it. See it as not-hostile.

And here’s how it went.

I arrived at my hostel, in the shadow of a large mall, where I went to the grocery store to buy vegetables and refried beans in a foil pouch, as well as a piece of salty, crumbly cheese. This was dinner.

The next morning I got up to go the Huembes market, and when I asked a security guard at a local school which direction to go to get there, he asked if I wanted to take the public bus or a taxi. It hadn’t occurred to me that I could take a bus, since taxis are cheap in Nicaragua, and it is generally accepted that that’s how foreigners get around. But my interest was piqued, and I decided to take the bus.

Before getting on, I quizzed some young women about where they were going, and if they were getting off before or after the market. It turned out that they were getting off at the market, as well, so I invited myself to follow them. And I did. They were at the market to buy candy to fill one woman’s child’s birthday piñata, and we went from stall to stall checking on prices. They were still dithering over which giant bag to buy for (about $10 US), when I decided I’d had enough piñata-filling, thanked them for their help, and peeled off.

Strangely, they never asked me where I was from. This was later explained to me as “Nicaraguans don’t travel much, so they might think you’re from another part of Nicaragua.” This is hard for me to believe, but similarly strange things happened a number of times, and once, in line to buy a long-distance bus ticket, I was asked if I had dual Nicaraguan-something citizenship, so maybe if you’re in Nicaragua and you speak Spanish, people just think you’re from there. The other option is that people were certain that I was Spanish, so didn’t bother to ask. Several times this was posited, (where we assume that white skin plus strong j sound, plus hoarse voice from a cold equal being from Spain). Or maybe they didn’t ask because they just didn’t care.

No longer limited to the piñata and candy section, I wandered. Through piles of string, and wooden crafts, and then to where the guy washed corn and made a sticky, pale-yellow dough, and the ladies scooped it out and patted it into tortillas, the smell smoky and corny and green and then past stalls where people were rearranging dripping meat, a vast proportion of which seemed to be livers, all of which smelled metallic to me. Later, past different kinds of fruit, and a store playing a Spanish version (I think) of Gagnam Style, selling sneakers and sporty clothes, and then more fruit, and then more toys, and less meat (this I did on purpose), and dried spices, where I tried to help someone explain what regalíz (liquorice root) is to a spice-seller, and surprised the man looking for it when I guessed he’d make a tea out of it for a cold (which was, in fact why he was looking for it). From the same woman, I bought dried hibiscus flowers to make a strong, red, vitamin-c rich tisane to help with the hoarse voice. And I took a few pictures with the mini-cam, until the market finally spit me out about an hour later, and I went to the tourist-happy square with the museums and a falling down church and such. See?

Below market scene in Huembes, piñata and candy section. 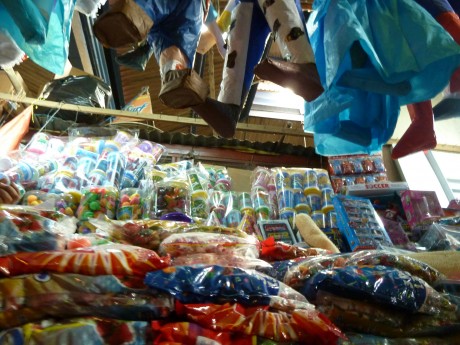 Checking to see if they sell regalíz (liquorice root). Sadly, no. But hibiscus? Yes. 10 córdobas a bag, about 40 cents. 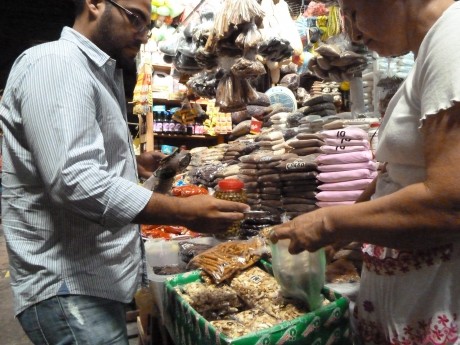 This is the last step in the process in the de-chaffing of the (red, kidney-like) beans. Earlier, the men shook them in the wood-framed screen, visible to the right. 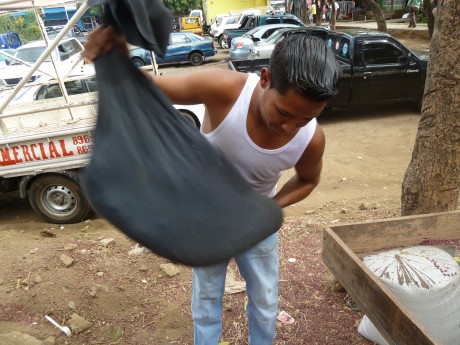 Abandoned (earthquake-damaged) church has been abandoned for some time. The church was closed to visitors, for safety reasons, though apparently not to Sandanistas, who were manning the front desk. I did not take a picture of them. 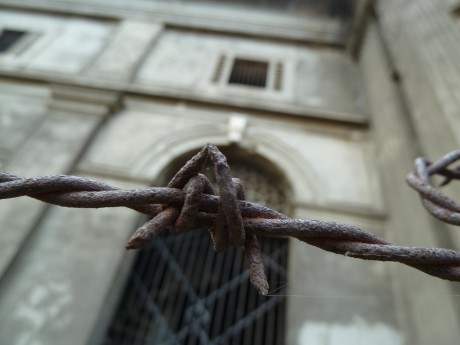 Certainly the church was, at some point, grand. 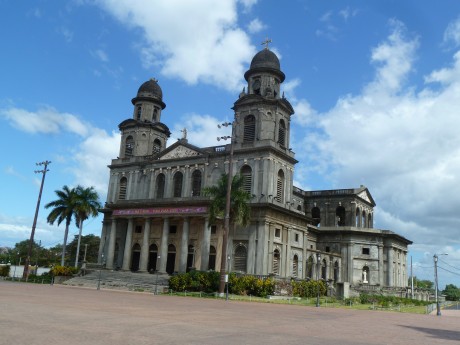 As I was standing in the square where the church, and also the national palace are, I met a woman who had had three of her daughters baptized at the church, years ago. The family now lives in Costa Rica, but the grandmother had come with one daughter, a son-in-law and two grandkids to visit. Later, the two of us having lamented the rise of gringo culture in Nicaragua there in the square, I traveled some 5 km back to the neighborhood where I was staying, where, I ran into the baptizing grandmother at the fancy mall nearby. She was coming down the escalator with a shopping bag in her hand, and I was going up the escalator, shamefacedly drinking a frothy coffee drink that cost more than my taxi ride.

And then I went back to sway in a hammock in the afternoon shade, and listen to the other travelers, who came through, spent the night, and then left the hostel with such speed that it was as though it had a revolving door. They didn’t much like Managua, it seemed, and (they should thank me for this) I didn’t say anything about what it was like 20 years prior, and just sipped more hibiscus tea.