Have you seen all of Chile? 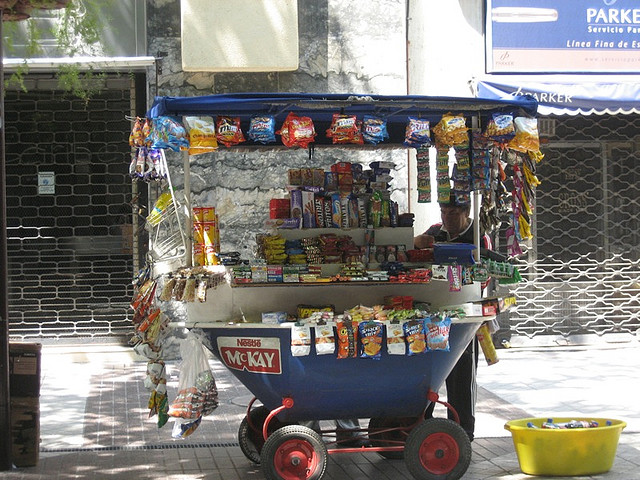 These little boats on Huerfanos always make me smile. They're mobile kiosks, but everyone always sets up in the same place.

I am often asked if I “know all of Chile” or have traveled most of it. Sort of yes and no. I mean, I’ve come in through the tippy top from Peru and been to Arica, which is far, far from home, and yet I’d never been up into the Aconcagua valley, to San Felipe, before this weekend, for the winestravaganza at Flaherty Wines.

We poured, and siphoned, and bucketed, and mucked, and glopped, and I think my cuticles are finally their regular color again, and the people were so lovely and calm and pleasant and positive and I got to run around in bare feet and hose things off and work and pretend I was a farm hand, Brooklyn represents. Because I am totally not a farmhand.

And I’ve been pretty much as far south as you can go. To Tierra del Fuego, but still not to Puerto Williams (weather and Christmas did not permit). And there is just so much of Chile, near and far that I still haven’t seen. I want to do a slow driving trip in the north. To Putre, and Paranal (the ESO observatory). Near here, I want to go to Rancagua (how have I never been there?), and to Los Andes (same). I’d like to take the metrotren to every stop (except Pelequén because I’ve already been there), and maybe PAC because maybe there’s not so much to see there.

I want to get to know every single beach town, even Mejillones, which everyone says is dull, and Los Vilos, where “nothing ever happens.” I’d go back to Pichilemu because I love it, and go visit El Tabo which has great graffiti, and look and look and look at the wide blue ocean that separates us from the rest of the world. I want to go to Juan Fernandez and wander on its rocky shores (and try not to think about the tsunami and plane crash).

I want to go to the south, to the various ice fields, drag a kayak overland and see fjords. I want to visit the Carretera Austral again and walk along terraced Caleta Tortel, and see the aquamarine blue of Lago General Carrera again, that color that I imagined when I was guided through a post-yega meditation and that almost made me cry the first time I saw it.

I want to pedal the length of the country, and then also its ribs. It’s not that I think that Chile is prettier than all other countries, though it is geographically lucky, with ice and sky and volcanoes and everything in between. But it is where I am now, and it is a place that has (pretty) great public transportation, visitable weather most times of year in most places (gore tex required in the south). Sometimes I can’t believe I’ve been here so long (8 years!) and still managed to see so little, despite “knowing” Chile from top to bottom.

So, where are we going next? And who’s coming to visit?