Now that the photos have been rescued, the latkes have been cooked and consumed, Christmas pavlova has been ingested and copious amounts of iced drinks sit ready and waiting for me to guzzle, I can finally take a minute and talk about Suriname.

I arrived to Paramaribo late, and my guesthouse had sent a shared taxi, which I took from the airport all around Paramaribo, which, per usual, did nothing to orient me to the city. Please ask my friends and family about my ability to get lost. It is mythic. Someone should write a book called “The girl who mistook east for west” and dedicate it to me.

I woke up the next day, hugged my air conditioner good morning and set about trying to set up some tours. What I’d most wanted to do was go on Cynthia McLeod’s Sweet Melodia tour. She’s a famous Surinamese author and knows a ton about history and is a great storyteller. Everyone said to take the tour. So I tried. Goodness knows I tried. The tour the next day was booked. The next one after that, which I stayed in Paramaribo extra days for was cancelled. Then I came back early to Paramaribo to catch the tour the following week, cancelled again. Sadly, it was not meant to be. Cynthia and I may never meet. I can only hope she’s as broken up about it as I am.

I also quickly noticed, as sweat poured out of areas of my body I did not know had pores, that there is not alot (warning, foolish understatement of the century) of English-speaking or English-centered tourism in Suriname. This does not mean that people don’t speak English. On the contrary, many, many people speak English, and speak it so well, that you occasionally wonder if they are native speakers with aphasia. Everything’s going great, not a word out of place and suddenly they stumble over how to say Onafhankelijksplein (Independence Plaza). Not like I could say Onafhankelijksplein properly if I tried. I learned quite a lot of Dutch, important words like left, right, turn, speedbump, one English-speaking woman, two small bags, butterfly and thank you. I can also recognize quite a lot of Dutch on a menu, like the only time I ate cheese in Suriname, which was at the Zus & Zo café, which was in the form of Uitsmijter, an open-faced egg sandwich, another word my seemingly aphasic waiter (perfect English, missing words) couldn’t find.

Over the course of my time in Suriname, I met three English-speaking “tourists,” one of whom was an Irish guy who was “doing South America” (heaven only knows what he was doing to it), an anthropologist from England, and a doctor-in-training from Northern Ireland, who was in Georgetown, Guyana, working at a hospital that he claimed had three flavors of patients: malaria, HIV, and gunshot wound. He had fled for the Guyanese elections, and strangely, wore a white button down shirt and khakis at almost all times, including when he bathed in a waterfall at Brownsberg, though for this he removed his fedora. I also met some American teachers who were in-country teaching at an American school through a Christian group. I would not have met them but for luck, both at the independence day celebration and then (a different group of them) on the same Brownsberg tour as the guy with the fedora. I also overheard some American missionaries in the main souvenier store in Paramaribo, ReadyTex (where I actually bought a couple of small items, including a watercolor painting I will probably never hang, up, but which I love). I went to talk to them and discovered that they live in Las Condes, Santiago. Small world.

But that is not to say that being an English-speaker is a problem in Suriname. You will find people who speak English. Not absolutely everywhere, and the eight other people on the van on my way to Atjoni to catch the boat to Pikin Slee either didn’t speak it or didn’t want to, but the van driver could tell me when we were leaving and how much the trip cost, which was all I really needed to know.

Everyone in Suriname speaks Srnan Tongo. It’s the Surinamese language, a pidgin of sorts, part English, which you can hear in sentences like “me see you,” which Derrick said as we were waiting for his friend to ride bikes along the sea dike in Nickerie. Almost everyone speaks Dutch. A smaller percentage, but still a majority, speak English, either very well, well, or not so well but still better than you probably speak Dutch. I also came in contact with people who speak “Javanese” (an Indonesian language, as there are more than 40,000 Javanese in Suriname), Hindustani, which in this case is actually a Surinamese dialect of Hindi, Portuguese (this in an area of Combe, a sector of Paramaribo, which people call Little Belém, after that city in Brazil) Hakka, Cantonese (both Chinese languages), Aucan and Sarramacans (both Maroon languages, spoken by descendants of escaped slaves in the interior). There are a couple of languages I am probably leaving out, and Aucan and Sarramacans have different dialects as well.

One of my most fun linguistic moments came when I was in the interior, hearing Srnan Tongo and Sarramacans most of the day, interspersed with English when people were speaking to me (for which I thanked them mightily). There was someone I wanted to talk to, one of the founders of the museum in Pikin Slee. I guess he wanted to talk to me, too, since at some point he asked if I spoke “taki taki,” another name for Srnan Tongo. I said no, and so we sat there, not talking to each other. At some point he got up and said some things I didn’t understand, followed by “amanhá.” And so I responded, “amanhá.”

The Dutch speakers asked me if I knew what I’d just said. And I said, sure. I just said I’d see him tomorrow. And when they asked how I knew, I said, “it’s the same in Portuguese.” It turns out Sarramacans is 45% from Portuguese roots. Which explains how even though I don’t speak Sarramacans, or Srnan Tongo, I always felt eerily on the edge of understanding what was going on. Which just makes me want to go back for more.

As do these photos. Peer, and then as you were. Like me, you should probably get back to work soon! Though feedback is always appreciated! 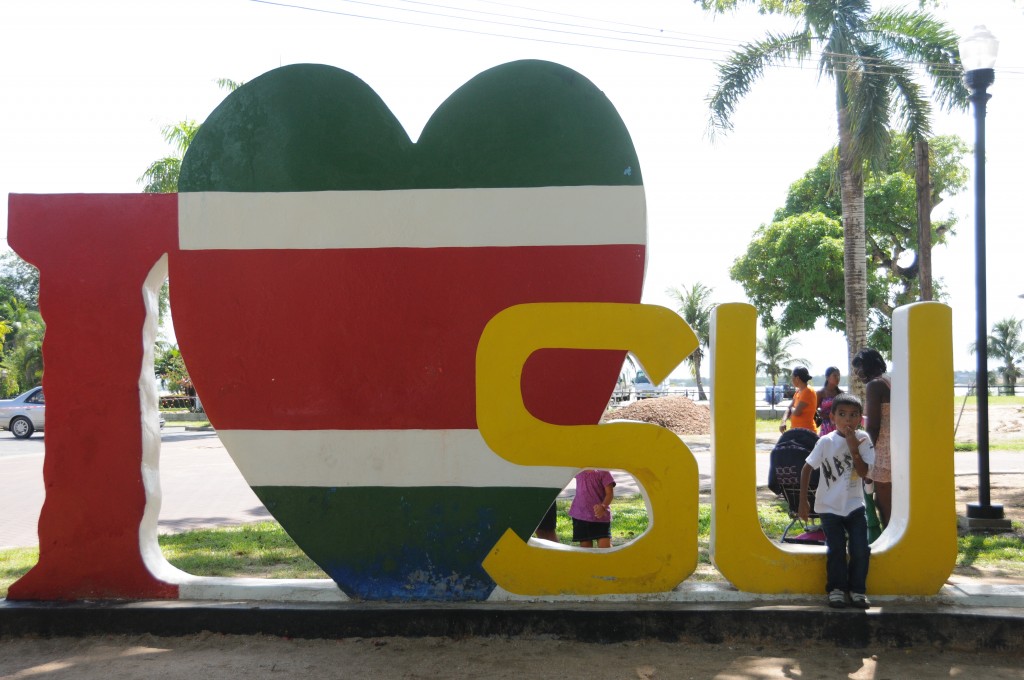 Kid on the I heart SU sculpture on independence day, Nov 25. 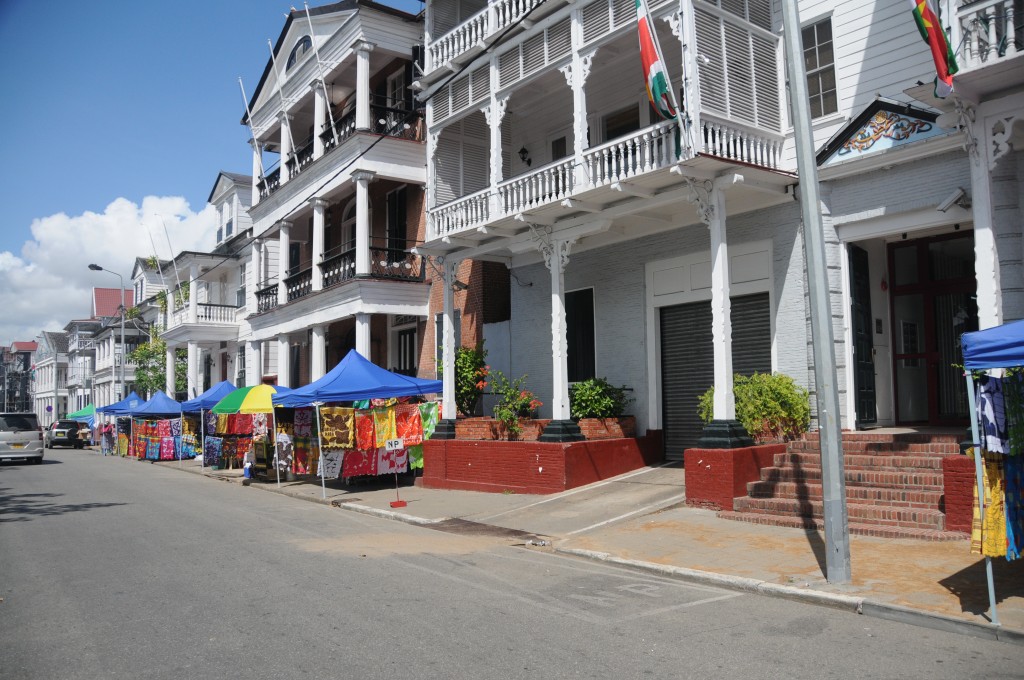 Pretty colonial buildings near the waterfront on independence day. 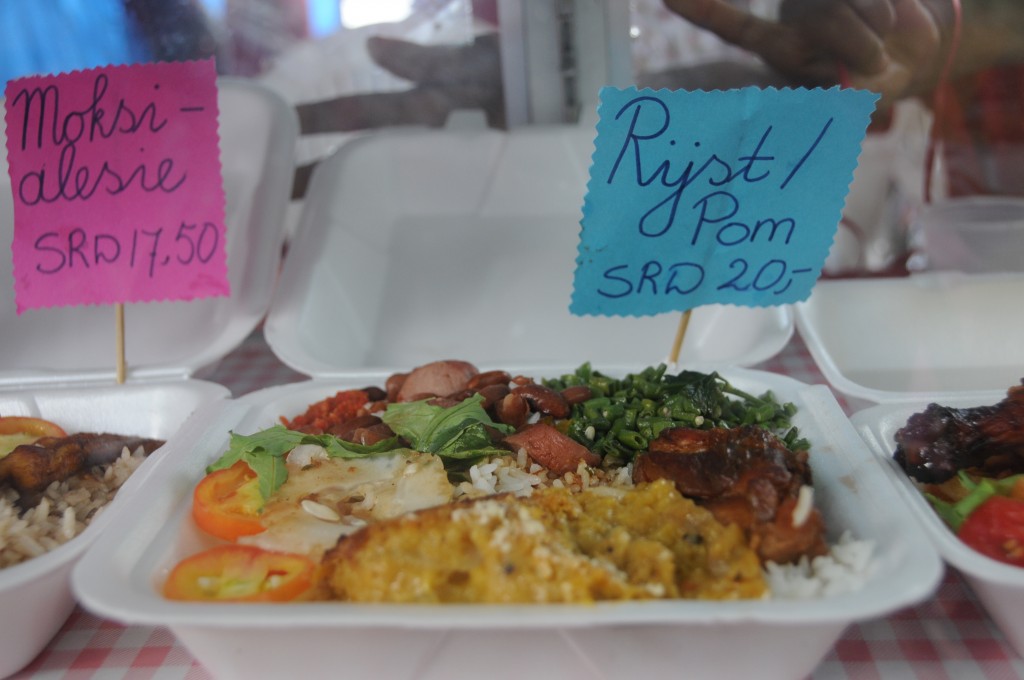 Rice and pom, a Surinamese casserole at a stand on independence day. 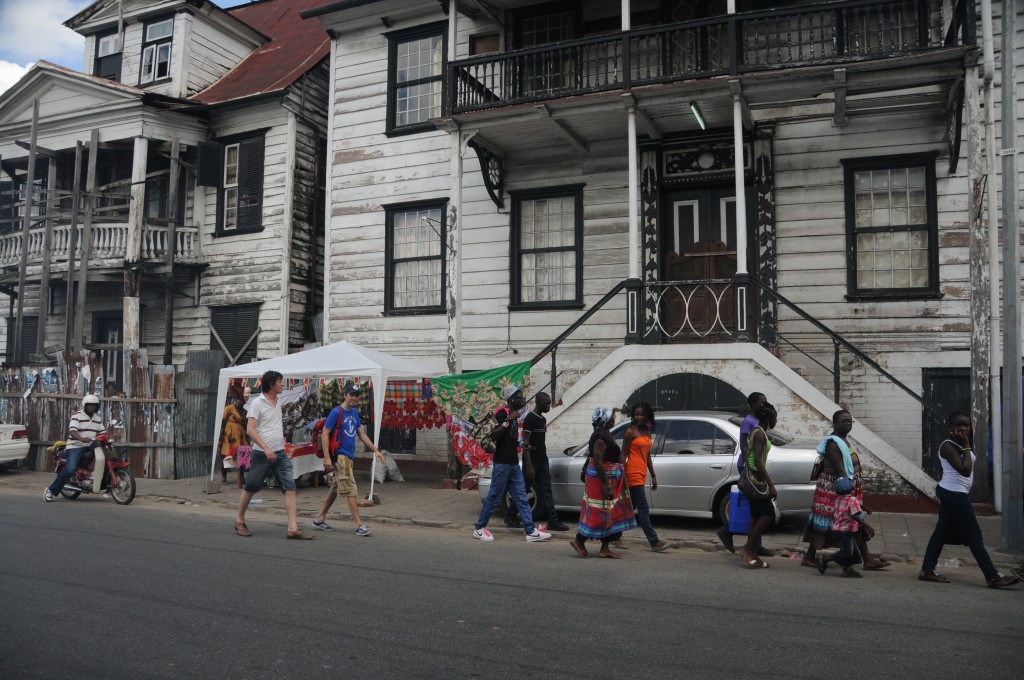 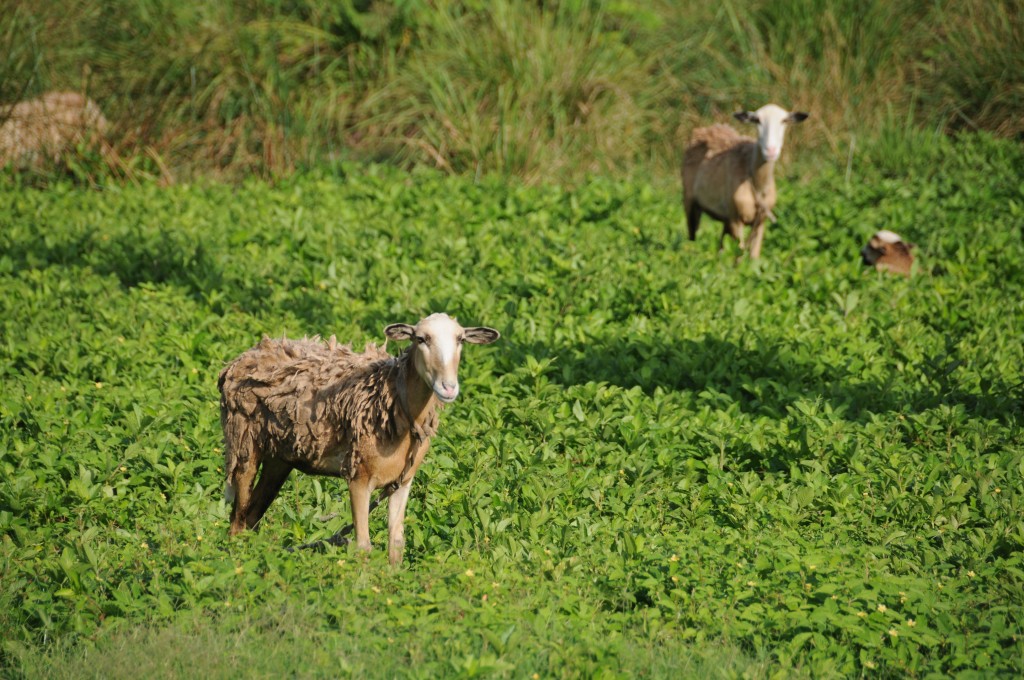 Very warm, somewhat bedraggled sheep outside the library in Nickerie. 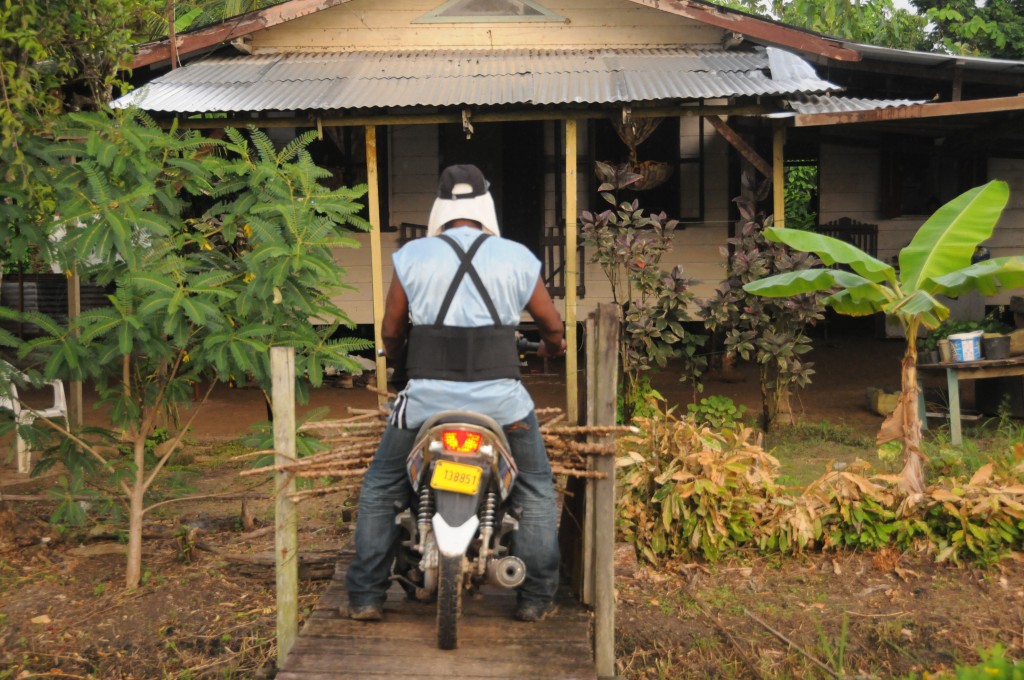 Stubbornness in the XY gene, exhibit A, Suriname. 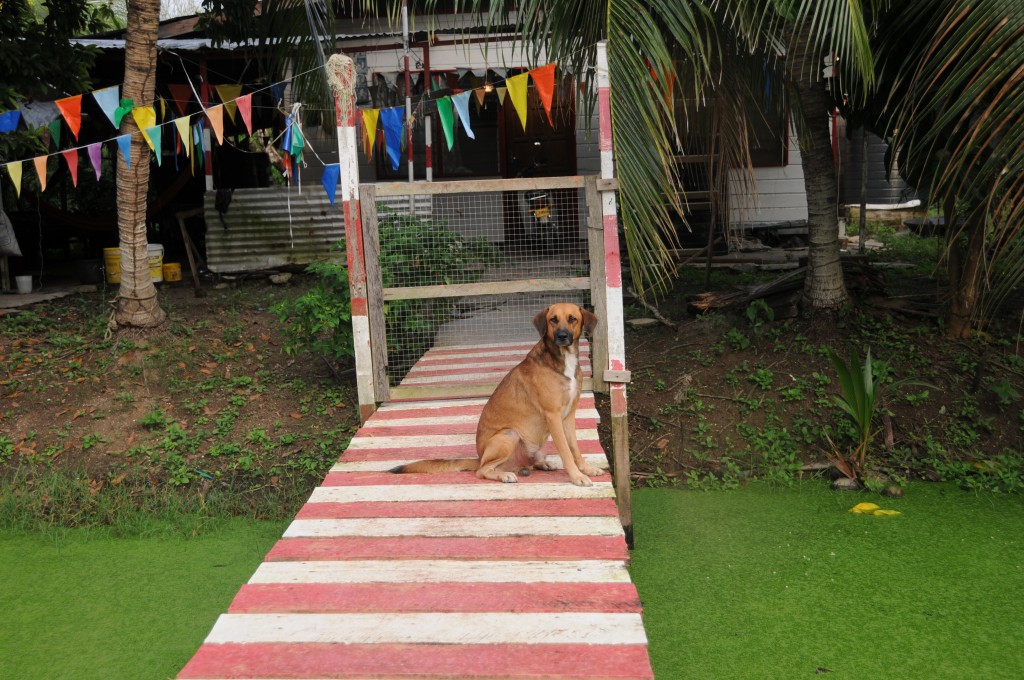 Poser, on sunset and dolphins tour, near Leonsberg, Paramaribo. 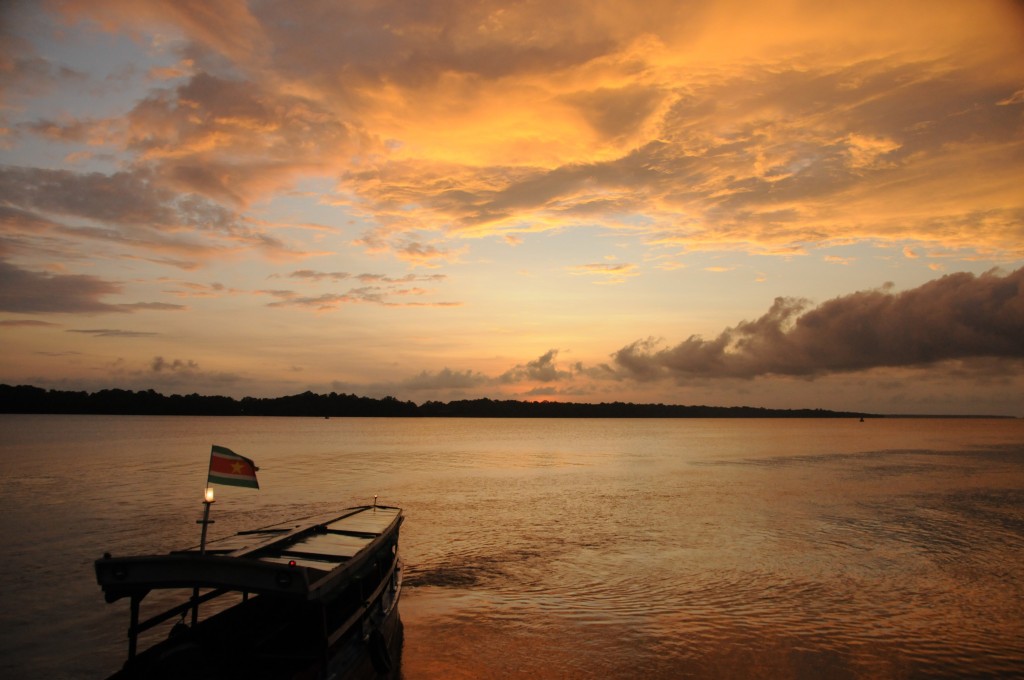 Sunset, on sunset and dolphins tour, near Leonsberg, Paramaribo. 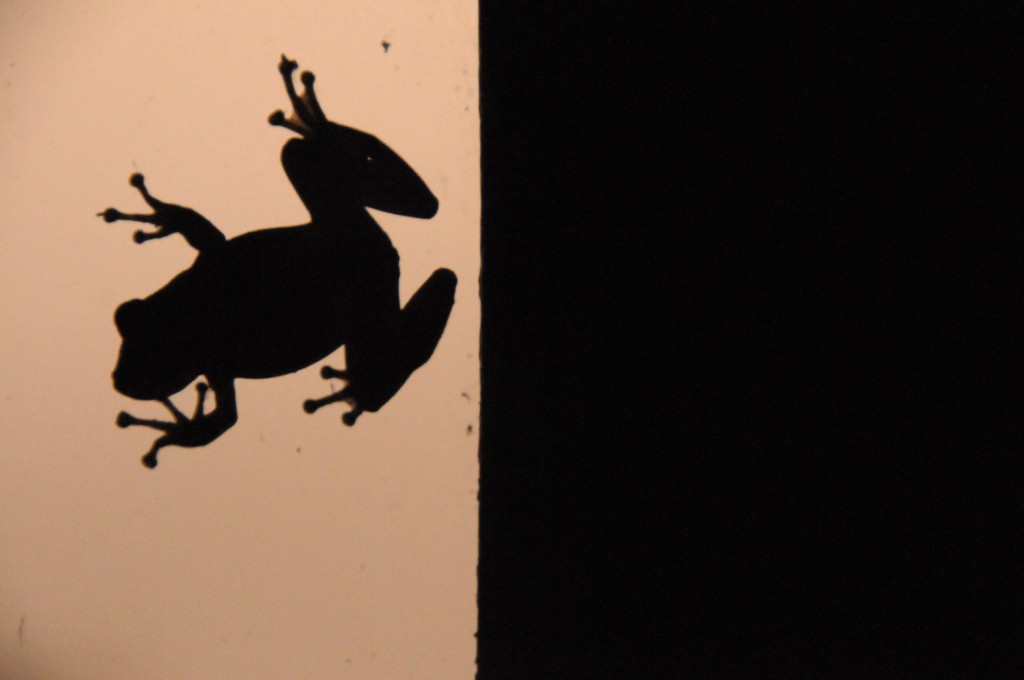 Wake up early in Pikin Slee and you might just see a treefrog (on window).