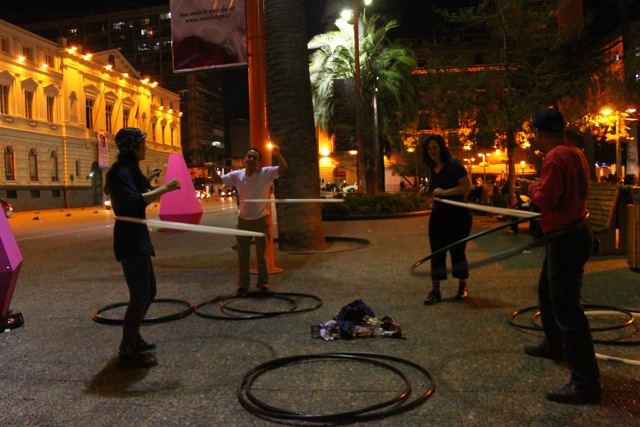 There’s no way to put this delicately. Sometimes I stand on the street with a bunch of friends and strangers, and then, with a giant plastic hoop around my middle (and occasionally a leg or an arm, but never my neck, because that hurts), I dance like I think I can.

Remember that childhood driveway pastime? Hula hooping? Well, we’ve got it. It started as a friend’s brainchild, and then there was purchasing of the right kind of polyethylene tubing, and the PVC pipe to join it together, and then there was sawing, and soaking of the polyethylene to soften it, and jamming the two ends together. And voila, an adult-sized hula hoop you can stand out on the street and rock out with.

We hula in plazas and parks, and though sometimes we’re as few was two or three people when we start, usually by the end of the session, we’ve tempted at least 30 onlookers to give it a try. Last night in the Plaza de Armas, some kids from Patin Urbano (a rollerblading group) popped by, and we all ran out to them with hoops, which they dutifully spun, and later used to jump through for tricks. I guess when you get people on the street doing peculiar things, they gravitate together.

Here’s a video short put together by Ignacio Pérez, a Venezuelan friend of the hula and performance artist living in Santiago. If you know me (and even if you don’t), you’ll see me running around in there. My favorite part is when I go zooming by kick-jumping the hoop at about 1:52. The footage is from a couple of weeks ago, from Plaza de Armas, Parque Forestal and from Parque Bustamante, though Plaza de Armas really is the best spot we’ve found so far.

And if you want to come out and play? Well, we’ve got a facebook page for that. So far we’ve had people from Chile, Peru, Colombia, Venezuela, Argentina, Canada, the US, Norway, England and Ireland, and from about ages 1.5 (just playing, kids seem to really get this at about age 5, not before) to about 65, and families with up to six kids popping by to borrow the hoops. It’s all terribly buena onda (good-spirited), everyone has a great time, and the main goal is just to have fun, which often seems perplexing to passersby.

Watch the SantiagoHula FB page for details on when we’ll be out next so you can come play, too. And no, I have not yet completely lost my mind. Wonder what I’ll get up to next week.