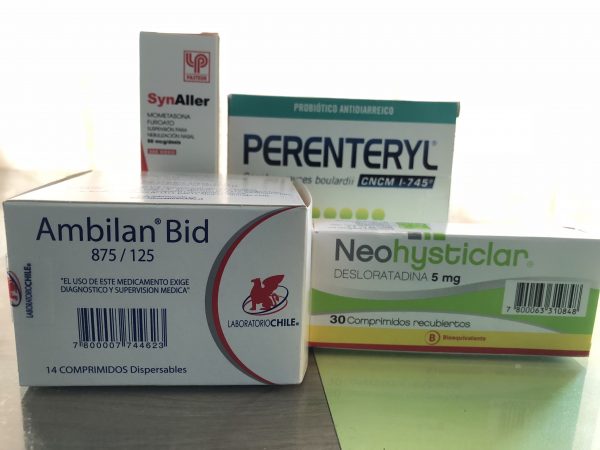 Something really big has happened. After fourteen years in Chile, something enormous has taken place. I have not purchased a home, gotten married, had or adopted children. I have not applied for my Chilean passport, adopted (or had) a cat, nor have I decided to leave, all of which would be gigantic.

Instead, I have developed a sinus infection.

A sinus infection, you say, of all the things? How does that make you Chilean?

Allow me to explain.

There are many kinds of sick you can get in Chile, and many things that will make you sick. Watermelon and beer is awful for your stomach, sleeping in a draft will give you a stiff neck (a particular kind, called torticolis, where your neck stays turned). And going out with wet hair? It will give you sinusitis.

I have been playing the odds with sinusitis for fourteen years. Fourteen years, my friends, and this year, this winter of 2018, particularly August, traditionally known to be the cruelest month (also when cats caterwaul their passion all night long, but this is not related to the story at hand), has bitten me hard. I have gone out with wet hair in the cold, and I have scoffed at the sinusitis-sayers for the last time.

It started with a cold, which I acquired through one of many vectors. Touching the metro? I try to wash my hands when I come inside. Yoga mats? I have stopped licking them (kidding, but they do seem unsanitary on some level). Being at the home of someone who had a sick relative around? I beseech you. If you have a person with a cold in your house, do not invite me over. I will catch it. It’s like jellyfish. I’m a magnet.

Or then there’s salsa. OMG, I am admitting this in public. Twice a week since April, I believe, I have been touching strangers (many of them) in one of three types of events in Chile that I have identified where there are more men than women. The others are beer tastings and long-distance bike rides. I have been dancing salsa. Not super expertly, nothing that would make you want to throw money in my hat on the street if I were to put one out. It’s crazy fun and I’m learning a lot about movement, humans and how bad I am at judging people’s ages. Seriously, I think everyone is either 27 or 35. They are not. Well, a few of them are, but a lot of them are not.

One of the many upsides of salsa is challenging your expectations. You may see someone and think they would not be fun to dance with and then there you are, swaying and swirling and un-dos-tres, cinco-seis-sieteing with them and it turns out that they’re a master and yay. I was an unmitigated disaster at first and now people even come up to me to practice during breaks so at least we can assume my deodorant works just fine, if nothing else.

One of the downsides of salsa is that it is every iteration of a petri dish. There is sweat, and sneezing, and coughing, and so much hand touching, and pretty much everyone at salsa (a total of about 50 people I have danced with or near in the past month) has been sick. Antibiotics sick. Stay home sick. Or in the case of one dapper young’un, “tengo amigdalitis, me siento como el hoyo” (I have tonsillitis and I feel like ass) sick. This as we do a move called “la ahorcada” which is so close that I think I should probably have met his mom by now. She may be younger than I am.

So one could assume that I owe this sinusitis not to fourteen years in Chile, nor to wet hair, so much as I owe it to salsa lessons. But I want to talk to you about this sinus infection. The last one I had was when I was taking SCUBA lessons in Massachussets, in college. I remember it unfondly. Since this one started with a cold, I have been beating it down with every home remedy known to man and woman. Astralagus capsules, elderberry syrup, elderberry lozenges with vitamin C and zinc, nettle tea, fresh ginger tea. SO MUCH raw garlic, bee pollen, honey, quercetin (bought it for my stomach snafu, but started taking it for this, too), and even homemade gluten free matzoh ball soup with homemade vegetarian stock. I am a walking hippie pharmacy.

I keep on going out and then coming home and sleeping for days. I missed a fun wine picnic in the park with many friends yesterday because I could not be vertical. At the suggestion of my co-author Pilar (we are writing a Chilean cookbook/memoir, agent signed, still seeking a publisher, very exciting!), who is also a physician, I started with the nasal steaming thing with eucalyptus oil and also the neti pot, which I have to say, I have never felt so hydrated in my life, but still sick. Though my skin looks superb.

So today I bit the bullet and went to the doctor. This was not a doctor I have seen before, and perhaps I shouldn’t throw him under the bus so handily but I have three things to say about his medical professionalism.

It takes a village. Between Pilar and Jodi, I really don’t need any other doctors. Though as Jodi points out, she’s not a doctor, and as Pilar points out, though she is one, she should probably actually see the patient before declaring it a sinus infection. But I’d like to point out that without suggesting I get X-rays nor shining her cellphone flashlight in my throat, she did declare just yesterday, “sounds like sinusitis.”

In addition to a village, it also takes a huge pile of medications, apparently. I asked for the extra probiotic to go with my antibiotic, because I’m like that. Also, 20% off on meds at my local pharmacy on Mondays. Like I said to the woman that helped me there, “it pays to get sick on a Monday.”

May your Mondays be more peaceful, and much less infectious. If you need me, I’ll be on the couch. And after I wash my hair, I might just stay inside a spell.