Santiago Carnaval Report. Dancers and Cuchiflies and Chaya, oh my! 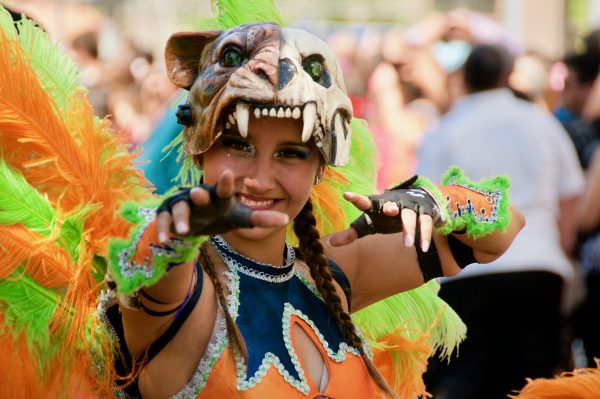 At any event in Chile, you are sure to find people selling something. Some of these people live mainly outside of the formal economy, selling different things at events and wherever crowds are likely to gather. Others are supplementing what they make at their regular job. You can find them outside of metros, on buses, at events and on specific corners downtown. Common items include whole wheat bread, cocadas (coconut confections), burritos, veggie burgers and sushi/handrolls. Consume at your own risk. Also, I think the supposed handroll seller in my neighborhood might have had something to do with attempted robbery (on my person) the other day (handily avoided, it was a typical saucing, where they spray you with ketchup and mustard to get you take off your pack).

But back to the vendors. What do they sell? Depends on the event. At a recent art installation that featured a giant rubber duckie, people were selling rubber duckies. This, unfortunately, was probably a short-lived bounty for the duck sellers, as on day two, the duck was pierced by an ill-placed sign (from the duck’s perspective) and deflated down into the lagoon. I wonder what will happen to all of those rubber ducks? This kid will probably keep playing with hers, at least. 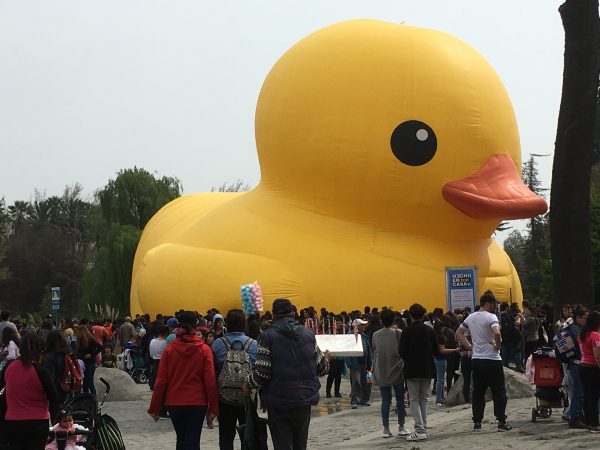 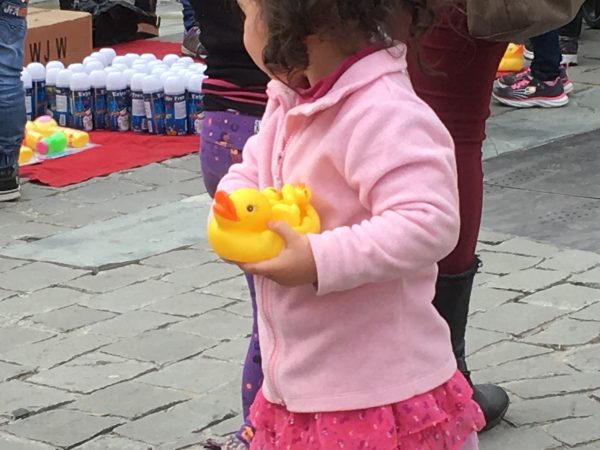 But sometimes what people sell is event-independent. For example, the ubiquitous “frutillas bañadas en chocolate” or chocolate-covered strawberries. I have never bought these, because I don’t like fruit and chocolate together, but kids seem to like them. 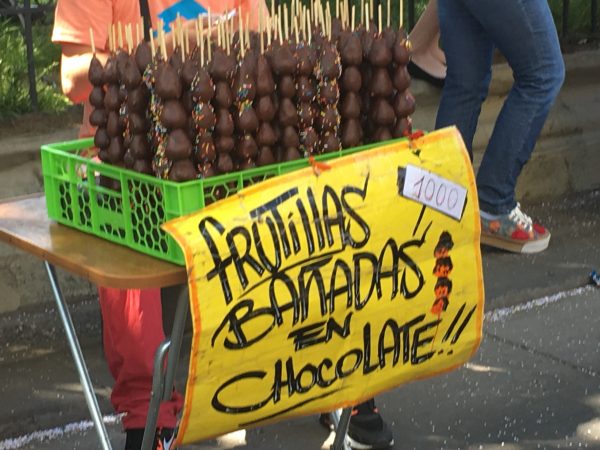 Another super popular-among-the-kidlets set are these cuchufíes (say coo-choo-FLEAS), which are a rolled wafer filled with manjar, as we call dulce de leche, and these glassy lollipops that I have never seen anyone finish. He is also selling peanuts, most likely candied. 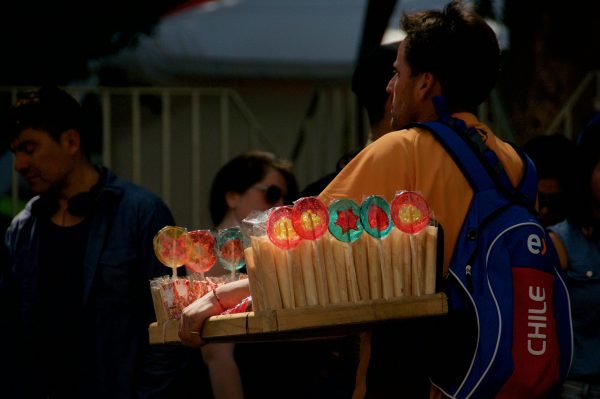 And of course, there is ice cream  and cotton candy, and what would a day in Chile be without the national candy bar, the Super 8 (super ocho)? 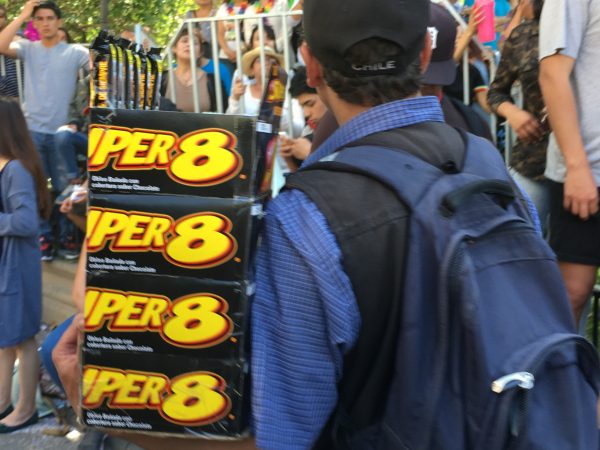 True story, I have never tasted a Super 8. When I first got here, they had meat fat in them (grasa vacuna), and then they just looked waxy, not super into chocolate, and at the moment I’m more of a one-ingredient-at-a-time type of gal. but when I go visit Chilean friends in the states, they’re an appreciated token. Consider yourself warned!

And of course, people wheeling supermarket shopping carts with confetti. Of all the things that are a consumer product, these bags of chaya have not gone up in price the whole time I have been living here. Chaya a cien, a cien la chaya! That’s for the little sandwich-sized bags. 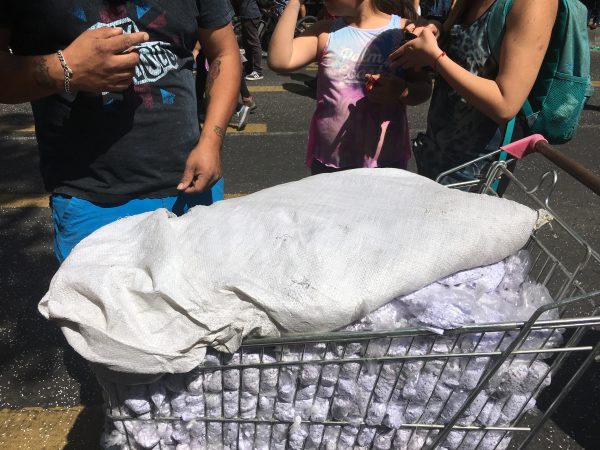 This was all at a carnival/carnaval, a fun procession of Violeta Parra-themed floats, mixed with dancers of many stripes and a whole lot of drumming. A fun Sunday afternoon activity. We were celebrating 100 years of Violeta Parra, on whose life “Violeta se fue a los cielos” (a movie) was based.

Maybe you’d like to see some photos of that, too? 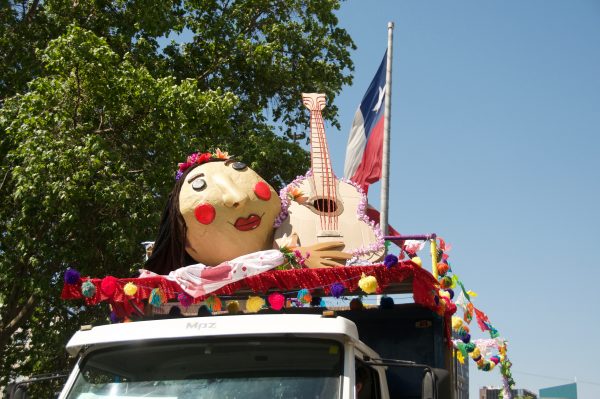 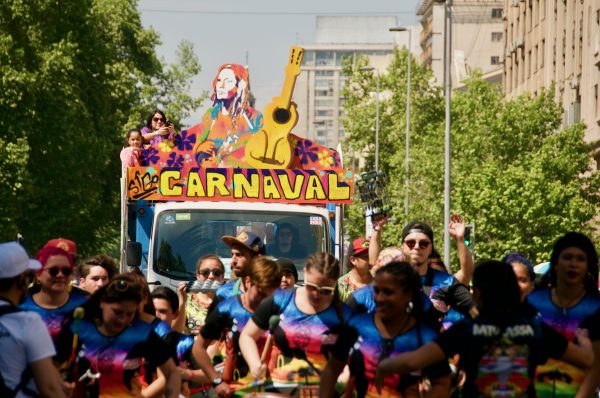 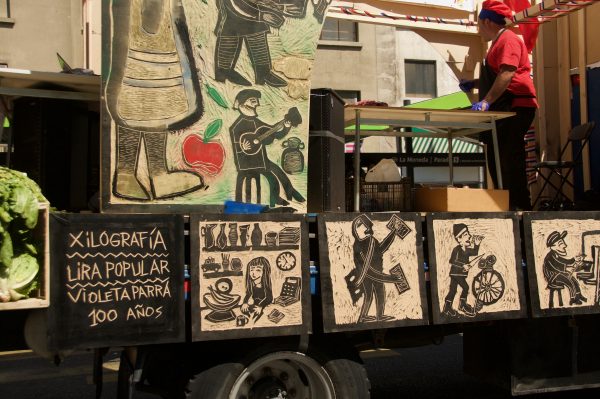 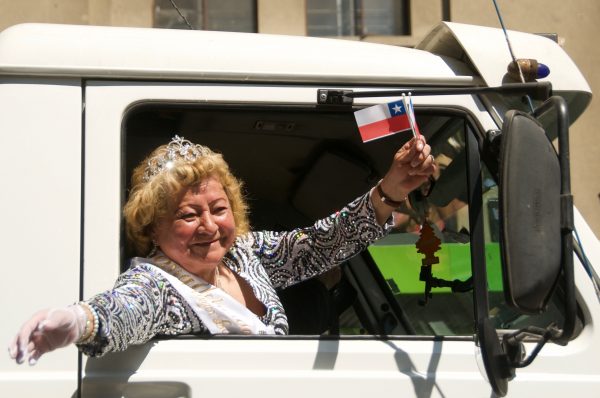 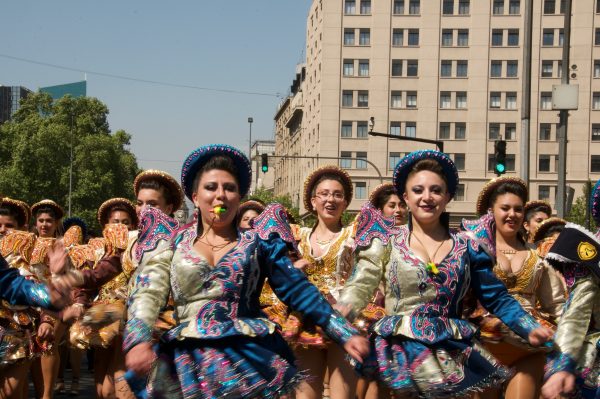 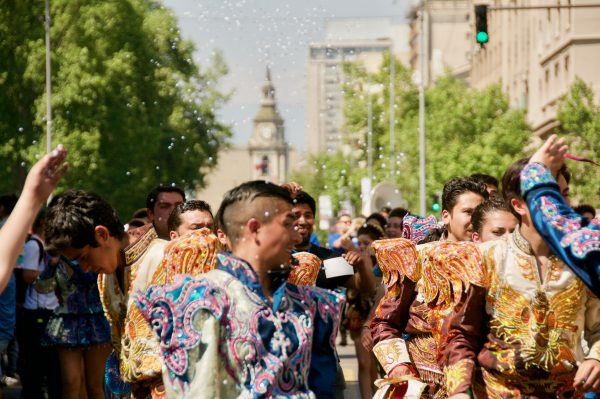 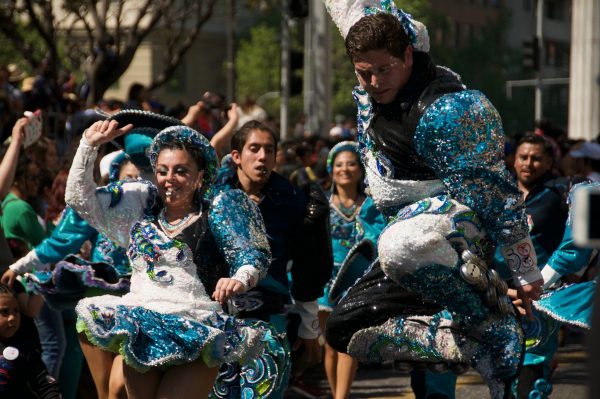 It was a super fun event, and I love how hibernation stops and everyone gets more active and energetic in these first days of spring. Many free artistic things happening of late, and throughout the rest of the summer. Just bring some cash and you can stay watered, fed and fully confettied. I also apparently got glitterbombed while I was out, maybe in the silly string? Collateral damage. Thanks, Santiago, and especially these incredibly enthusiastic performers who pulled it out ’til the very last minute, dancing their parts off until and beyond the end of the parade route. If you know any of the pictured performers, let me know.