Whereupon I walk in the rain, and manage to not get wet, and talk about panty’s, without mentioning underwear 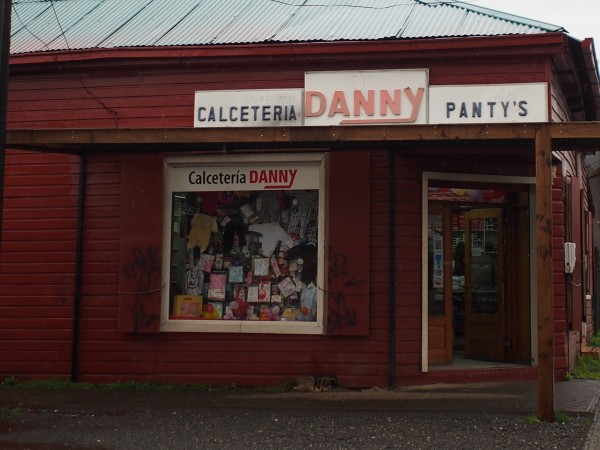 As I was wandering through Villarrica in what shall heretofore be known as my “expedition suit,” which is comprised of a goretex jacket that I bought new, and goretex lined ski pants and semi-fashionable waterproof boots, both of which I bought at the “ropa americana” (used clothing) store in Santiago, I got to thinking.

Specifically about stores that claim to sell one thing, but also sell another. For example, a botonería that sells thread. But really, where else are you going to sell thread? There is no hileria, just like in Chile, there is no empanadería, these being sold at an amasandería, which means they sell kneaded things, unlike a pastelería, which sells cookies and cakes.

What about a calcetería? You’d think it would just sell socks. Not this one. This one also sells panty’s, which you can tell by the sign up top. This is a combination that-doesn’t-mean-what-you-think-it-does, where panty means tights and the apostrophe-s-as-plural so commonly found around these parts. Plus you know, Danny’s Panty’s. Has a ring to it.

In other news, I’m in the south. And the not-secret about the south is that they heat their homes. It is an incredible thing. You just, you know, wear clothes. A normal amount. I think when I finally get back to Santiago, people will find me tall, since I have not been crunched into a ball for the last week. Instead, I have been with some pets. In a house. It has been lovely.