Reviewing Colmado in Bellas Artes/Lastarria and Rende Bú in Providencia.

After last week’s hit or miss, in which I reviewed places in Recoleta and República, one of my friends said, “oh, I was so interested, but I’m not going to go over there to get coffee,” I thought I’d switch it up this week. I am still going to review places that are in places that I go, even if they’re not in places where you go, but these two, well, trust me, if you live here or are visiting Santiago, you go here. And for both of them (spoiler), if you don’t, you should.

Colmado, which means heaping, as in a heaping tablespoon is a Cataluñan-run café on Merced, but inside a cute, open-air kind of gallery (painted yellow), so there is zero street noise. They are Spanish, boy are they Spanish, with their SSSS and JJJJ and THTHTH. And so incredibly nice. But first, the coffee. They have four different preparations you don’t see everywhere, including the showiest, the sifón. Coffee in a siphon is… well, it’s… You kind of have to see it. The water boils in a bulbous glass vessel at the bottom, over an open flame, then is forced up into a second chamber, and then rains down through coffee. It is the silkiest coffee you will ever drink, with nearly no astringency or bitterness, such that when they hand it to you, they advise you that you won’t need sugar. I never put sugar in hot coffee anyway, but it’s nice to hear a little coffee snobbery among friends. They also have Chemix and a couple of other preps, but this was the most out of the ordinary. 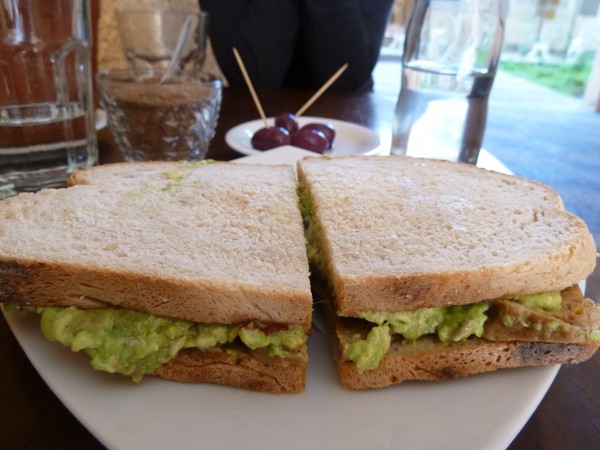 What else to say here. Fancy coffee prep, chocolate cake way too chocolatey for me (though I understand this is not a problem for mere mortals), carrot cake moist and frosting creamy, portions large. If you want the fancy coffees, it’s best to go with a friend, as some of them (like the siphon) they do with a minimum of two cups. There is indoor and outdoor seatings, and the best seitan sandwich I’ve had in Chile, EVER. Also, the only one, but the sandwiches are hearty (see above), and have a veggie option other than cheese. Hit, Hit, hooray. 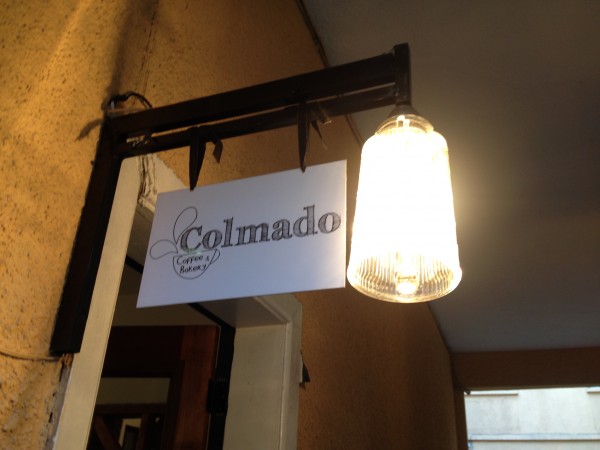 When you are in Drugstore, (say: Dragstur, mas o menos), you are probably looking for folding plastic chairs that turn into eco coffee mugs, or magazine stands made out of magazines, an overpriced lomagraphy store, or that weird lucite thing I never quite figured out what it was for. There’s a lot of home fashions here, and expensive shoes, and handmade soaps and garnet jewelry and trappings of a life I do not, generally speaking, lead.

Then what was I doing here? Killing time, hanging out. And oh, swinging on a porch swing inside a small mall as I sat and drank an Americano. Did you hear that? Porch swing. This is a ridiculously cute café, all springtime yellow and turquoise, and a large communal table with a strip of astroturf running down the middle, with small hinged plastic boxes covering enough outlets for everyone. The waitress was unbelievably lovely, and the coffee is tasty, though it was confusing, as the Americano that I ordered, and the double espresso that my friend ordered looked and tasted very similar (though the americano had crema, and the espresso did not, and I don’t mean cream, and if you think I do, then you are not the coffee snob I thought you were). Meaning, they pull their shots long, and if you don’t like that, you should probably tell them. Did not try, but looked tasty, many sweets, including cheesecake cut in very long, slim pieces.

The only thing I did not like about this café is that it calls itself “el primer hip café de Santiago,” (the first hip café of Santiago). Oh, and that it wasn’t until the fifth time that I didn’t couldn’t remember what the café was called, that I pronounced it to myself in Spanish and realized that “rende bú” is supposed to be pronounced approximately “rendez vous.” (in Spanish we say that with the accent on the vous, or as you may know it, the bú). Ugh. Goes with dragstur, I suppose. But still. Porch swing. Nice coffee, awesome staff. Go. Also a hit. 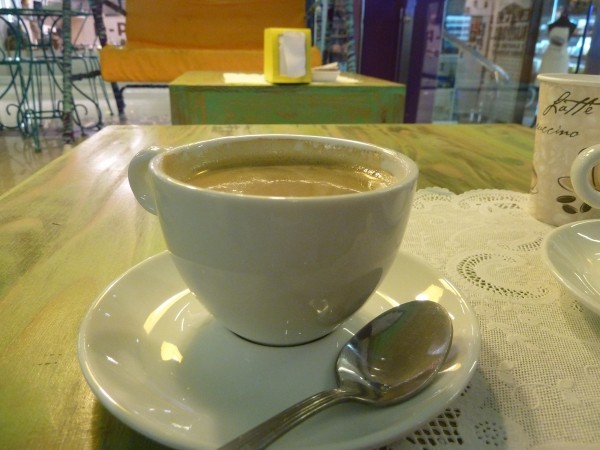 I’m two for two on hits in today’s version of Hit or Miss, and in neighborhoods you might even go to. I will try to review something more horrible or inconvenient shortly.