Papeleo, or as you may know it, bureaucracy. Renewing my Chilean carnet.

This is long. You might want to get a snack.

I am very lucky that the government of Chile has seen fit to allow me to live in their fine country. I’m not much of a drain. I take quick showers, don’t smoke, help out when I can, don’t start fires, and only sometimes yell at people on the street.

In return, they allow me to pay taxes, get health insurance, vote (really, this after 5 years of legal residency), not pay the reciprocity fee on my new passport, and hold a Chilean carnet.

The carnet is your link to everything. On it, it has a number, which we call your RUT (root), a number you can get even without a carnet, but the carnet is what you really want. With it, you can get a cellphone contract, telephone service, internet, cable TV, a bank account (maybe, usually only with residencia definitiva). It’s also your number to collect points at the pharmacy, supermarket, department stores, etc. Sometimes when you leave your bike at a manned lock-up, they will ask for your RUT as well.

But your carnet expires from time to time. And that is sad. And sometimes you might lose it. And that is even sadder, because it is your fault, and man, is THAT what that woman was shouting at you as you were riding your bike down the street that time? What a fool!

When you first get a visa in Chile (a non-tourist one), your carnet only lasts a year. I’m not going to talk about that renewal, because it has an extra step to it (Actually, two), that I didn’t have to do this time. My carnet is due to expire on October 22nd, so I thought I’d better get to it.

So I packed up some of my valuables, and departed. 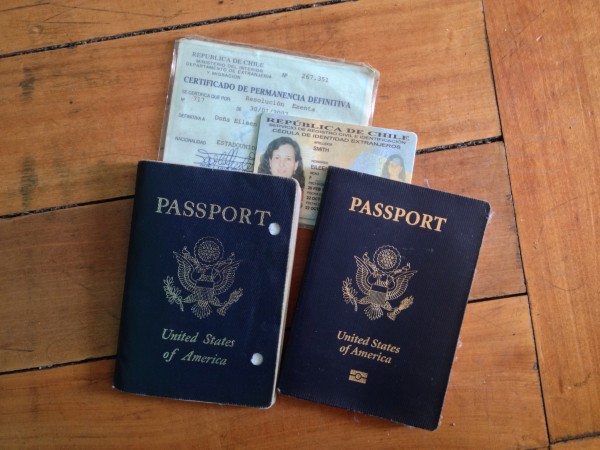 First, I went to Policia Internacional. This used to be in a grand building on the other side of the river in Recoleta, with pretty tiled floors and high ceilings and the generalized shusssh of a library. After the earthquake it was moved, to a building at Morande 672, slightly north of what most people consider to be central downtown, but still pretty central. It is not a large building, and does not have high ceilings, nor a shushhhh. You can see the building from a block away because there is a long line outside. 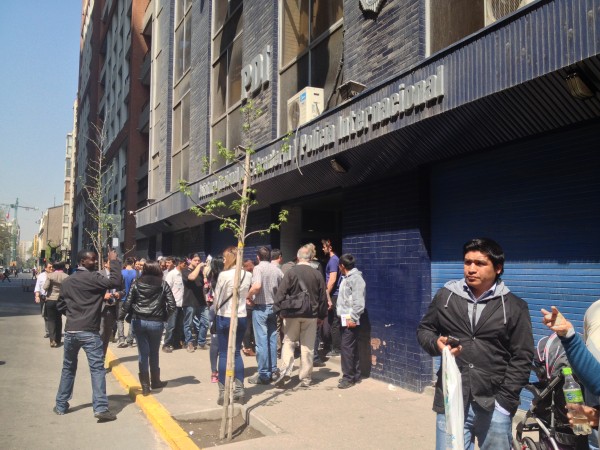 When you finally get to the entrance, you then stand on a line, where you see this: 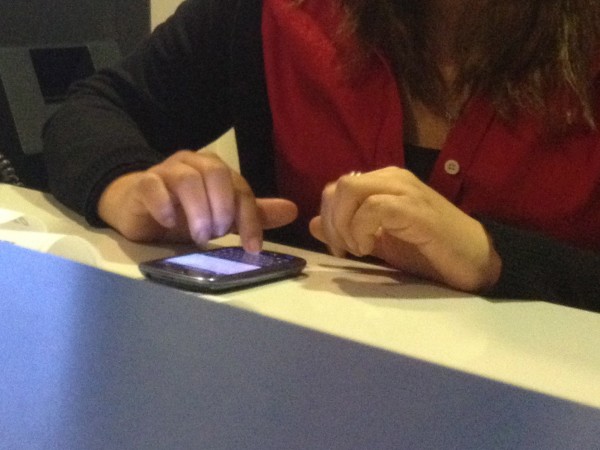 As you can see, people are very concerned with getting you through the bureaucracy at lightning speed. Or they are texting their friends on the phone. Either way.

Here I told them I needed certificados de viaje y vigencia. The cellphone woman pushed a button to give me a number, and the guy beside her took my 1600 pesos (about $3) and gave me receipts for the two documents. Insert wait of well over an hour. When my number was called, I presented my passports (my passport had expired since last I did this bit, so I had to bring both), my certificado de residencia definitiva, and my carnet. The purpose of this visit is for the police to corroborate that you have not been out of Chile for more than one continuous year, because this invalidates your permission to be in the country as a resident, unless you get a new visa. The woman at the counter looked at her records, and leafed through my passport, told/asked me that/if I travel a bunch (viajas bastante), and finally printed out the two letters I needed to show for the next event. The dreaded Registro Civíl.

First, I want to say that I support the right of workers to strike when their working conditions are not in alignment with their contract, or contract negotiations fall apart. What I wasn’t super excited about was the paro (not a strike, a work stoppage) that the Registro Civíl went on. The Registro Civíl is the national entity that does (among other things) all the identification stuff. Carnet, passport, that kind of thing. They were on paro for reasons that I understand are related to the new ID system that the government of Chile bought for 350 million dollars, and felt that some of that money should have gone to their salaries. I get that, who doesn’t want to make more money? But at the same time, that’s not really a working condition, which is the kind of stuff you should be striking about, but maybe I’m only partially-informed. Anyway, they were closed for 19 days, and allegedly all of our carnets that would have expired soon after the paroare good for the rest of the year, and that’s fine in Chile, but when I fly back into Chile from other countries on the second half of a round-trip ticket, they ask me for my carnet, and I could not be sure everyone in the whole world would get the memo. So I had to go.

First I tried one afternoon in Las Condes. You used to be able to go a bit after 12:00 and get a number that would still get you helped by the end of the day, but would minimize your waiting. Not so, this day in Las Condes, when they’d given out 300 numbers and the system was stalling, and people were feisty, and I saw a security guard give a woman “la pared” (literally, the wall, here it means “the hand”) to get her to stop asking him questions.

So here’s a fine PM view in Las Condes, a posher district than the one I live in: 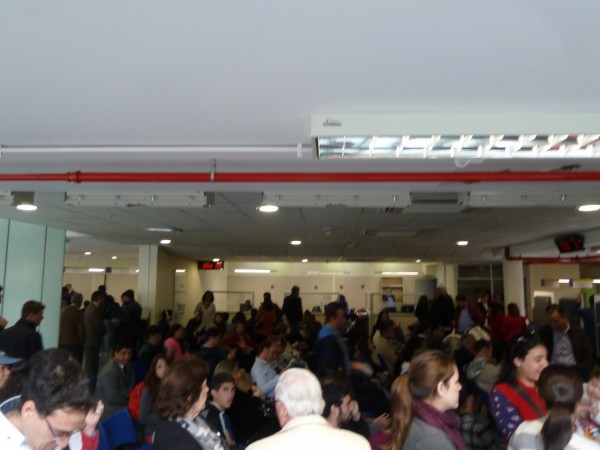 Thusly foiled, I woke up earlyish the next day and jumped on my bike to the nearby Registro Civíl at the corner of Huérfanos and Manuel Rodriguez. This place is notoriously crowded, but I knew I wasn’t going to go up to the one in Providencia riding my bike through rush hour traffic, so downtown it was.

I got there at 8:05 in the morning. And this is what it looked like outside the building. 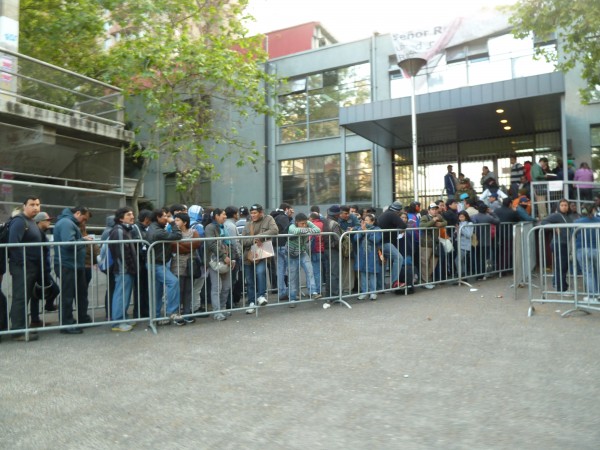 Then I waited on line outside for about an hour before I got inside. I met a very nice Cuban man and his Colombian girlfriend, and later another Colombian man. It is worth noting that I also met two Colombians at Policia Internacional, which means one of two things: I am a Colombian magnet, or the immigration tides are changing here in Chile. In fact, I know immigration tides are a-changing, as I’ve been doing a little research, but I will talk about that another time.

I then got inside, where someone asked to see my paperwork, and sent me upstairs to make a copy of something I didn’t even know I needed to have, but had thrown in my purse at the last second, the original of my certificado de residencia definitiva. I went upstairs to make the photocopy, and came back down, and only one other person had gotten on line in front of me, as they were letting us in in cohorts of about 15 people, and I had been the last in my group, and they had not yet let in another 15 people. They were alternating the hundreds of people who had to do the transaction to get a new carnet from the hundreds of people that had come to actually pick up their carnet. So there in the line, another woman came by to look at my documents again just as I was coming back with the photocopy, and she said, “you didn’t have to make a photocopy, I could have done that for you.” Score. She also told me to hold that stuff in my hand, but put my carnet away. I have never been a fan of holding stuff in my hand for hours on end when I have a perfectly good bag on hand, so this advice, unlike the advice to go make a photocopy of something, I did not take.

And then I got to stand on line inside. 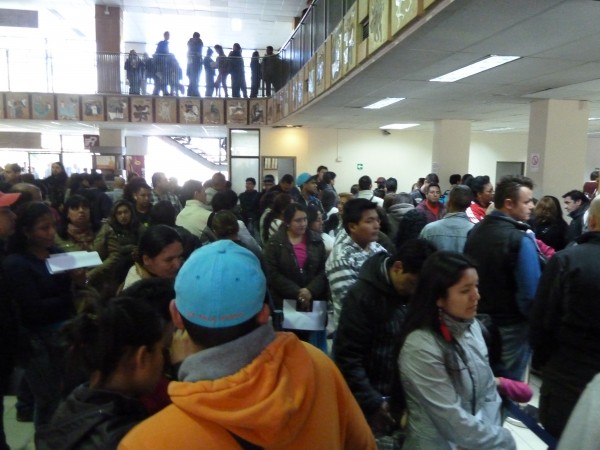 But at least there was this colorful sign to regard, and wonder how it had affected my waiting time. It’s a union solidarity sign, fairly cognate-friendly, so I won’t translate. 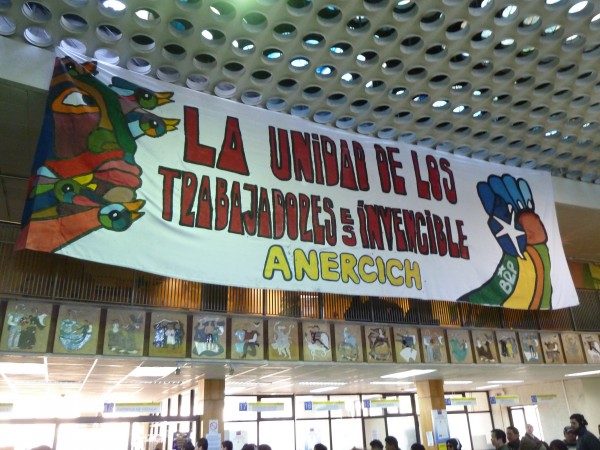 I won’t lead you through all the twists and turns, except to say that I saw this sign, which answers the question I had left you with before. This was on the last pillar before the last lap to get to the staging area where they let you in to see the nice ladies and gentlemen who will “process” you. 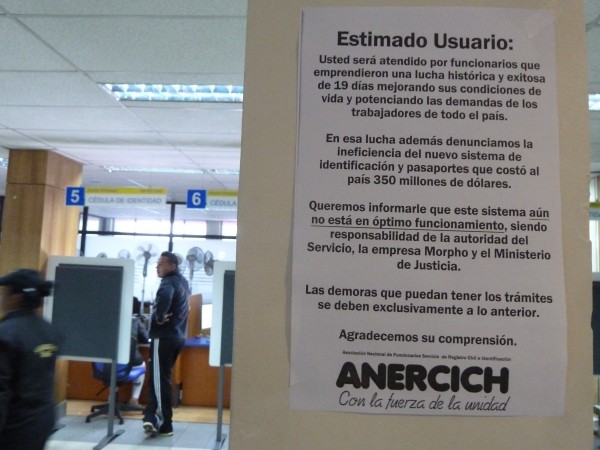 You will be helped by workers who have fought a historic 19 day fight, bettering their living conditions and strengthening the demands of workers all over the country.

During this fight, we also lodged a complaint about the inefficiency of the new ID and passport system, which cost the country 350 million dollars.

We would like to inform you that this system is still not functioning optimally, which is the responsibility of (three entities, including) the Ministry of Justice.

Your wait time in processing this paperwork is owed exclusively to the foregoing.

We appreciate your patience. (some liberties taken to make it sound more natural).

And, as the kind of astonishingly-posted sign (could you imagine something like that in the US?) foretold, the system crashed while I was waiting to have my photo taken, and I had to be sent to another counter. I paid about $8 (4050 clp) changed my address in the system, made little antennae out of my fingers so they could take my left and right index finger fingerprint, was given a piece of paper that I can now use with a password to get a certificado de antecedentes (police report) in the future should I need one (this used to be done in-person at the Registro Civíl), and another one for me to pick up my carnet when it is ready. I was then sent on my way.

This is the tech setup, in case you were wondering. The box on the right is where I made my antennae-fingers, the one on the left is where I signed. 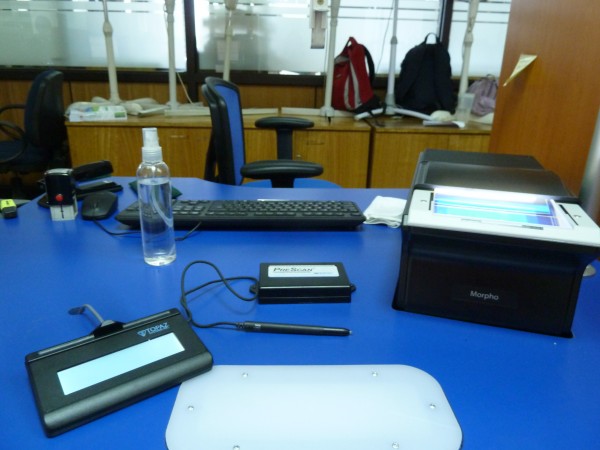 Check out the time now: 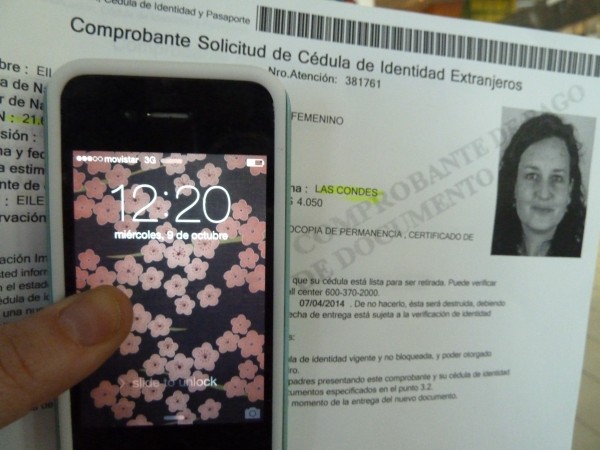 But wait! It’s not over yet. I still have to go to pick up the ID once it’s ready. I told them to send it to Las Condes, because I want to see how that system works, if it ever does. I already have experience with Santiago Centro and Providencia. Also, in Las Condes, at least if I pass out from the frustration, at least I’ll be in a nice neighborhood when it happens.

In other news, the paper says my ID will be ready on Oct 17th, but the woman at the counter told me to expect an additional 5 days, and to check for its availability online. I can’t wait to see how this turns out. Black and white, apparently? the new system has photos in black and white again. Weird. And a QR code, despite their near-complete non-utility. I wonder if that’s what cost the 350 million dollars.

Also, that look on my face in my carnet photo? Lo saque barato (I got off easy) Believe me, after 4 hours and 20 minutes in line, it was the closest I could come to a smile.

Yet to come: the Las Condes shuffle or how I spent (insert ungodly amount of time here) waiting in an underground bunker to receive my national ID, which, unlike a Chilean’s ID, which lasts for ten years, only last for five. I only pray they’ve figured out the system by the time it’s time for me to get a new one.