What I wish someone had said to me about writing, though I might not have listened 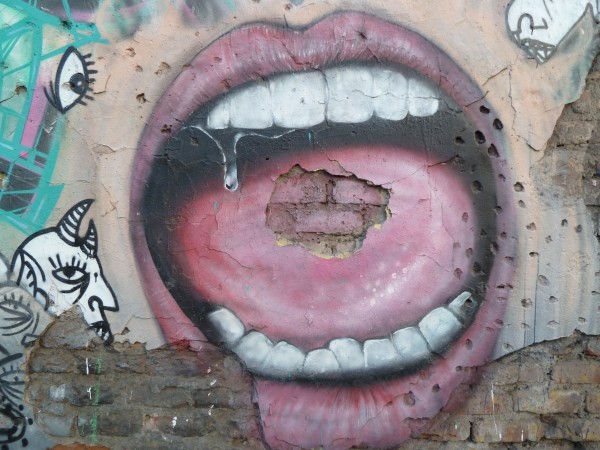 Let what comes out of your mouth be a reflection of you. Where mouth=hands, too. Photo, detail of street art, in the San Diego area of Santiago, Chile

Sometimes you’re talking to someone much younger than you or who has had different life experience, and you’ve got this boiling need, this firewire torrent of stuff you wish they knew, but that you can’t tell them, because their brain doesn’t know how to read that kind of file, and anyway, what you find out for yourself is always much more of a lesson than the freebie someone tries to give you while you’re just standing there, like a know-it-all.

But sometimes you get lucky, and someone you really respect (and like), and whose writing you enjoy, asks you to write down some of that advice. And I got to thinking of what I have picked up over this time, from my own experiences, and from reading dozens (or hundreds) of you. And so when Pam asked me (and some other people) for some writing advice in preparation for TBEX presentations, here’s what I said (keeping in mind that in life, there are two classes of things to say. Those you need to say, and those you need other people to hear. I still haven’t decided which this is):

Be circumspect and exacting with your words. If you sound like some other, more inane, less spot-on version of yourself, or it’s all coming out clunky, make a paralell folder called “cuts.” Here, I’m using it now. I repeat myself or write something that wasn’t quite right, or put something in the wrong place, it goes into the file called “Writing Advice Cuts.” That way I don’t have to mourn for my poor dead words that will never see the light of day. I just know that they are in a better place, which is not in front of your eyes. At least not until they recombine and do a dance and I can find a good home for them, at which point they can come out and play again. Or maybe they’ll just gather dust. That’s ok, too.

Be the full-strength version of yourself. When writing, think about the fact that there are no objective opinions, no absolutes. A place isn’t a certain way. It is that way to you, the jumbled, flawed, multi-faceted protagonist. Don’t tell me what it’s like, tell me what you experienced, understanding that what you saw/felt is a direct consequence of who you are. For example, in Chile, I’m a long-term expat. In Nicaragua, I’m the perplexingly Anglo-looking seemingly native Spanish speaker. In the US, I’m (sometimes) a cultural nincompoop.

Every facet of who you are interacts with the place that you are (backyard, cruiseship, friend’s wedding, moon, etc.), and it is relevant to your experience, and to the reader, who may be nothing like you, but who probably likes you. (There I go again, something for the cuts file, not because it’s not true, but because I wasn’t quite sure where to put it).

What do you know about, and what are you good at? Write about that. It wasn’t until I was talking to Pam one day that I realized that my life-long love of linguistics (ooh, alliterative!) comes out in my blog. “You write about language” she said. And she’s right. So I write about that, and it’s some of my best work, but most importantly, it’s some of the most fulfilling work. You speak best when you are in your milieu, which goes back to the first point, knowing who you are.

Reprinted by Pam with permission, and you can get permission, too. You just have to ask. Which is another piece of writing advice. No stealing! Read more from Pam, and more advice from a bunch of smartypantses here.