Coming back from time away, Nicaragua, Costa Rica, Panama 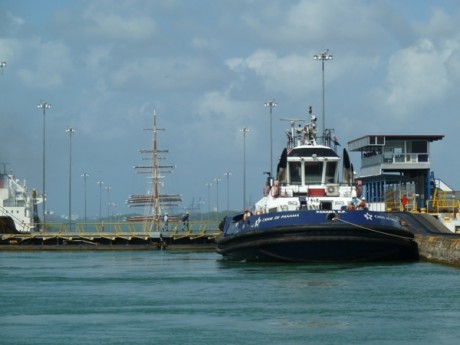 There’s probably some expectation that I would come back from a trip away and come back with the big reveal. I rediscovered my 21-year old self, recaptured a sense of wonder and entitlement.

One of the main differences between the me of 20 years ago and the me of today is that I don’t say the very first thing that comes to mind. So yeah, I’ve got some thoughts. But for now, I’m just going to think them. I’ll get back to you on where that takes me when it’s time.

For now, today is taking me from Panama City, after a five day all-canal-all-the-time tour, so much so that I have excavation and cranes and water reutilization basins and the great ensanchamiento (widening) of the canal coming, if not out of my ears, then spilling out of my brain, like water at the Madden spillway. I have been to Miraflores and Pedro someone or another and Gatún Locks, and I have sat in a boat and risen and fallen with the lockwaters, and touched the slimy green wall, along with tens of others, who proclaimed the wall, “wet,” as if somehow a wall which has been washed in water 40 times a day for the last 99 years could be anything but.

I have eaten watermelon cut into geometric shapes, and slimy slabs of papaya, which I have been trying to like since I first ate it as a child, and while, over time, I no longer consider it to taste like vomit, I have yet to figure out what it does taste like. Except that last night at the farewell do on the terraza, the pot de creme that I’d been eyeing all night turned out to be papaya-flavored, and with that, I left it, barely scraped, in its little fluted cup, like some kind of privileged tourist who doesn’t know a good dessert when she sees one.

Which I am. Going on a tour when I’m used to fumbling through it on my own left lots of time for reflection, but being with 50 of my new best friends didn’t leave much auditory space for it. It’s like this trip had several portions. There were physical islands (Big Corn, Little Corn, Bocas del Toro), practical islands (Grenada, Nicaragua, Puerto Viejo, Costa Rica), and in between, a couple of capital-city stays, Managua, where there is no “there” there, but which I enjoyed all the same, San José, Costa Rica, where I stayed too long because I was reviewing tours for a website I work for, but which was fun, and where I ate a lot of refried beans squeezed from a sachet, and then Panama City, where (before the tour started), I stayed in a comfortable but echoey hostel with a bizarre lighting scheme but an excellent setting in the Casco Viejo.

And then there was the tour. The day I switched from sink laundry with brought-from-home laundry line and clothes pins to a place where someone else made my bed was less strange than I expected, but I was mainly caught up in when my mother would arrive (late), and why the people at the hotel I was staying at were completely incapable of telling me where I might find an ATM (answer, about a two-mile walk away).

I am looking forward to getting back in touch with my Santiago people, who I know will have stories and plans and laundry of their own, and of fitting back seamlessly into the life I locked behind me for a few weeks. As always, I hope for more focus, less time dithering on the internet, more good food, and more spending time with people who don’t care where I’ve been, but only care who I am.

Pictured, Gatún locks, with tall ship in front, which we never saw again, as though it were a ghost.