In the spirit of looking a little more out, and a little less in, I thought I’d share a couple of pictures. I seldom wish I lived in a more rural place, but every time I travel to one, I think, oh, maybe.

Maybe I would like to wake up and see this guy on my walk to work: 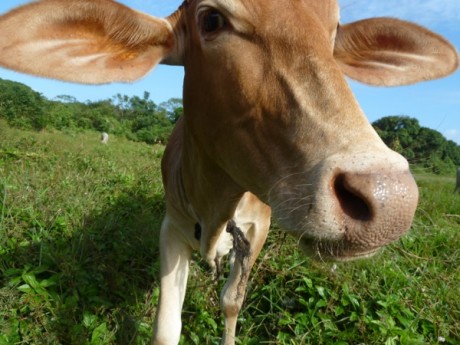 Actual cow in the field opposite the stadium about 30 minutes walk to the left side of the boat landing on Little Corn Island, Nicaragua.

Or maybe I should live somewhere where I looked out on water, or crossed it on a daily basis, eye glued to camera to catch a heron mid flight, like this: 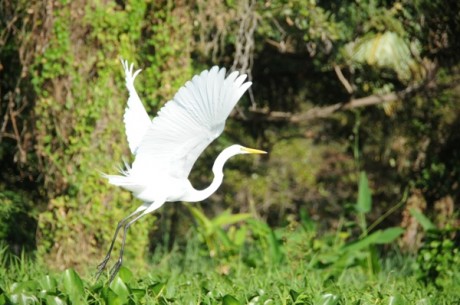 Spied on a boat from Granada, Nicaragua on a trip commonly called “las isletas,” on which I befriended a very nice dreadlocked Dutch man with surface piercings, which I later had to look up and, ow.

And your commute could, on occasion, be “dificultared” (a fabulous Spanish verb meaning somewhere between to make difficult and to obstruct) by cautiously needing to pick your way around thousands of crabs. Actual crabs not pictured, as it’s not the right time of year. But look! Crab-crossing sign. Couldn’t not snap it. 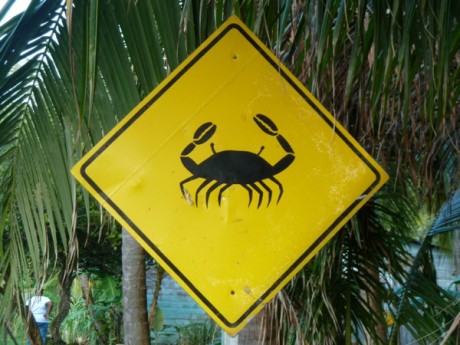 And then, a shot of two species who were never meant to interact, the hand of a tourist together with the front half of a coati, a relative of the raccoon, apparently, and rumored to bite and scratch, and also, not designed to eat human food, but never let that stop a tourist from getting the photo they like, and later reaching out to pet the wildlife. 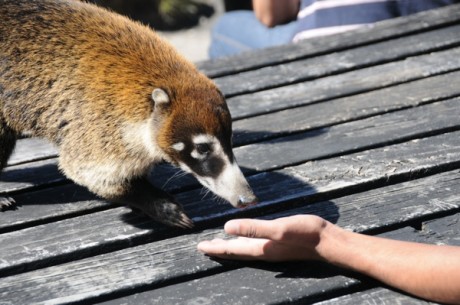 This at the picnic area (where we were admonished not to eat) at Irazu Volcano, Costa Rica, which, by the way, has had much of it’s milky green lake drain off, and is not as visually stunning as it once was.

And then, continuing a tangent that has nothing to do with my morning commute, and everything to do with, hey, there are mice and cats in my hostel in Managua, Nicaragua (though to be fair, this was the only mouse I saw, and he seems well-dispatched). 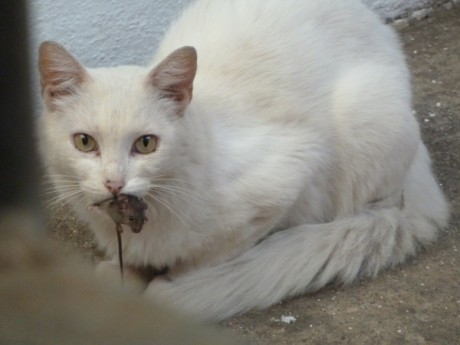 And then, so as not to end on a picture some of you may find disgusting, I leave you with a monkey, which, while not a particularly good picture, reminds me that I’d really like to do some yoga, or at least stretching. Too much bus, not enough tree-hanging. 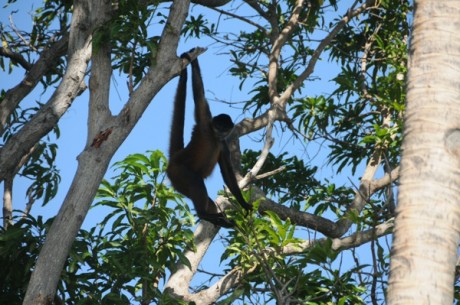 None of these are must-see animals, not rare, not seldom-seen just what you snap when you’re walking around with a camera in your pocket and your eyes open, looking out.

I hope you see something lovely today.