Photographer ambles in the rain in Santiago. Takes pictures. Gets wet. 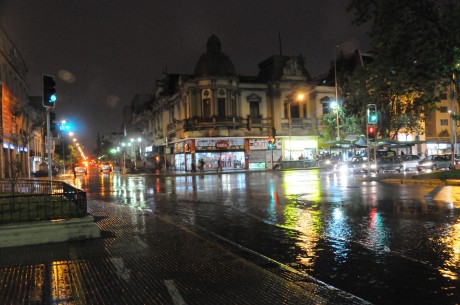 Here in Santiago, where we plan on celebrating the apocalypse with tacos and chocolate (and tequila for the drinkers), we’d been expecting a very unseasonable rain. Basically, it doesn’t rain from November to April. We occasionally get a heavy rainstorm in the middle of summer, but for the eight years I’ve been living here, I have no recollection of a rain in December, and certainly not the pouring down thrum thrum thrum of the rain we had yesterday.

All winter long, I find something to complain about, mostly being cold in my apartment and the feeling I get that there’s a low cloud ceiling and the fear of inhaling deeply, thereby introducing soot into my lungs. Exaggerating a bit, but really, the air in Santiago in the winter? Not entirely breathable.

And then there’s summer. Blaring, bright, stain-your-skin summer. So hot. And dry. And dazzling. And it turns out I don’t like that so much, either. Or at least I try not to spend too much time out in it, what with the drying up from the inside out. So yesterday, rain duly announced, I was more or less glued the window, bemoaning the delay of the rain. And as soon as it started, I went outside. It was a slow drizzle, and I even took off my raincoat, so I could feel the rain on my arms.

And then I came inside, and kept working. And the sun went down. And it started pouring.

So I did what any sensible person would do. I packed up my camera and my tripod and went outside. And I’m so glad I did.

Pictured above is Rooney’s, a misuse of a classic architecture building at the corner of the Alameda and Ejercito. Notice awesome drainage of Santiago streets.

From the bandejón central (sort of a long traffic island), looking east towards the Entel Tower, and I may just have some rain on my lens filter, but so what? 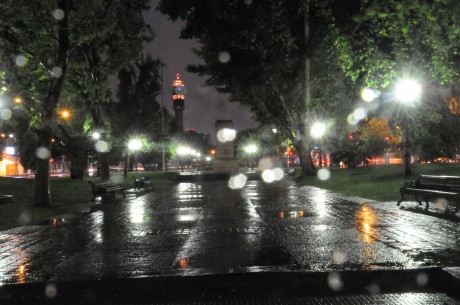 Manuel Rodriguez (I-5 is over to my left, this is kind of the service road for the Panamerican highway/ I-5), and Moneda, looking towards the Huérfanos (pedestrian) bridge. 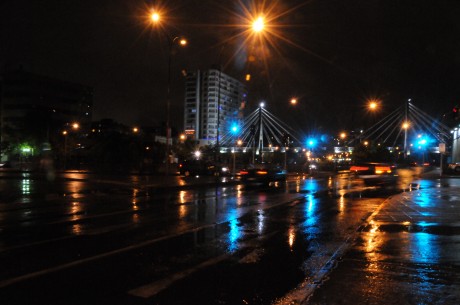 The Huérfanos bridge in the distance, from the sidewalk over the Panamerican highway (and the metro tracks, in the center) at Agustinas. 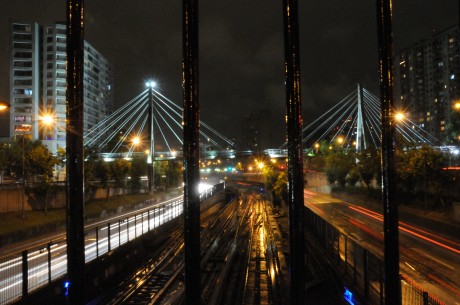 Almirante Barroso, a street I like to call “muddy admiral” for reasons which would be obvious to you if you spoke Spanish. 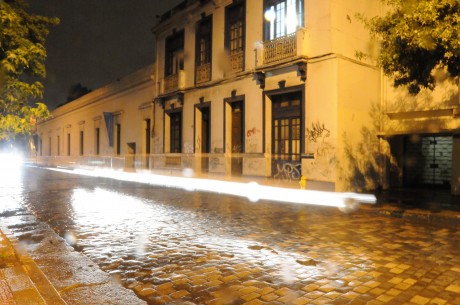 Just some faroles. Oh yes, lamposts. Related to the word faro, which means lighthouse, which I think is a lovely connection, and a nicer word than lampost. 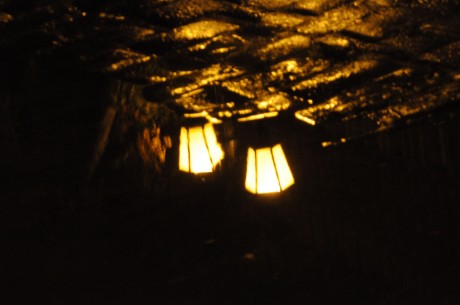 It was a lovely evening, and I was struck with the kind of euphoria about the ridiculousness of what I was doing that I almost wanted to pop into a hostel (for Barrio Brasil is rife with them), to get people to come outside and take photos with me, but I knew I would seem sinister, though I totally wasn’t, and also crazy, which well, whatever.

I was on my toes a little bit, what with the having the camera out in the middle of the darkness, and since Christmas is almost upon us, crime seems to have taken a bit of an uptick. I tried to be pretty conscious of what was going on around me, but while I was squatting down to take that shot of the lamppost lights reflected in the puddle, someone surprised me, a semi-toothed tall, lanky Colombian (from the accent) guy, who had a lopey walk, and kept on saying, “lograste unas buenas tomas?” (did you get any good shots), but I could only vaguely hear him because my blood was thrumming in my ears what with the adrenaline, to replace the sound of the rain which had stopped falling.

I guess I think I did (get some good shots).

And thanks to Santa Isabel for my really awesome camera cover, also known as a plastic grocery bag, which I tore a hole in to poke the lens out through. I think I learned that from Pam, who totally would have participated in this foray, were she not in Seattle at the moment.