Eating a hotdog backwards in Santiago 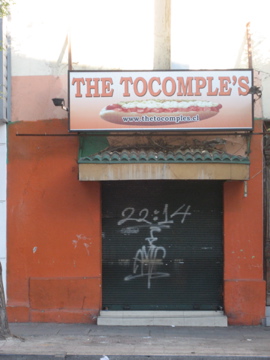 There are so many special Chilean things going on in this picture (of a sign) that I hardly even know where to start. First of all, I have to tell you that one summer, before I realized that science is hard (!), I studied geology at Penn State. I was there on a summer program, the main goal of which seemed to be to teach me what my drinking tolerance was (sorry Mamaj!), and to deflect age-inappropriate advances from young 20-somethings. I was 15. Also, sorry to all the other mothers of teen daughters, but I didn’t tell you anything you don’t know already.

Anyway, the geology thing, is that we would be given an illustration of a geologic sample (rocks, dirt, etc) and we had to say what the processes were (rain drops, fissures, flipping over, these are not technical terms), and what order they happened in. This was the part of the geology class that I loved. Trying to make sense and put order to something that makes no sense.

And so I bring you The Tocomple’s.

There are several processes going on here.

1. First, there is the translation of La to The. Despite the fact that a sign in English would say Hotdogs, not “the hotdogs” or even “the hotdog’s”, they have chosen to a) keep the article and b) translate it to English. It’s not uncommon for a restaurant or snackbar to have a name with an article before it, like La Pizzarita, which is just a few blocks away from this place (in República, off the plaza where a fireman friend of mine used to live and had a telescope which I’m so sure was to spy on neighbors and not the heavens!). The translation to English just makes everything tastier, as I’m sure you know.

2. Rather than completo, which is the word we use for hotdog, when served Chilean style, with avocado and mayonnaise and tomatoes, and isn’t that an italiano and yes it is, but that’s how most people eat it and anyway, you are absolutely missing the point. Here they apply a touch of verés, which is verés for revés. What? It’s like igpay atinlay. Verés is what we call it when you switch around the first and last syllables in a word, for example in the word verés, which itself is revés (backwards) switched around. So Completo becomes Tocomple.

3. Then we have a plural gone wrong and turned possessive, which happens all the time. It’s kind of the Haagen Dazsification of Spanish. Haagen Dazs, a set of nonsense words made to look like they are from some other more interesting language, is a superrich icecream for (in Chile) the super-rich. I used to work at a Haagen Dazs when I was about 15 (before going to Penn State, as it happens), and we had shirts with the flavors written on the back and in the approximate colors of the flavors. My favorite was boysenberry, a dark purple shirt I later gave away when I was in Central America to a guy who had been in one of the early peace corps years in the Phillipines, and didn’t seem to ever get his life back on track about that, but at least he didn’t blog about it at the time (it was 1992).

And there you have it. The Tocomple’s. I have never eaten there, but it is on Grajales near Almirante LaTorre (and actually the worst bikepath in all of Santiago, even worse than the one on Simón Bolivar), and if you’re in the neighborhood, feel free to give a call and I will come and take a picture of you eating your Tocomple. I hope the rropes (perros) in the neighborhood leave you alone.

QED (which is totally not the same as QEPD)