I don’t know about you, but I don’t need little ceramic busses cram-packed with figurines and chickens on the roof. And I’ve seen them in Ecuador, in Guatemala, in Bolivia. Certainly I don’t need one that says Arequipa, Peru. I’m also all squared away on weavings, having bought more than my share at earlier points in life, and long ago learned that I don’t need or use them. I was tempted by the small reproduction rocoto (national pepper, if there is such a thing, in Peru) with a little person inside, but I knew it would just look dumb beside my fossil and rock collection, collect dust, and then probably break in the next earthquake (the fossils and rocks fared just fine, thank you very much).

I wasn’t really looking for anything in particular to commemorate my trip to Arequipa, though I did buy a prettily-colored hat (no earflaps) on my last night in town, which I then wore to a going away party for a friend of mine that’s moving to Buenos Aires. It’s said to be made of “baby alpaca,” which I pray means “wool from baby alpacas” and not actual ground up baby alpacas.

But back to the souvenir. I happened to wander into this shop: 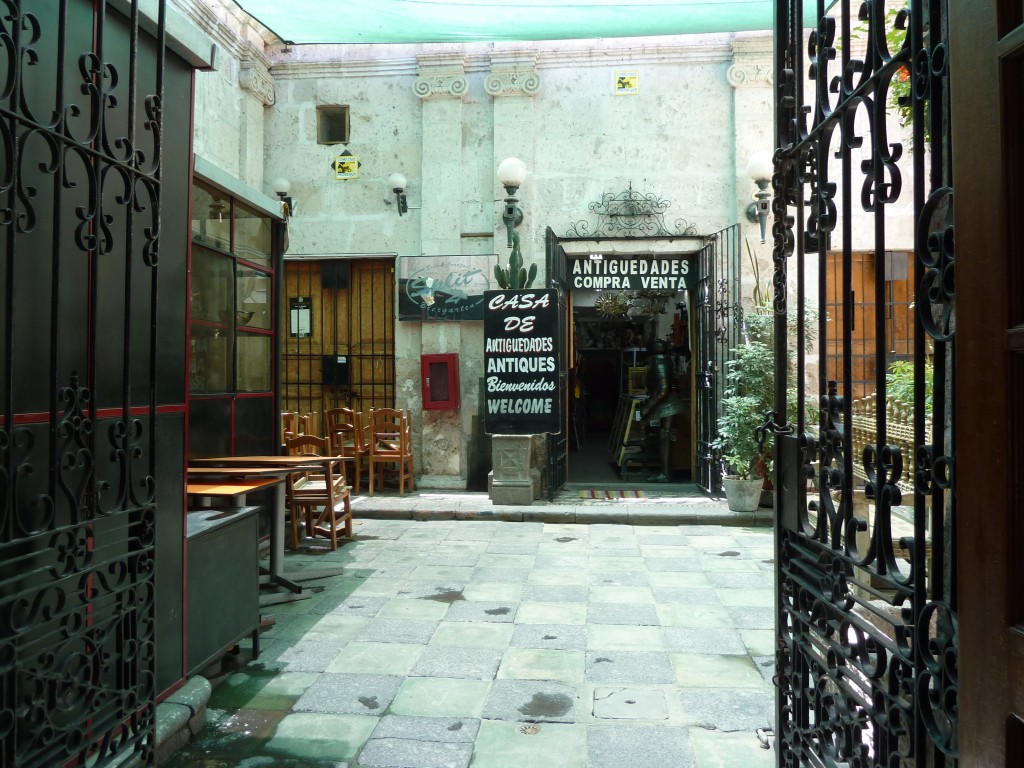 Where I saw all manner of old things. Typewriters, pottery, china, pins, and boxes of 60s and 70s era postcards, with bizarre tones of green and yellow that don’t exist in nature, or at least don’t exist in modern days. Many of the postcards depicted parts of Peru, including many, many postcards of the Plaza de Armas in Arequipa. Here’s a picture I took so you can see what we’re dealing with. 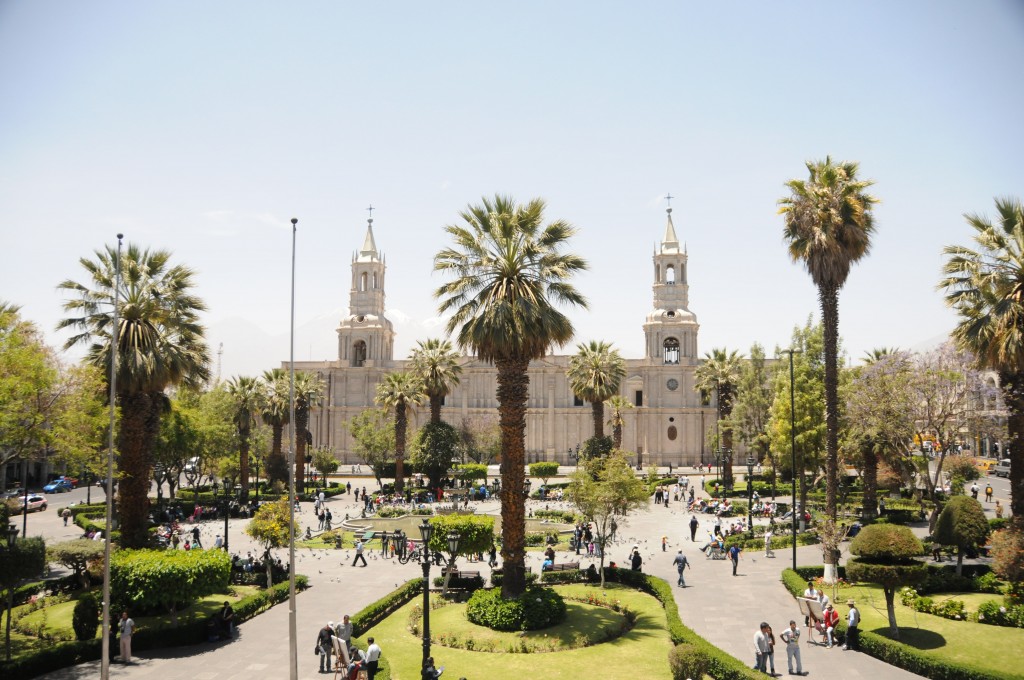 And then there was this. Two soles, about 75 cents for a simple little black and white photo of the plaza, shown here held up in the plaza itself. That’s the Misti volcano, snow-covered in the black and white photo. It had no snow on it on our visit, as it was too late in the season. More pics of mountains in the next post (coming soon). 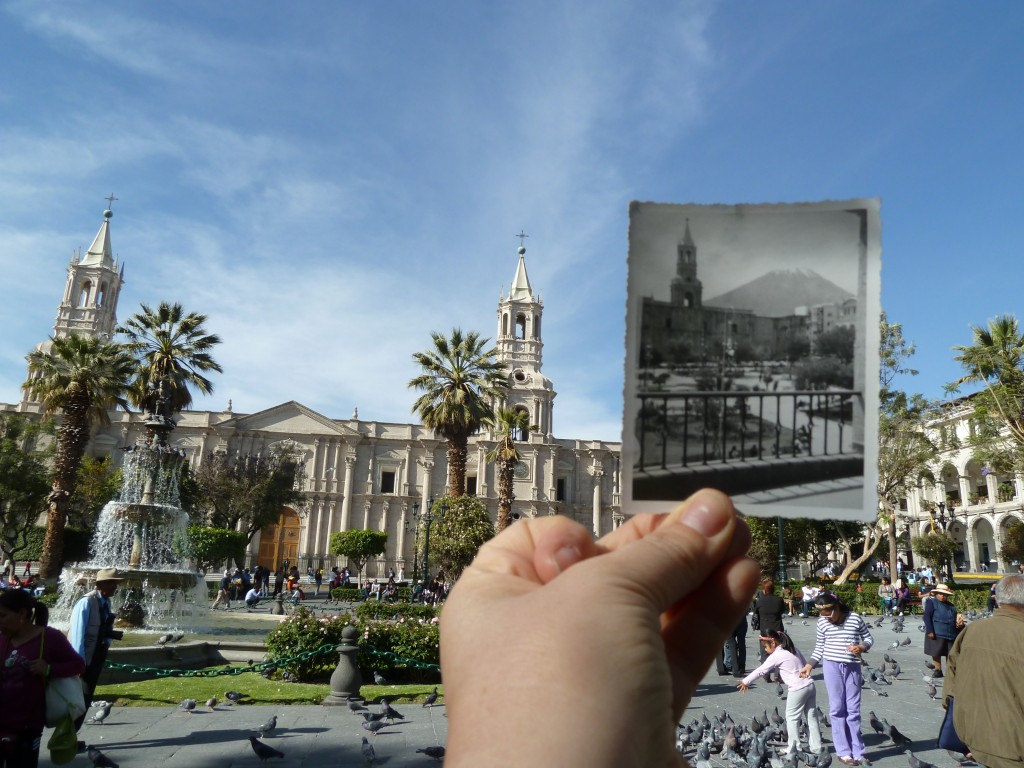 And then I tried to impose it into the shot itself, which required many conversations with many people, and visiting a woman named Maria in her office who found a guard with the key to let me up onto the balcony from which it was taken, but not before quizzing me on my marital status, and assuring me that love knows no age. And the photo didn’t turn out exactly how I wanted, but it was fun to give it a try, and I think I’ve found a new favorite souvenir for wherever I travel. And maybe (finally) a tiny piece of art to hang on my wall (the photo itself, not my recreation, though I’m fond of the above shot and might put the two together in a single frame). 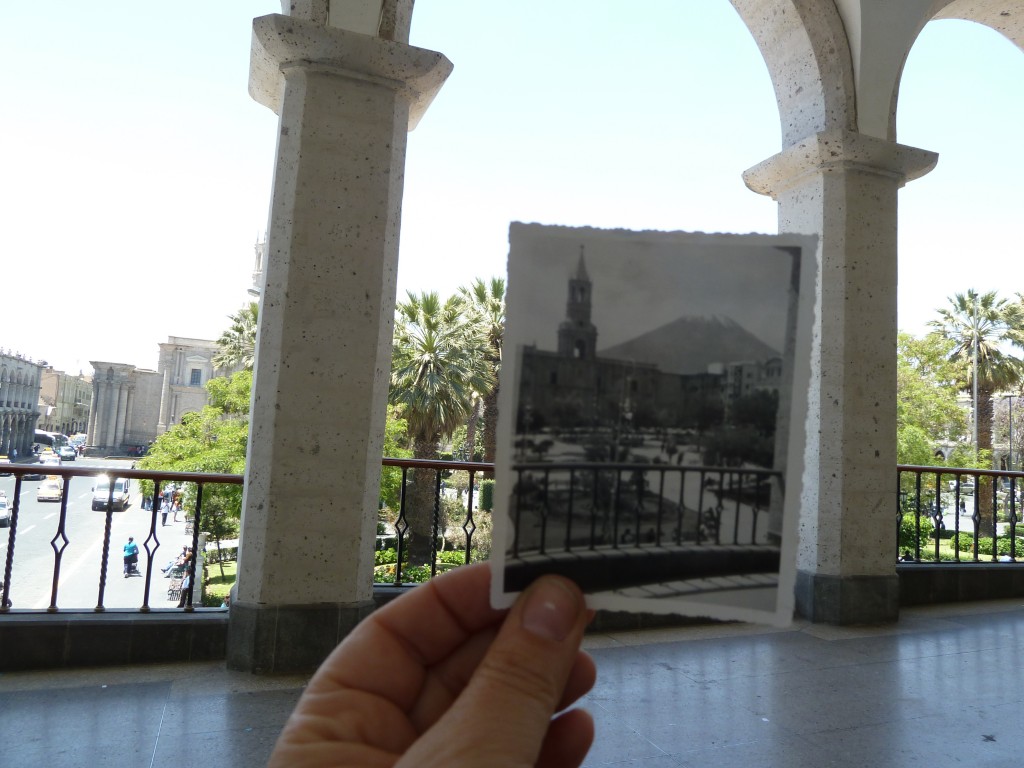 The gauntlet has been thrown down. Whatcha got?

Hat tip to dearphotograph, which may have inspired this attempt, though I can’t remember actually thinking of the site at the moment I decided to do the shots. I love the site though, and you should visit it often.