The one about the cats, in Lima, Peru

We stayed, as many tourists do, in Miraflores in Lima. I had been to Lima once before for work, also staying in Miraflores, and well, it’s a wealthy suburb of a very large, complex city with a serious air pollution problem and more buses than you could shake a stick at.

People at the hotel seemed very keen for us to go on a loop of a walk (before Mamaj contracted a greenish shade of bronchitis), and this we did, connecting where we were to the Parque de Amor with its giant statue of a couple kissing and Gaudi-like mosaics, right on the coast, with people paragliding overhead. We also dutifully checked out the mall on the water, like you do, and then weaved our way back, stopping at Parque Kennedy, which we were assured was Miraflores’ “central park.” More like a giant green plaza, but pretty, tranquil, with people eating turrones (not like the turrones in Chile, these are a layered/stacked pastry, layered with (I think) manjar/dulce de leche), and strangely, picorones (fried pastry in sweet syrup). Strange because a) we don’t really eat food like that on the street in Chile and b) it wasn’t even raining!

And then we rounded the corner and started to see the occassional cat. On some stairs. 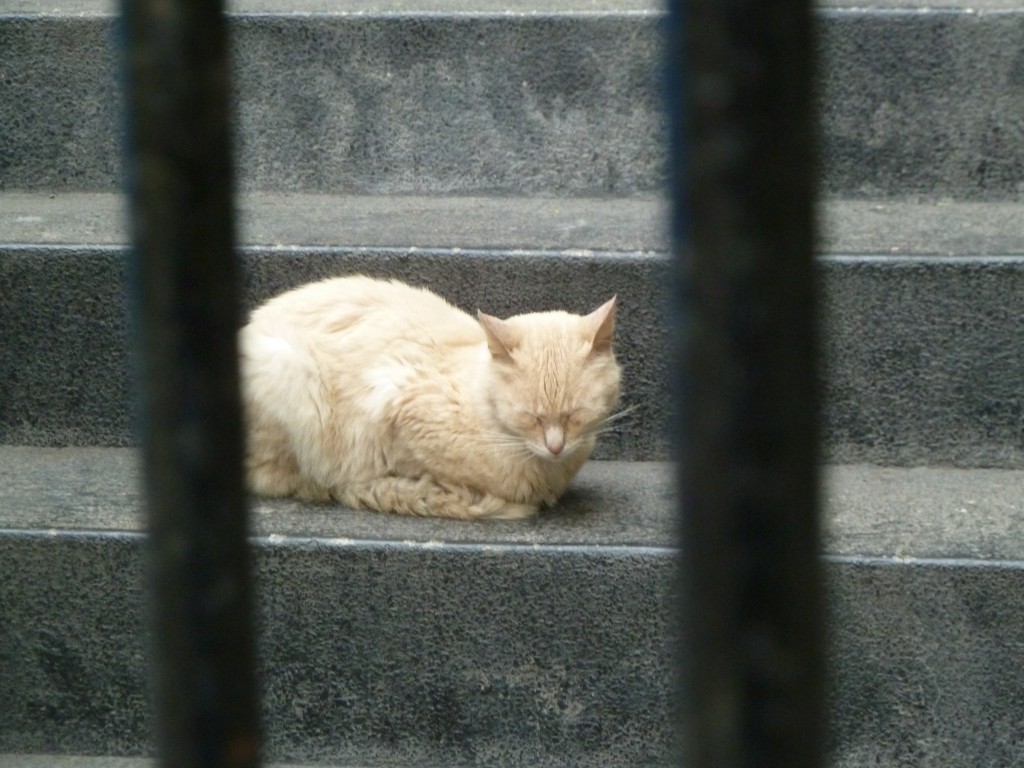 And behind a golden railing: 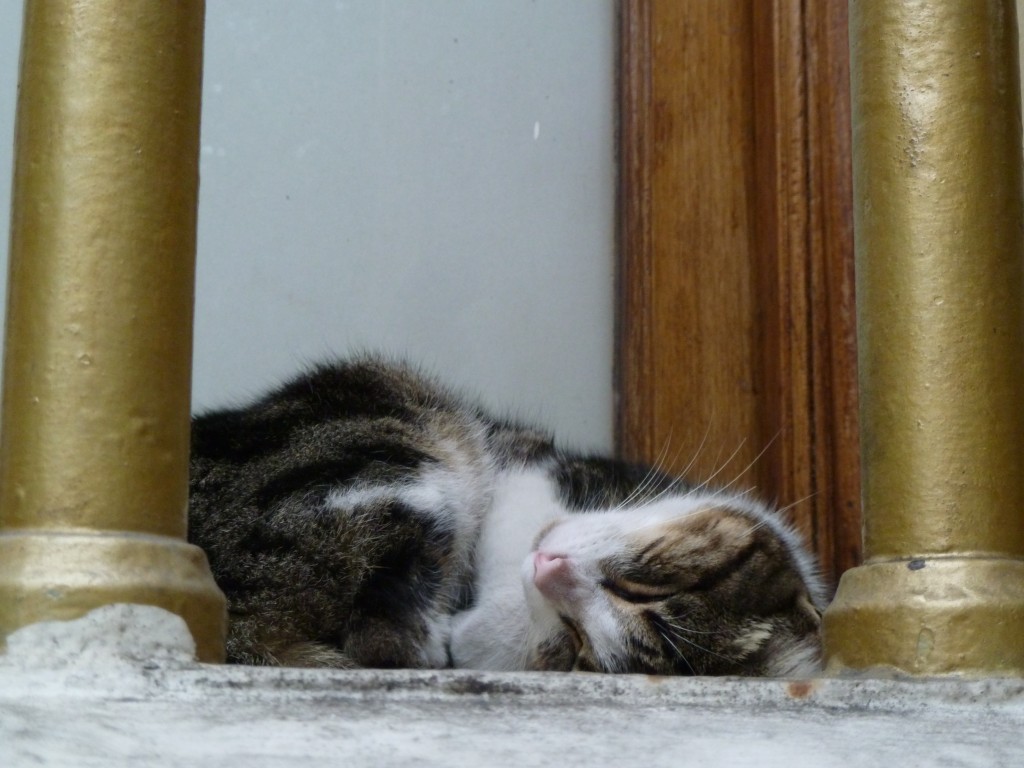 And in the flowers: 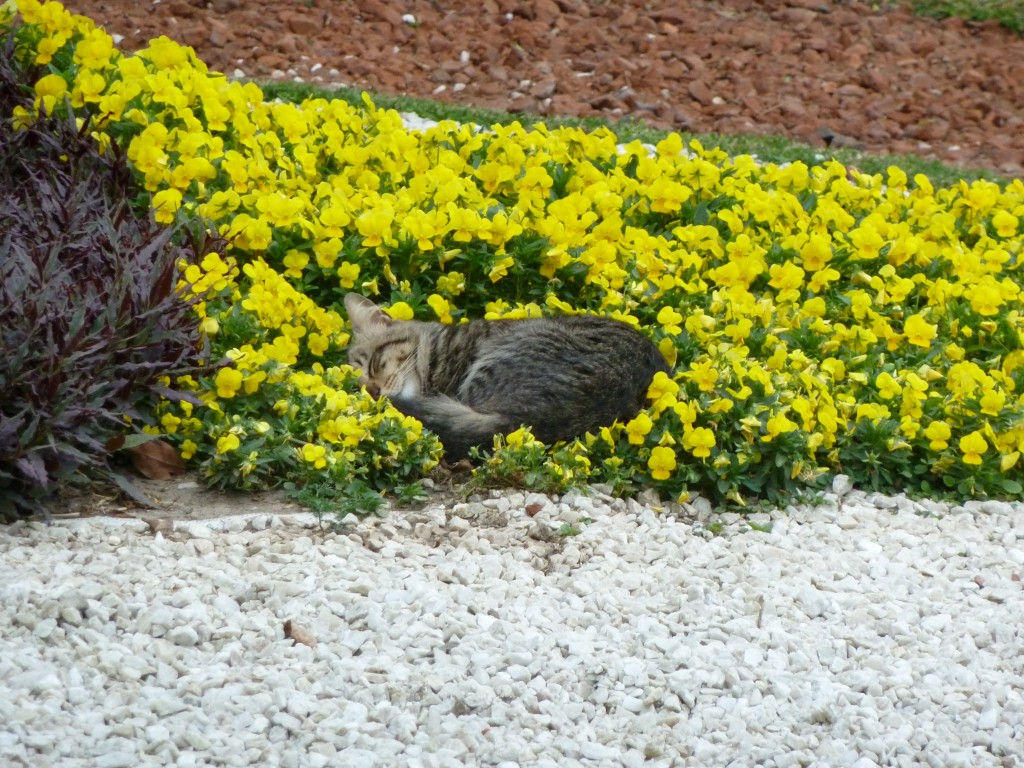 And then we saw that it wasn’t just the occasional cat, it was scads of them: 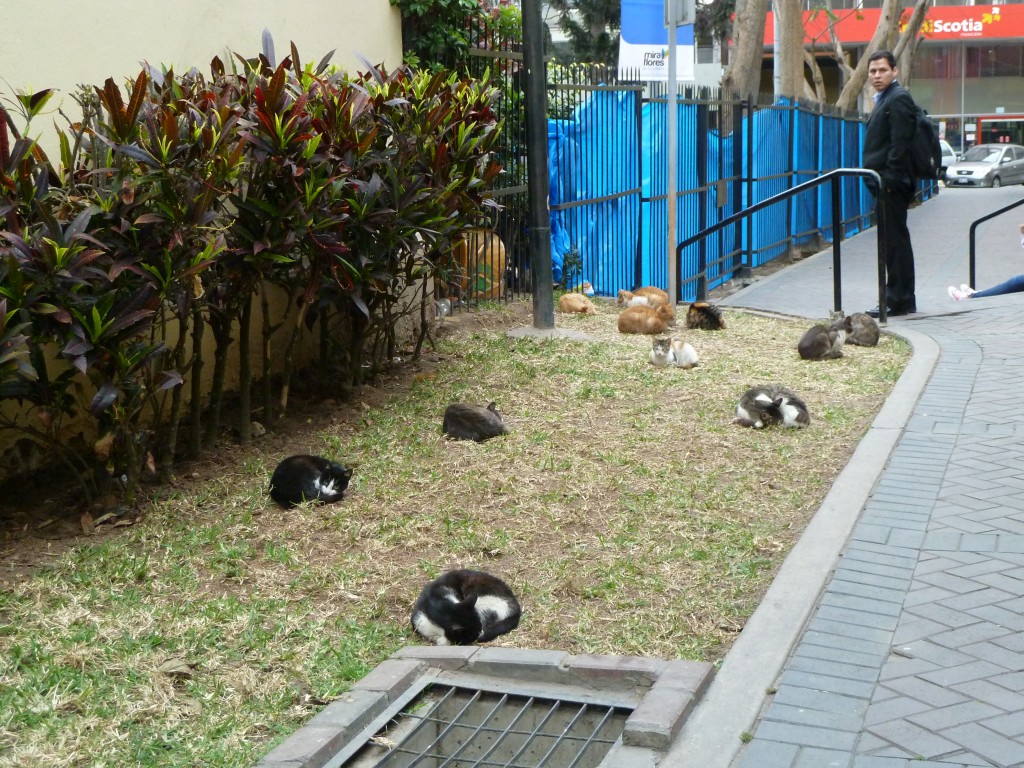 Including this really oddly-pigmented one, which really looks like someone mixed-and-matched some cat parts. (Don’t try this at home)- 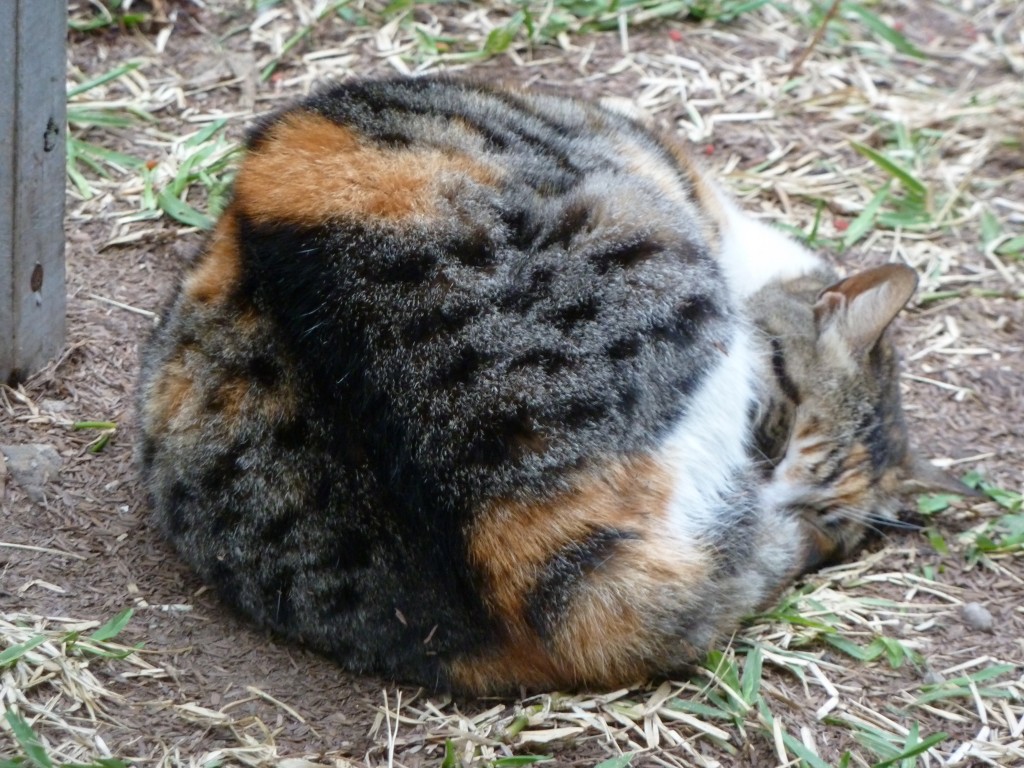 And then we found out it is both illegal to dump cats in the street, though clearly, this rule has been flouted, on at least two occasions: 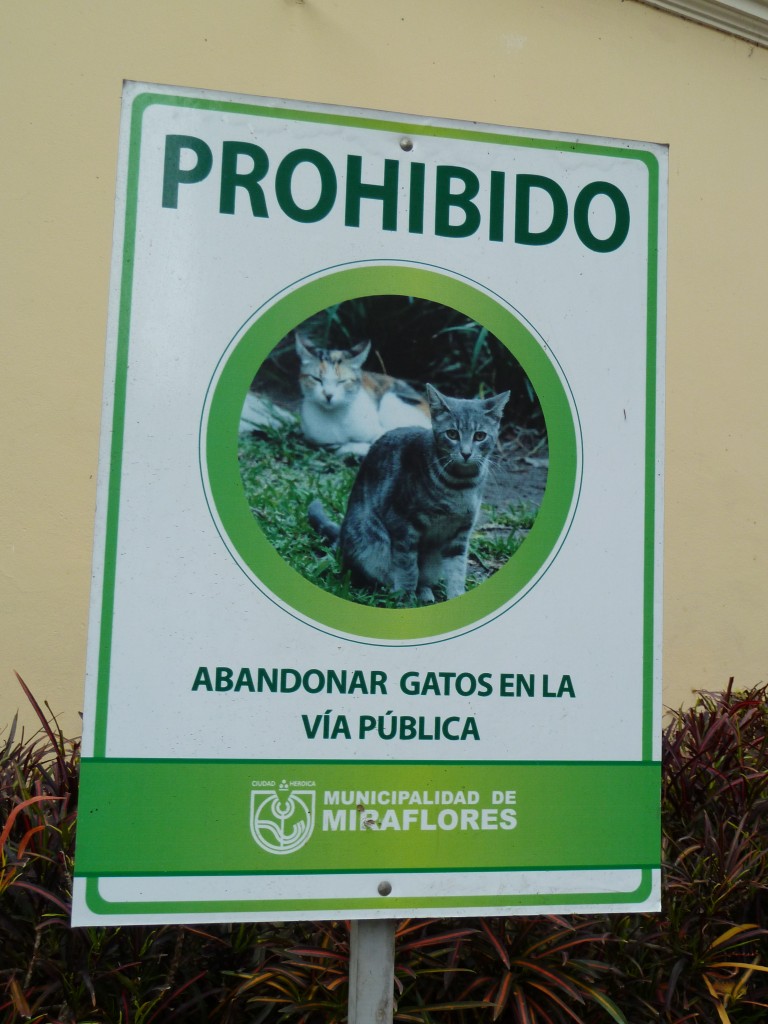 And that nobody unauthorized may feed the cats (which seemed to be fed quite well): 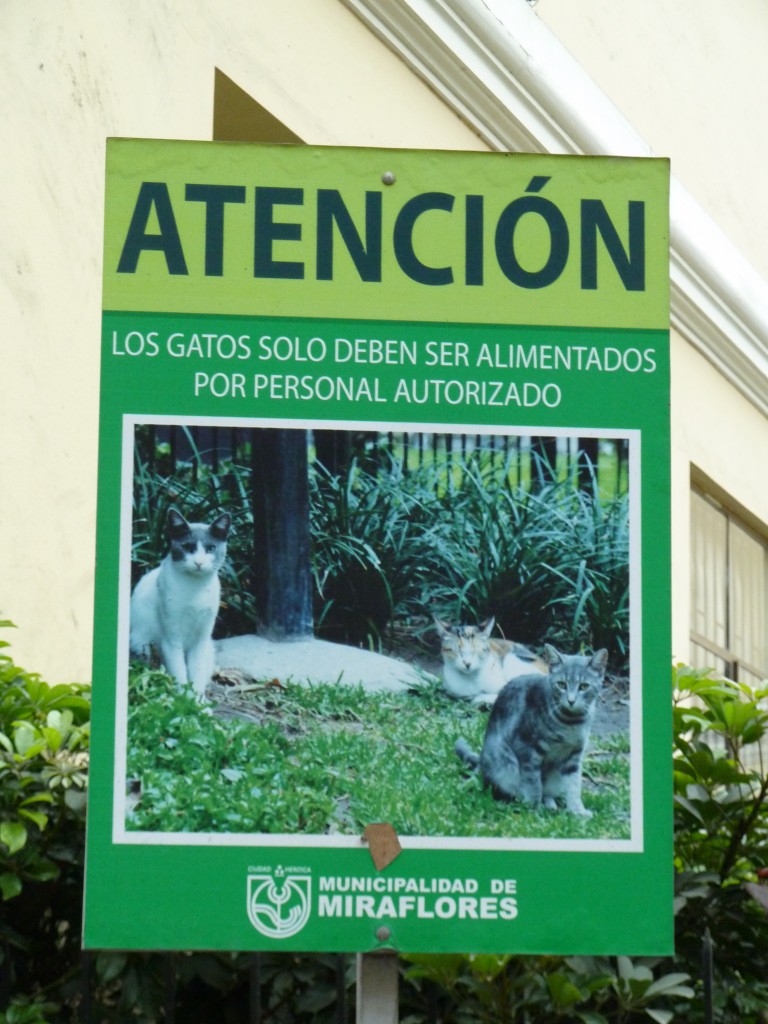 It’s so bizarre (and strangely unsmelly) to see such a large quantity of cats on the street. In Santiago we have a few key locations (down in Yungay there’s a couple) and in the Vega, where they live on scraps and sleep on the vegetables. No dogs were around to bother them, nobody taunted them or poked at them, they weren’t hissing or fighting and they were just curled up against the perma-cloud-cover in Lima, sleeping. Though I did see one beg for some picarón, and get some, and eat it. A dog in Chile would have turned up his hocico (muzzle).

And now, for something completely un-catlike. Pegged jeans? Still in. Me caring about fashion? Never. But it shows the vaguest glimpse of what’s going on in architectureland in Lima, which I owe you, and I will not forget. Now don’t abandon any cats in the street while I’m gone. 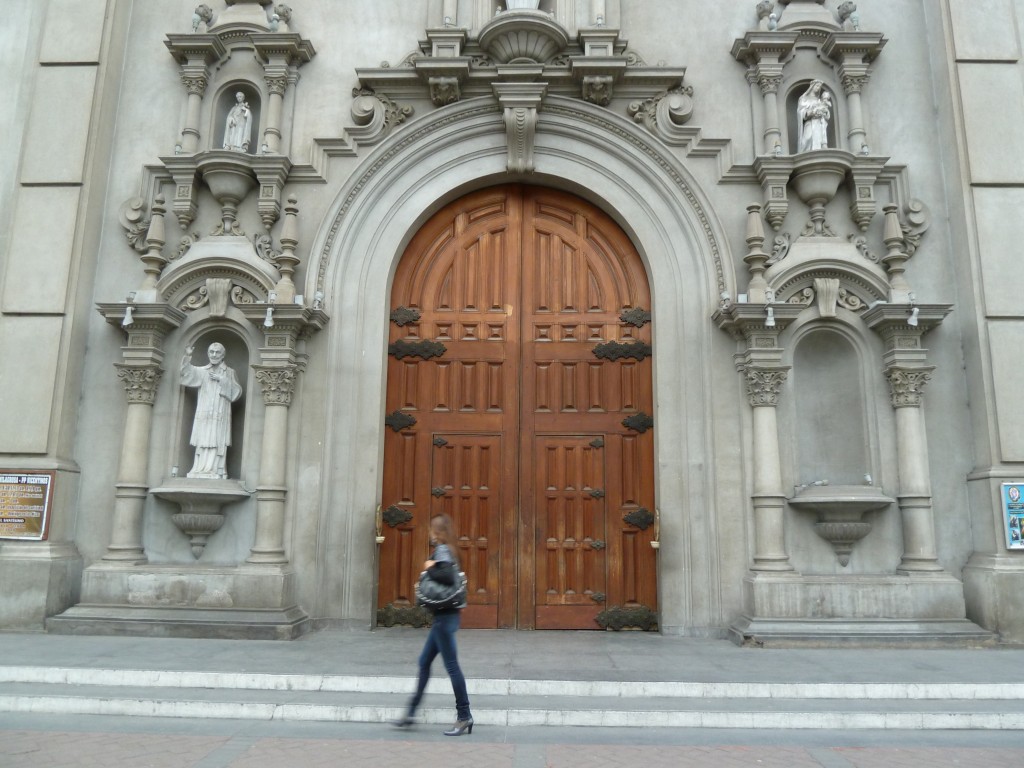