Quina (or 500 pesos, about a dollar ten at today’s prices) is not alot to pay for lunch. Here’s a tale of street food and a gringo who sells black bean burgers on the street. And they’re surprisingly tasty.

Everywhere you go downtown in Chile, some industrious soul has set up a stand (or a box, or just a large bag) from which to sell you food. There’s the sopaipilla (round disk of fried dough, fried fresh) vendors, the arrollado primavera (spring roll, usually out of a box, maybe not-so-fresh) vendor, even people selling what I like to refer to as “sushi of dubious origin.” Nothing against the sushi people, it’s just that if I’m going to get food poisoning, I’d like to be able to track down the guy who sold it to me with more than a “he was squatting outside the Santa Isabel on Huerfanos” to help me.

So, food en la calle (on the street). There are empanadas, the occasional sandwich de potito, a sandwich filled with foul-smelling entrail of-some-sort, which people gobble up readily. In the summer there are cubos, which are frozen cylindrical packs of juice. Down where I live there are papas rellenas (stuffed potatoes), and downtown at night there are often anticuchos (meat on a stick) sold by women who use shopping carts to hold both the grill and the meat.

And then there are the soyburgers.

“Hamburguesas de soya!” they shout, say or mumble as you walk by. They sell burgers made of TVP (textured vegetable protein), or “soy meat,” that petrified beigey brown cat-food-looking stuff they sell at the supermarket. I guess it’s reconstituted and mushed up, slapped on a bun with some mayo, and for 500 pesos you can slake your hunger (can hunger be slaked?).

Soy burgers are fine. I have eaten two since being here in Santiago, one on the Universidad de Chile architecture campus as part of a fundraiser, and one on the street after the Tuesday critical mass ride. They were fine. One had a little garlic in the mayo, and that made it edge out its competitor. In general, I’m not a big fan of soy, and knowing that almost all of what we get here is genetically modified sort of takes the bang out of your burger, you know? But these have been the main vegetarian option for street food, and the only kind of burger sold.

Enter the black bean burger. Recently I was at a website launch for FoodyChile, Colin Bennett’s ode to food here in Chile, with an online store and a bunch of interesting walking food tours around Santiago and other food tours farther afield in Chile. A guy I was talking to said, “hey, ask that guy over there what he does here in Chile.” So I turned around, looked at the guy in question and said, “Hey, what do you do in Chile?”

And he started his elevator pitch. Only it went on and on. He (Ben) sells black bean and lentil burgers outside of Universidad de Chile (the main building, right outside the metro) a few to five days a week. His biggest take? During the protests he sold 120 burgers one day, though some days he struggles to sell 30-35. He invited me to come by one day and try them out.

So I did. I was on my way back from the gym, and I crossed the street and there he was. 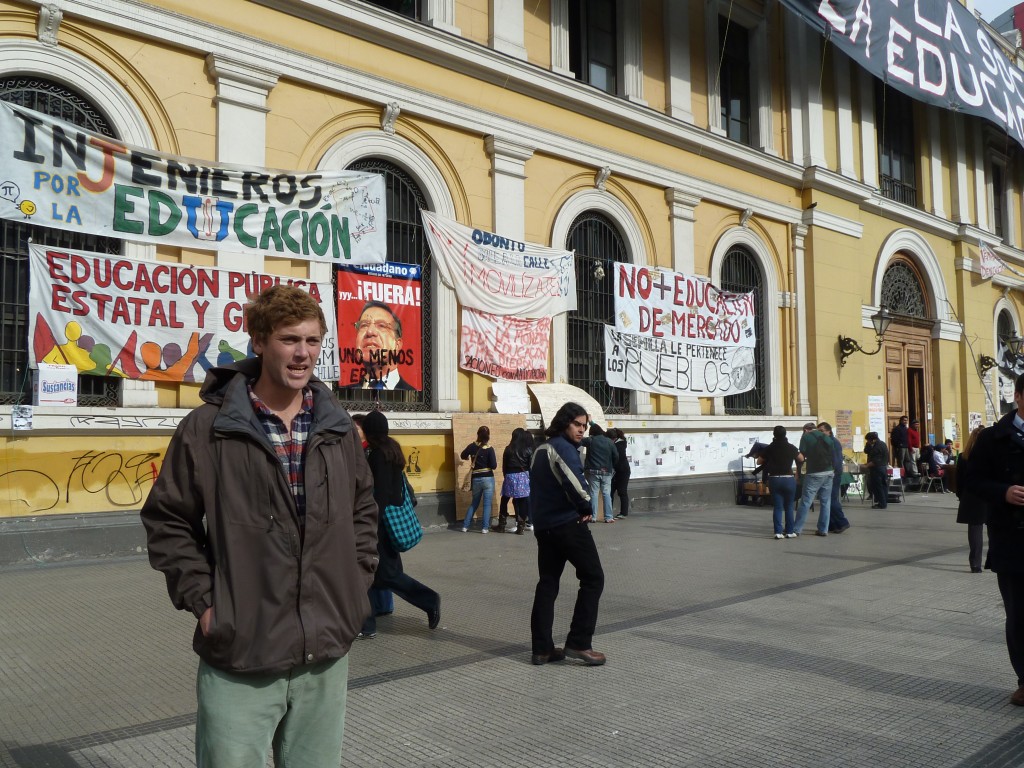 With his box, displaying the two kinds of burgers and both the original sign and his new, improved signs. 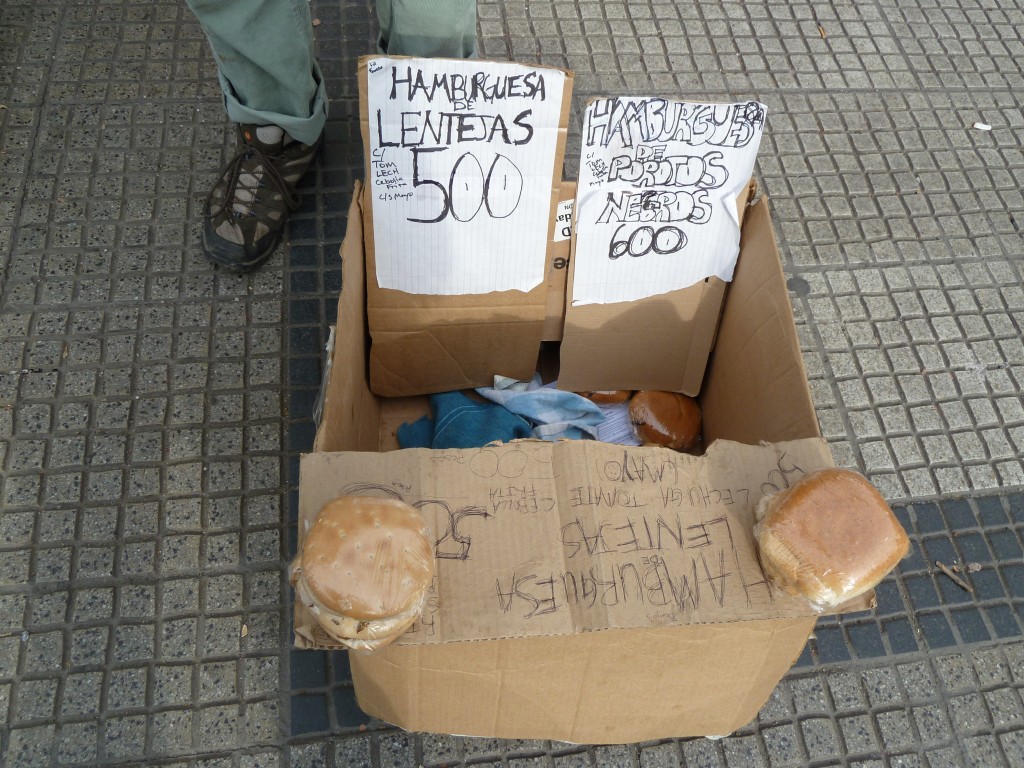 I bought a burger (he gave me a deal on the black bean one, selling it to me for 500 pesos, though the price is listed as 600). And put it in my bag. Then I realized I was hungry, so took it back out and investigated.

What’s it got? Well, here’s a fairly unflattering picture of the “burger,” (but if you take a picture of a closed burger, it just looks like a bun with beans poking out) and it’s got a bunch of beans, lettuce, tomato, and a sauce that’s he said was “like thousand island.” (those are Ben’s hands) 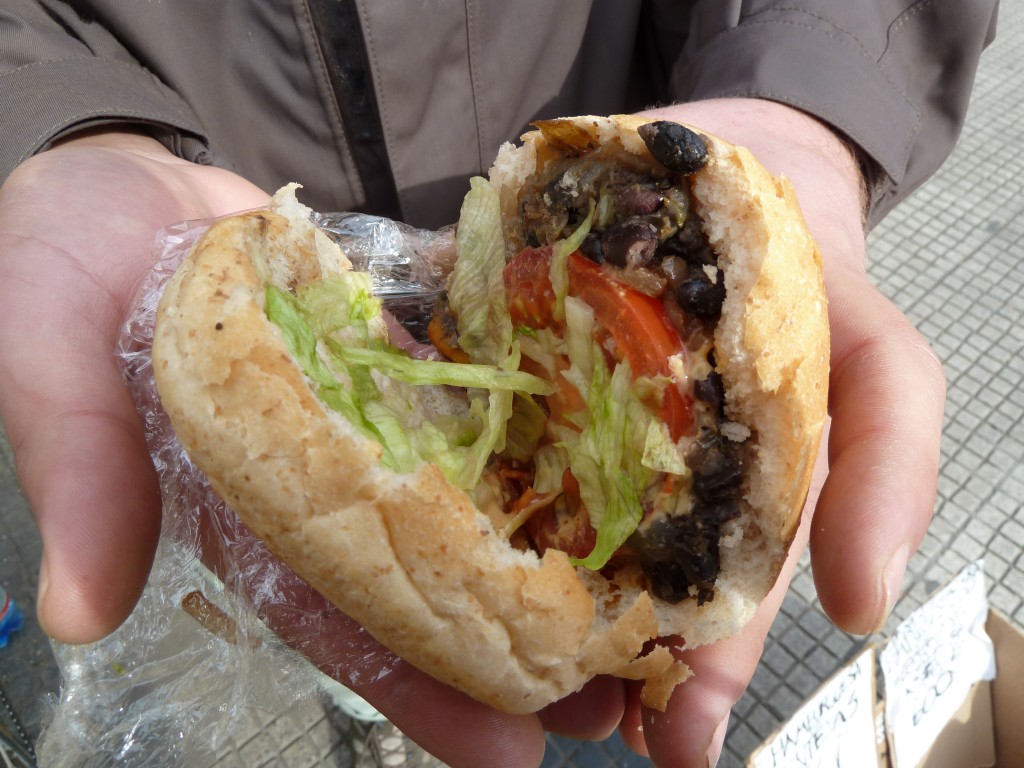 So what’s the verdict? Tasty. Not really a burger, per se, since the beans have not been mashed together and fried. I think this would improve the burger, but seriously hurt his bottom line, since it would take much longer. He’d have to charge more, and 500 pesos is the going price. The sauce was nice, and there were sauteéd onions and I could taste a little cumin and garlic, which I also liked. The bread (which he doesn’t make) was just okay, but I’m not a bun person, so don’t hold it against him. It was neither hard nor gummy, so I’ll give him that. The lentil burgers he serves on hallullas, but he said he’s thinking of changing that up.

Down the road, Ben’s looking into getting cards, a sign, and probably even tweeting where he will be and when. Creating a following would go a long way towards keeping his business afloat. One regular came up and bought a lentil burger from him while I was there, and he gave another one away to a budding newscaster who’d interviewed him recently.

Best of luck to Ben and his budding business. Go down there one week day between 12 and 3 and grab your burger (though a new teaching gig may mean he’ll have to scale down to 3 days a week). He’s got a good patter “Receta de mi abuela, directo de California, hamburguesas de lentejas, hamburguesas de porotos negros.” (Grandma’s recipe, straight from California, lentil burgers, black bean burgers), and definitely the best black bean burger in town. Tell him bearshapedsphere sent you!