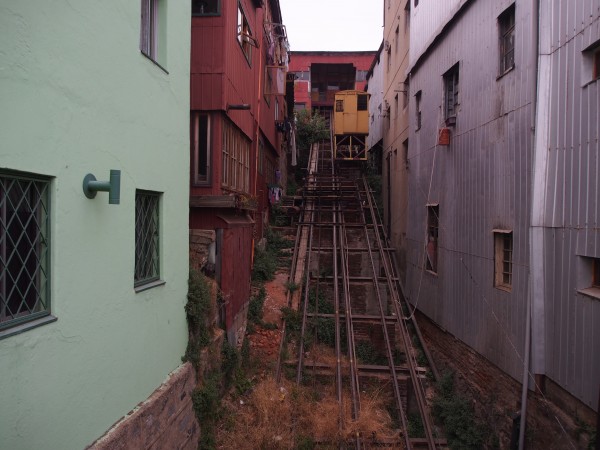 The allegedly soon to be repaired Cerro Mariposas funicular.

If there’s one city in Chile that I have a complicated relationship with, it’s Valparaíso. On the one hand, it’s an easy place to get to from Santiago, often sunny and cheerful, colorful and bright. On the other hand, it’s impenetrably confusing, like a map had a baby with a bowl of spaghetti, and then someone threw it down a flight of stairs, and then up again. And I have no sense of direction at the best of times, and I’m always two hills over from where I’m trying to be, and there’s a giant ravine between me and where I’m trying to go, and it’s often full of trash.

But then there are glorious parts of Valparaíso. A freeze frame of years ago, the bakery on Condell and somewhere with little cookies like the ones we used to get in the red and white string tied bakery box from my childhood in Brooklyn. And shops that sell nothing but springs and bolts, and then the boastful nature of colorful houses, each one brighter than the next on the few hopping hills that everyone spends time on, Cerro Bellavista, Cerro Alegre and Cerro Concepción. I think I’ve figured out what bothers me about Valparaíso is the ways in which it reminds me of the have and have nots in Chile. There are places where it seems like muggings are more likely (or I in fact, know of people who have been mugged there) and there are spots where it always smells like sewage. But this is life. The difference is that in Valparaíso it’s all a bit jumbled up together, and I can’t precisely choose to go only places that I feel comfortable. And that being said, I have a pretty wide range of areas I feel comfortable in, there’s just something about being semi-lost and a little concerned for my safety that triggers my get-me-out-of-here gene like nobody’s business.

But in Valparaíso, especially up in the hills, people say hi to you. “Buenos días,” they respond, if you call it out, or even just “buenas,” especially if it’s early in the morning, and you’re alone. And it’s a small gesture, but it feels welcoming, and it’s not something typical of the city I live in, though due to the great key misplacement of 2015, which I will one day tell the story of, my neighbors all know me and say hi.

Anyway, I was in Valparaíso today on a fact finding/work research mission, and I have to admit, I probably haven’t been since February of 2013, when I last shot the crazy downhill bike race. I brought a medium-sized, less-showy camera than I might have to some other places, and wore sturdier shoes, because I wasn’t really sure what the day would bring, other than (in part), a construction site. And I ran up and down a trillion stairs and the two people I’d gone to meet were incredibly helpful, and I ate really, good food (if you click here, you will get to the instagram that I share with a friend wherein we run around and eat really good food, and the fish is on me, and the meat on her, because that’s how we roll).

A tiny preview of said food (details in the insta). 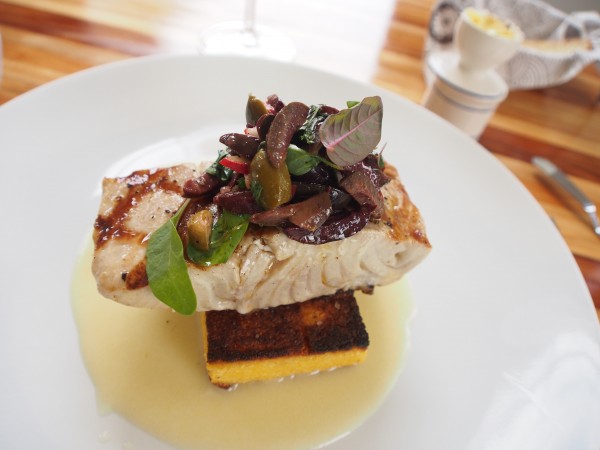 And I also thought about the fact that one of the people I was talking to today reminded me that if you don’t hire someone to paint a mural on your outside walls in Valparaíso, people will tag it. So people pay artists to paint murals, and there are many different kinds of motifs, but one of the ones you see a bunch includes scenes of Valparaíso. That’s right, this is a city that is decorated with pictures of itself. All three murals show the funiculars, few of which are still working, but plans are afoot to get some of them up and running again, including the Cerro Mariposas one there’s a photo of above. For what it’s worth, the all-day overcast weather was not typical for this time of year, I even got drizzled on. 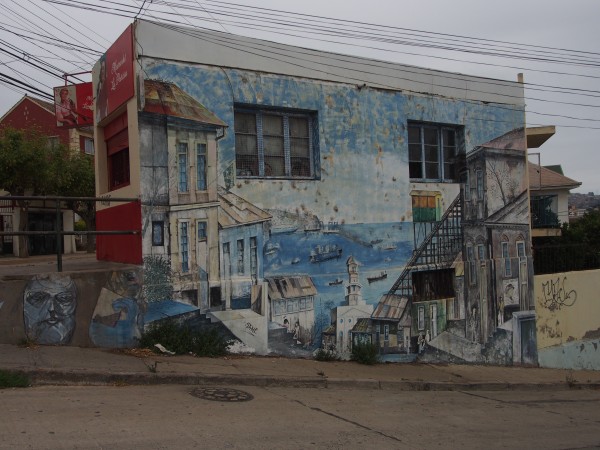 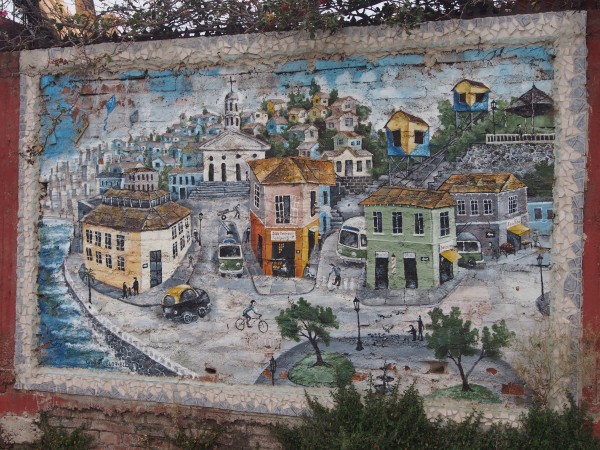 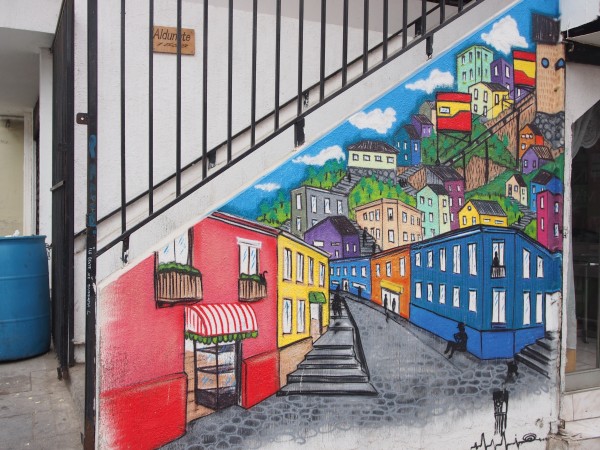 And as I ponder the reductive nature of, do those murals of Valparaíso have murals of Valparaíso on the walls within (not that I can see), I have to admit that maybe what made me love Valparaíso more than usual today (aside from the food) was the fact that I was talking to porteños. And they love their city so much that they hire people to paint pictures of it. With so much New York/London/etc. paraphernalia everywhere in Santiago, it’s kind of nice to see a city that believes it’s the center of the universe, even if much of it appears to be perched precariously on hillsides that are secretly laughing at me because once again, I have no idea where I am.