Shriveled like a sun-dried tomato in the Santiago sun

The sun in Santiago wants to kill me. Of this I am convinced. Every year I tell the quirky little tale of how I think there are four seasons in Santiago. And they are fall, spring, summer one and summer two.

Summer two, I explain, to anyone who will listen, is when you’ve had three months of summer and you’re just done, but there are still three months to go. This summer, as you in the northern hemisphere have dug out and dug out and dug out again, we have had an uncharacteristically warm summer, with 35 degree days where formerly there were none, and many days in the 32-34 range. Many, many days.

But don’t take my word for it. I thought to myself, one day, when I was taking in my dry laundry after it had been on the line for twenty minutes, and again when I went to take something off the ledge by the window in the kitchen and found that it was hot to the touch, that I could easily make sun dried tomatoes at home. 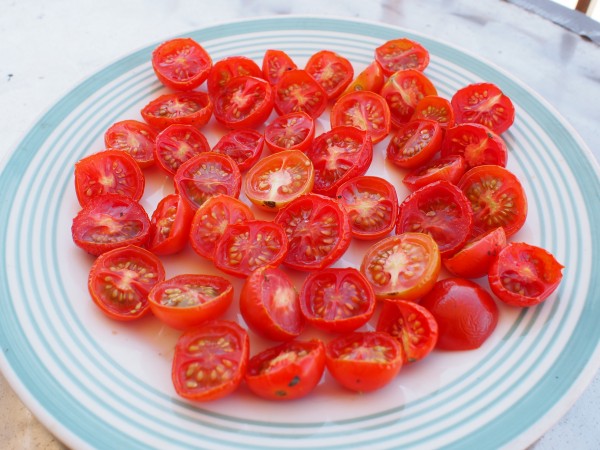 Then I left them outside, whereupon they shriveled, but not quite as quickly as I might have liked, so I moved them inside, beside the heat-seeking kitchen window. I face east, and get the morning sun from the time the sun pops up from behind the mountains until it starts beating down on people’s heads sometime around 1 PM. And here they are, a few days later. 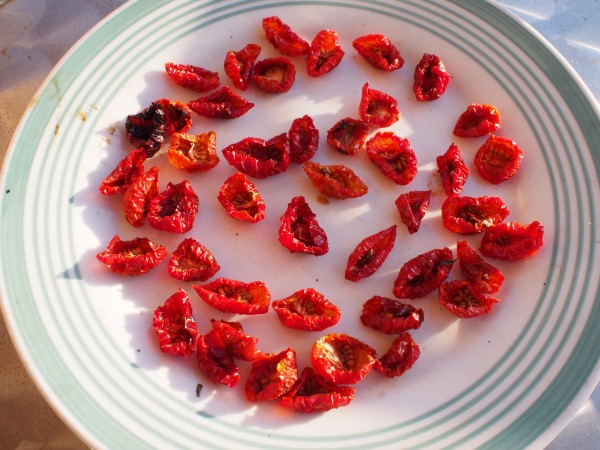 Verdict: sweeter and crunchier than I expected, better as a snack than with pasta, or maybe would have been good with pasta, but I didn’t get that far, and just crunched my way through.

I wonder what else I could dehydrate (besides myself) in the Chilean summer, which when I left, was up to about summer 3. Apply sunscreen, and repeat.

I made a second plate, drying them only inside, and they dried a bit faster.
They are sitting in a container awaiting my return from that very same north where you may or may not currently be freezing, thus the radio semi-silence. I am hoping the summer has, if not completely receded, at least dissipated by the time I get back. In the meantime, I’ve had below freezing, snow, rain, and up to t-shirt weather in the last five days. But no sun dried tomatoes.